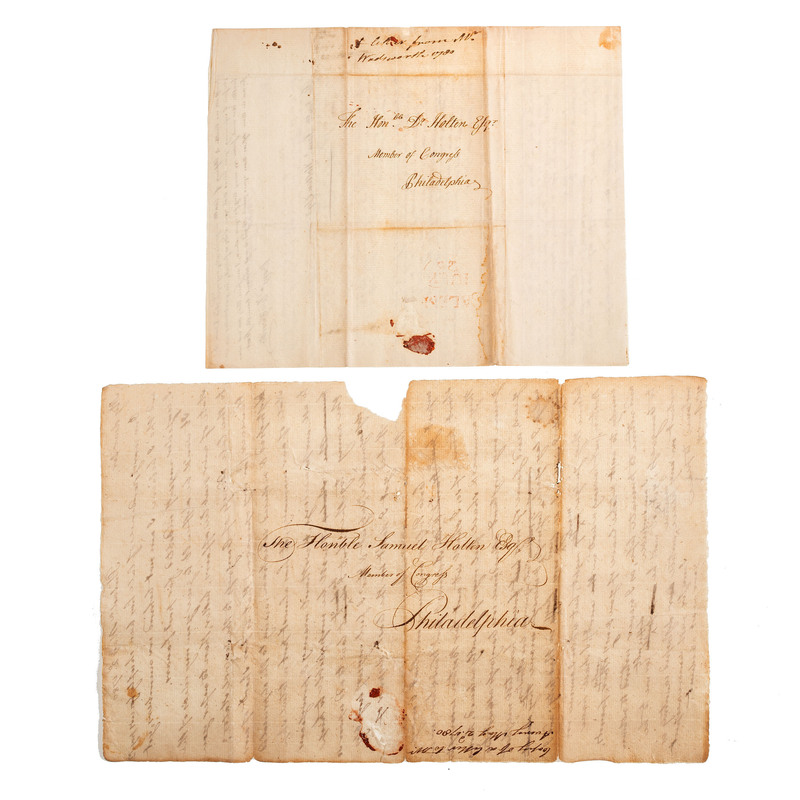 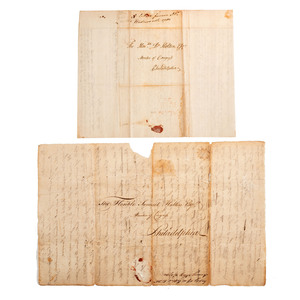 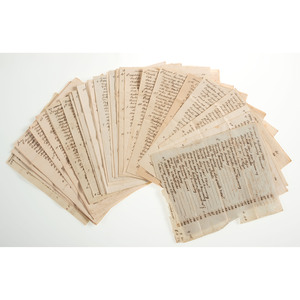 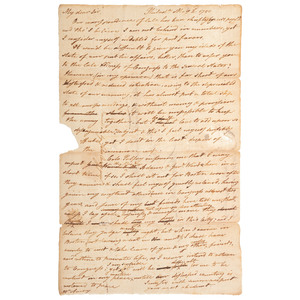 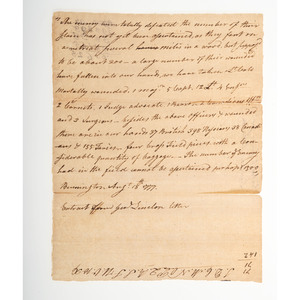 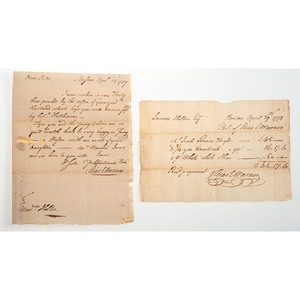 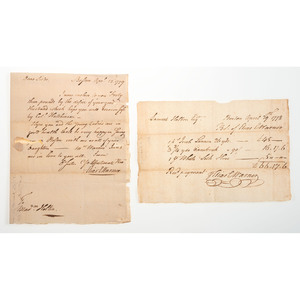 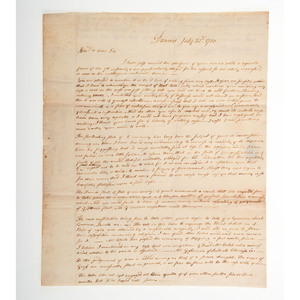 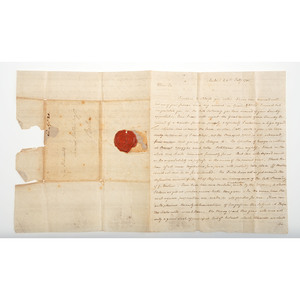 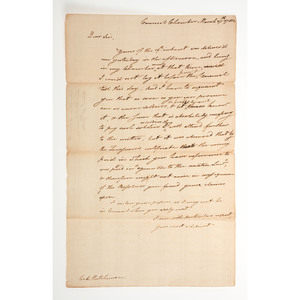 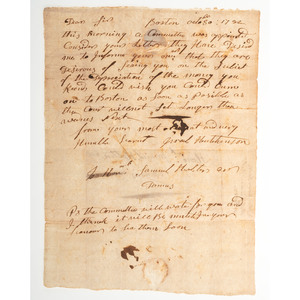 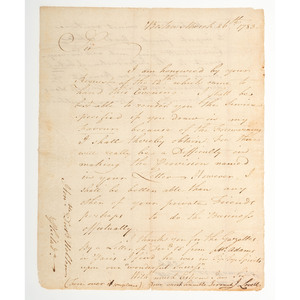 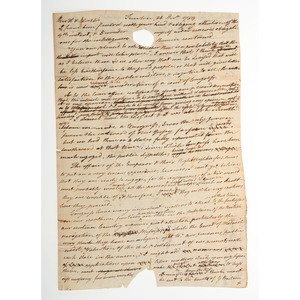 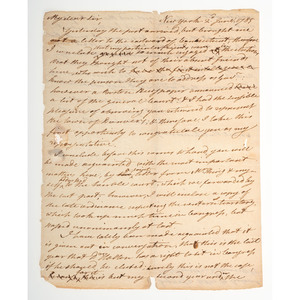 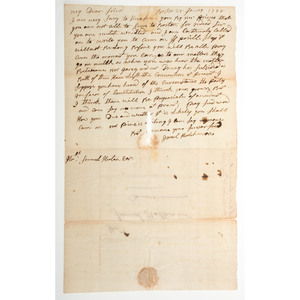 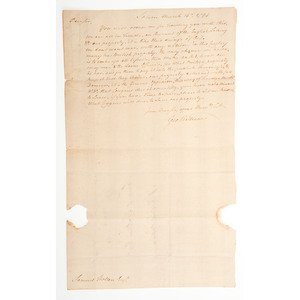 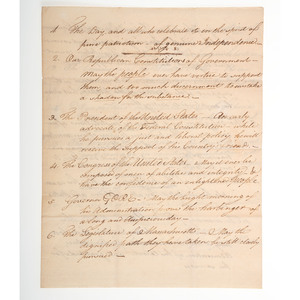 more than 200 letters spanning 1741-1815 (bulk 1780-1799). Majority are unsigned, draft copies of letters written by Holten and sent to family, friends, and fellow politicians, each meticulously cataloged in his hand with a note identifying the intended recipient and the date written. Most correspondence unfolds during later stages of the Revolutionary War, and during critical early years of the new nation as the Massachusetts state constitution was written, the US Constitution was drafted, and as states and politicians debated and approved these documents. A smaller selection of letters in the archive was written to Holten, from correspondents including: Revolutionary War hero and statesman, HUTCHINSON, Col. Israel (ca 1727-1811); educator and statesman, LOVELL, James (1737-1814); diplomat for the United States in Paris and to Spain, CARMICHAEL, William (ca 1739-1795); and Massachusetts minister, WADSWORTH, Benjamin (1750-1826). References to George Washington, John Adams, John Hancock, Joseph Warren, Elbridge Gerry, and more.

Physician by trade and politician by passion, Samuel Holten was a zealous Patriot who dedicated his life to public service. Born in Salem Village (now Danvers), Holten studied medicine and was a practicing physician in his hometown as hostilities with the British reached a crisis point in the 1770s. He served as a major in the First Essex County Regiment militia. Alongside such notables as Paul Revere, Samuel Adams, and John Hancock, he began his political career serving as a member of the Massachusetts Provincial Congress from 1774 to 1775 and the Massachusetts Committee of Safety in 1775. Holten served as a Massachusetts delegate to the Continental Congress from 1778-1780, and the United States in Congress Assembled 1783-1785, and 1787. During his terms, he signed the Articles of Confederation and was elected to serve as the legislative body's president pro tempore in August 1785. In 1792, Holten was elected to the US House of Representatives for the Third US Congress. At the state level, he was a member of the 1779 Massachusetts constitutional convention; served as a state senator from 1780-1782, and in 1784, 1786, 1789, and 1790; and served on the Governor's Council. In 1796 he was appointed judge in Essex County Probate Court, a position he held until his resignation in 1815.

The earliest documents in the collection (4 in total) are dated 1741, 1749, 1762, and 1767 respectively, and bear little relation to the rest of the archive. Documents from the 1770s (11 documents) are mostly personal in nature but begin to introduce Holten's political activity, most strikingly in a document identified by Holten as "A Copy of a Complaint from [sd?] Town Clerk of Salem & warrant thereon." Dated June 1777, the document was drafted in response to a May 1777 Act of the State of Massachusetts Bay, "An Act for Securing this and other United States against the danger to which they are exposed by the internal Enemies thereof." Holten's draft indicates that on the 27th of May "the selectmen of said Town of Salem did lay before said Town a list of all such persons belonging to said Town as they did know or believe have been endeavoring since the nineteenth day of April In the year of our Lord one thousand seven hundred and seventy five to counteract the United struggles of this and the United States for the preservation of their liberties & privileges," and continues then to name such persons and authorize their arrest. As a Justice of the Peace, Holten was one of the men to which the document was addressed. Four additional documents relate to Boston merchant Elias E. Warner (ca 1749-1781), brother of Holten's wife Mary Warner Holten (1737-1813).

More than 100 documents span 1780-1790, with another 50 documents dating from 1790-1799. Comprised almost entirely of letters, this correspondence elucidates, in part, the difficulties of the legislative process at the state and national levels, the political side of military conflict, and the hardships endured by those on the home front during the Revolutionary Era. Documents include: a draft letter to John Avery, Philadelphia, 2 May 1780, in which he describes the state of public affairs as a "distressed and reduced situation, owing to the depreciated state of our currency, it has almost put a total stop to all our proceedings, & without money & provisions it will be impossible to keep the army together"; Holten's draft letter to the "Honorable President of the Senate of the Commonwealth of Massachusetts," 3 Nov. 1780, requesting leave to resign his seat in Congress, noting that "[he] had given my constant attendance for more than two years" but was now desirous to render service "in a place that will not require my being so long absent from my family"; a letter from James Lovell, 8 May 1781, noting that "the States in most Credit for Compliance with the requisitions of Congress are very back[?] and the affairs of the Continent are consequently in a most alarming Situation"; Holten's draft of the "Report upon D Warren's acct. April 1782" which details how the state of Massachusetts will provide funds to Dr. John Warren for the maintenance and education of the children of Dr. Joseph Warren, deceased hero of the Battle of Bunker Hill; and a letter again from James Lovell, 26 March 1783, offering a glimpse into the ongoing peace negotiations happening in Paris, noting that "by a Letter of Mr. Adams in Paris I find he was in Tip Top Spirits upon our 'wonderful Success.'"

As the war drew to a close Holten and his fellow statesmen turned to the business of running a country. Honoring payments to soldiers continues to be an area of discussion, as does the legal documents being drafted to establish laws of the new nation. Writing to "Mr. Wadsworth" while serving as a member of the Confederation Congress in 1784, Holten notes that "Congress have [sic] many important matters to attend to at this time the fortresses on our northern frontiers & within our lines are still in the possession of the British; our western Country requires great attention particularly the navigation of the Mississippi River which the Court of Madrid may think they have an inclusive right to; our finances, public credit, evaluation [?] of the US and settlement of our accounts with each state in the union" being among his tops concerns. In a draft letter to Col. Israel Hutchinson written from New York on 2 June 1785, Holten references the landmark Land Ordinance of 1785, noting that he will "enclose a copy of the late ordinance respecting the western territory which took up much time in Congress, but passed unanimously at last." Writing to Holten from the Massachusetts Ratifying Convention in Boston on 25 January 1788 and again on the 28th, Col. Hutchinson updates him on the progress there and the conflict between the Federalists and Anti-Federalists: "I suppose you have heard of the circumstances the party in favor of Constitution I think [has?] grown But I think there will be proposals of amendment and can say no more at present." On the 28th he offered this: "we have now got to the Judiciary power mutch [sic] said for and against it" with the proposals differing greatly and amendments being offered. Correspondence in this era also includes letters between Holten and family members, including son-in-laws John Kettell (1749-1801) and Lake Webster (1755-1800). Of note is that Lake Webster appears to have acquired an amount of debt which he could not pay, and which landed him in debtor's prison in Philadelphia as noted in his letter to Holten of 1 March 1786.

The remaining 38 documents (1800-1815) include material related to Holten's work as Probate Judge, though most are personal in nature with the majority being correspondence from family members most notably his grandchildren, George Osgood, Israel Putnam, Eleazaer Putnam, Porter Kettell, and Samuel Holten Webster.

Condition of documents varies, though most are generally good. Letters are typically legible with creasing at folds, many with tears along fold lines.

A HISTORICALLY SIGNIFICANT ARCHIVE DEMONSTRATING THE TUMULTUOUS NATURE OF THE REVOLUTIONARY PERIOD AND THE DEDICATION OF THOSE PATRIOTS ENDEAVORING TO CREATE A NEW NATION.