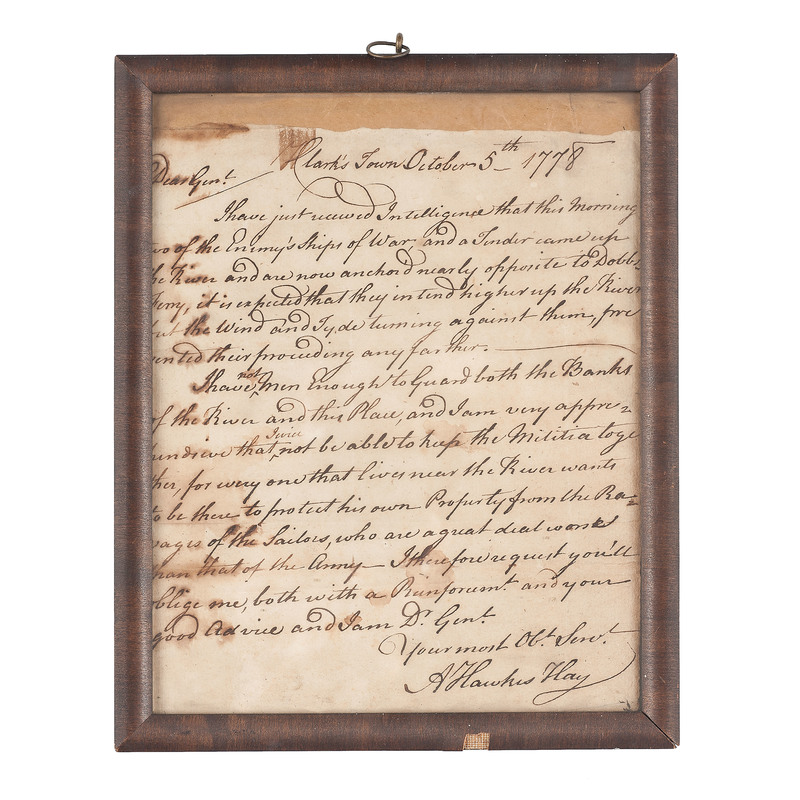 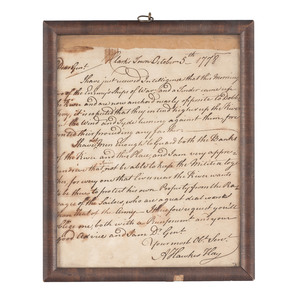 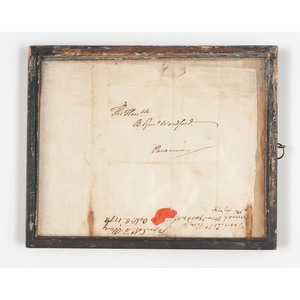 Hawkes begins the letter by informing Woodford of his latest findings: "I have just received Intelligence that this morning two of the Enemy's ships of War, and a Tinder came up the River and are now anchor'd nearly opposite to Dobbs Ferry, it is expected that they intend higher up the River but the Wind and Tyde turning against them, prevented their proceeding any farther."

He continues by warning Woodford about his potentially perilous situation, writing, "I have not men Enough to Guard both the Banks of the River and this Place, and I am very apprehensive that I will not be able to keep the Militia together, for every one that lives near the River wants to be there to protect his own Property from the Ravages of the Sailors, who are a great deal worse than that of the Army." Hay then closes the letter with a request: "I therefore request you'll oblige me, both with a Reinforcemt. and your good advice and I am D. Genl. / Your most Obt. Servt. / A Hawkes Hay."

William Woodford (1734-1780), a Virginia native, served as a lieutenant in the Cherokee Expedition previous to his service in the Revolutionary War. Serving as a delegate to the Third Virginia Convention as the war approached, Woodford was appointed colonel and placed in command of the 2nd Virginia Regiment, in which capacity he participated in the first significant battle of the war to take place in Virginia. Known as the Battle of Great Bridge, this conflict took place on December 9, 1775, and ended with Woodford driving Lord Dunmore from the Norfolk peninsula, signifying the end of royal authority in Virginia.

Woodford's regiment was ordered to join George Washington's Army in New Jersey in December of 1776, becoming part of the Virginia Line of the Continental Army. Promoted to brigadier general in February 1777, Woodford and his men fought at the Battle of Brandywine, where he was wounded; the Battle of Monmouth, where he crushed the British Army's left flank with artillery; and the Siege of Charleston, where he was captured in 1780 and taken aboard a British prison ship. He died on the ship on November 13, 1780 and was buried at Trinity Church in New York.

Ann Hawkes Hay (1745-1785), a native of Kingston, Jamaica, served as a colonel in the 2nd Regiment of the Organ County, New York militia, in which capacity he observed enemy operations in the Hudson River's Haverstraw Bay. Hay reported to George Washington, detailing the actions of the HMS Phoenix and the HMS Rose, on July 25, 1776, and about enemy operations against Peekskill, New York on March 23, 1777. As a result of British raiders burning down his house and farm in the fall of 1777, Hay went to live in present-day West Haverstraw at his brother-in-law's residence, which also notably served as Washington's headquarters for a short period in July of 1778.

Letter with some damp staining, discoloration, creasing, and brittleness at edges. Ink dark and bold. Not examined outside of frame.