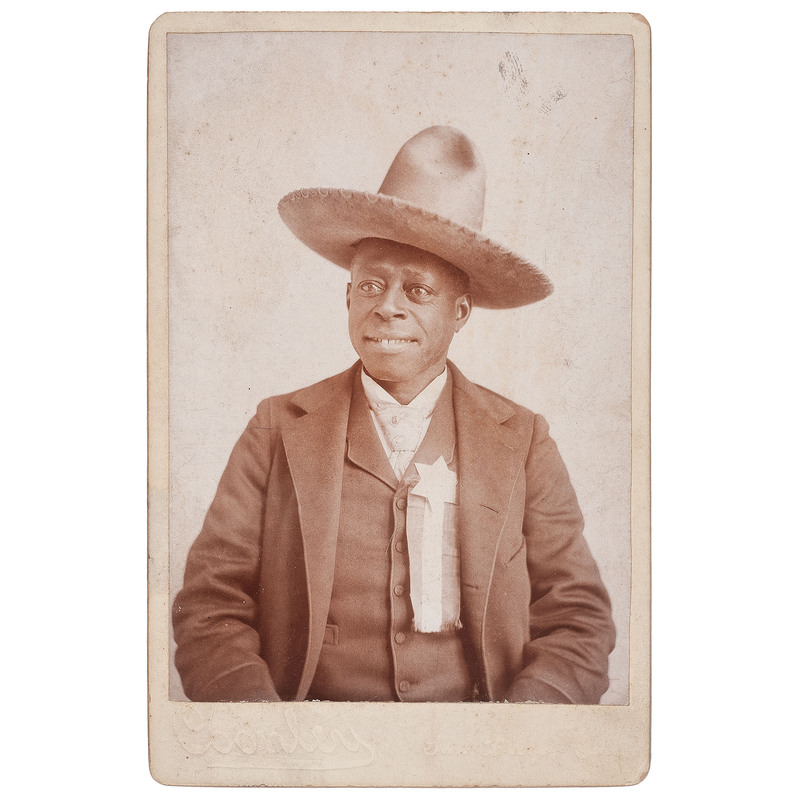 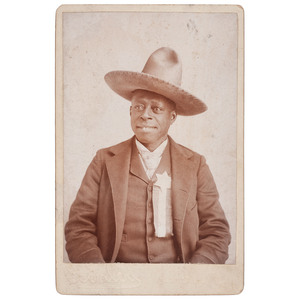 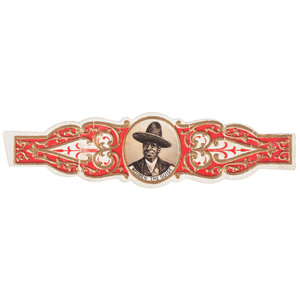 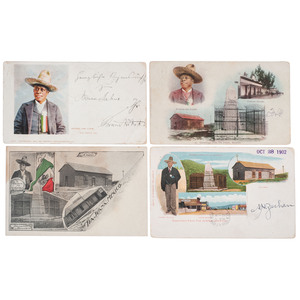 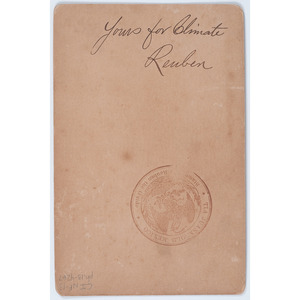 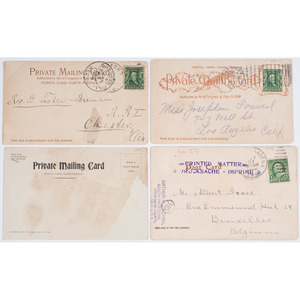 Cabinet card studio half-length portrait of Reuben the Guide. He wears his signature suit, a tall sombrero hat, a ribboned star badge, and a tie with a fanciful pattern. [H.E.] Coonley: San Diego, California, n.d., circa 1890. Signed "Yours for Climate / Reuben" on the verso alongside his typical stamp, "Tia Juana, Old Mexico / Stamp[ed b]y Reuben the Guide."

Postcard with color print of Reuben the Guide after the Coonley photograph, captioned "Reuben, The Guide, San Diego, Cal." Detroit Photographic Co.: Detroit, 1901. With a note in German sent to a Rev. B. Larsen in Bremen, Germany. Postmarked Jan. 3, 1908.

Reuben "the Guide" Williams was born in Kansas City in 1856 and came to California in 1864, first to San Francisco, then to Los Angeles, and finally to Tia Juana (as it was then spelled). Around 1889, he began working for the National City & Otay Railroad escorting tourist parties to points of interest along the Mexican border when he adopted the name, "Reuben the Guide." In an 1894 article on Tia Juana for the San Francisco Chronicle, Mabel Craft described him: "The interesting character of Tia Juana is Reuben, the guide...He is the most picturesquely dressed individual in town. He, and he alone, wears a sombrero, and two months ago he married an Indian woman. His comments on the passing landscape are very humorous, and he stands on the steps of the bus and rolls his eyes. Reuben alone is worth the price of the trip, for one hears the philosophy of the man who has compressed sixty years if life into thirty, for one can live fast even in Tia Juana."

A tourist could have many ways to remember Reuben. He smiled for Kodak pictures; his likeness was included on postcards and cigar bands; his name was headlined in promotional broadsides; he was mentioned in tourist guides; and he was described in newspaper and magazine articles. He stamped the back of the cabinet cards, (which invariably showed him in his signature suit and sombrero), “Tia Juana, Old Mexico. Stamped by Reuben the Guide.” He often added his signature and “Yours for Climate.”  When he died in January 1903, he was remembered in five lengthy obituaries including those in several different San Diego newspapers, the San Francisco Chronicle, and the Los Angeles Times. One stated that he had been working on a manuscript of his life story.

There must be scores of snapshots of him in photo albums around the world. Several articles mention that Reuben posed for photographs, but no one said it more teasingly to the collector of all things Reuben than did Henry S. Kirk in his article in the December 1902 issue of the Overland Monthly:"…The people climb into the busses and the horses start down the dusty, winding road into the river bed. At this end of the excursion is Reuben, the guide. Reuben has been written about by everyone who ever writes anything about Tia Juana, and those who cannot put him on paper put him in their kodaks. Reuben is a remarkable personage, well informed of the things of Tia Juana, and well able to tell of them. He wears an immense sombrero, gorgeously decorated with bullion and colored cords. He speaks Spanish like a Mexican, only his color and his good humored volubility suggesting his Dixie origin.”