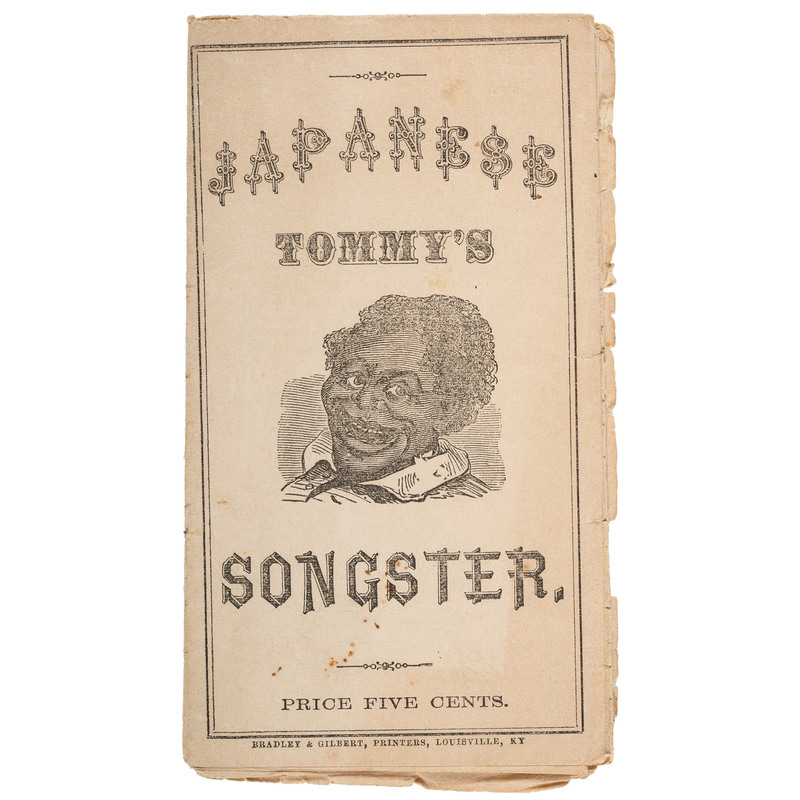 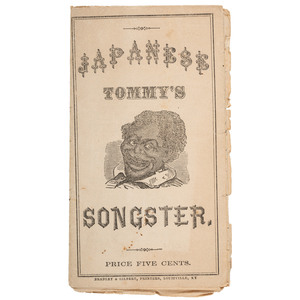 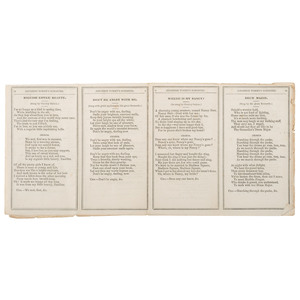 Presumed FIRST EDITION. A small folded pamphlet with the titles and lyrics of thirteen songs with brief details about their performers: "'Don’t Be Angry With Me.' (Sung with great applause by the great Bernardo.), 'Rougish Little Beauty.' (Sung by Charley Sutton.)," and "'Come Back to Erin.' (Sung with unbounded applause by Japanese Tommy." Only known copy, with only one (possibly later) edition printed by Tucker (Portland) at Brown University. The Brown copy lacks the portrait to the cover and only shares three songs in common.

Thomas Dilward (1840-1887), better known by his stage name “Japanese Tommy,” was an African American little person who performed in blackface minstrel shows in the mid-19th century. He and William Henry Lane were the only black men known to have performed with white minstrel companies before the Civil War. Dilward sang, danced, and played the violin, while also often performing female roles in drag.

His stage name is possibly derived from the arrival of the first Japanese Embassy delegation which arrived in the United States in 1860, right when Dilward was known to have begun performing. A young man named Tateishi Onojirō (立石斧次郎, 1843-1917) was a translator with the entourage and was affectionately known by adoring American crowds as “Tommy.” His charming exploits were covered extensively by the press and it is possible that Dilward adopted “Japanese Tommy” as a stage name to capitalize on the press while also concealing his own race.

Tommy began his career with Christy’s Minstrels, likely as a response to General Tom Thumb performing in P.T. Barnum’s show., evidenced as Dilward was occasionally billed as “The African Tom Thumb.” He would go on to perform internationally, traveling in 1866 to Liverpool with Sam Hague’s Georgia Slave Troupe and to Europe and Australia with Charles Hick’s Georgia Minstrels. In an advertisement in the Lewiston Evening Journal (Maine) on September 14, 1871, Morris Brothers’ Minstrels tout, “Also first appearance of Japanese Tommy in America in five years, he having been engaged in Europe by the Morris Bros. at the enormous salary of $200 per week in gold. Japanese Tommy will appear at each performance in his Great Specialities.” Undoubtedly, Dilward was initially employed by white minstrel troupes as a “curiosity,” however, the fact that neither his race nor his height is mentioned in later advertisements such as these is proof that his reputation as an entertainer was enough to earn him a headlining spot, and a generous salary, to boot.