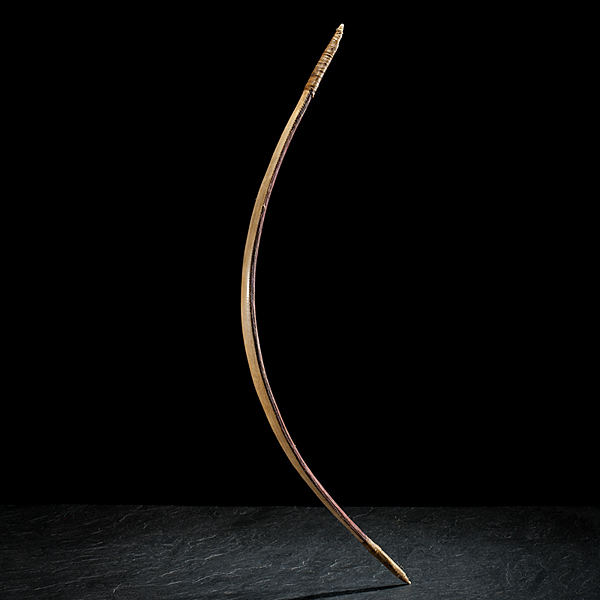 There are only a few known examples of Plateau elk antler or bighorn sheep horn bows; of those found, one is curated at the Manitoba Museum, Winnipeg and dated mid-1800s (Cat. No. H4-5-4); another is located in the British Museum within the Duke Paul Wilhelm Collection. That bow is noted as Hidatsa and made of elk antler with buffalo sinew backing, 1820-1825 (Cat. No. 5204).  Lastly an elk antler bow detailed with red wool and quillwork is in the Warnock collection (WC8808037), dated 1825-1850.  Objects from the Warnock collection were exhibited in 1995 at the Wheelwright Museum in Santa Fe.

As rare as these objects are, Meriwether Lewis and William Clark took the time to record similar antler bows in their journals when they encountered the Shoshone on their way West.

Although thus oppressed by the Minnetetarees [Hidatsa], the Shoshonees are still a very military people.  Their cold and rugged country inures them to fatigue; their long abstinence makes them support the dangers of mountain warfare, and worn down as we saw them, by want of sustenance, have a look of fierce and adventurous courage.  The Shoshonee warrior always fights on horseback; he possesses a few bad guns, which are reserved exclusively for war, but his common arms are the bow and arrow, a shield, a lance and a weapon called by the Chippeways, by whom it was formerly used, the poggamoggon.  The bow is made of cedar or pine covered on the outer side with sinews or glue.  It is about two and a half feet long, and does not differ in shape fro this used by the Sioux, Mandans and Minnetarees.

Sometimes, however, the bow is made of a single piece of the horn of an elk, covered on the back like those of wood with sinews and glue, and occasionally ornamented by a strand wrought of porcupine quills and sinews, which is wrapped round the horn near its two ends.  The bows made of the horns of the bighorn, are still more prized and are formed by cementing with glue flat pieces of the horn together, covering the back with sinews and glue, and loading the whole with an unusual quantity of ornaments (Lewis and Clark 1902: 122-123)


1902  Lewis, Meriwether and William Clark.  History of the Expedition under the Command of Captains Lewis and Clark to the Sources of the Missouri, Across the Rocky Mountains, Down the Columbia River to the Pacific in 1804-6: A Reprint of the Edition of 1814 to Which All the Members of the Expedition Contributed, Vol. II. New Amsterdam Book Company: New York.