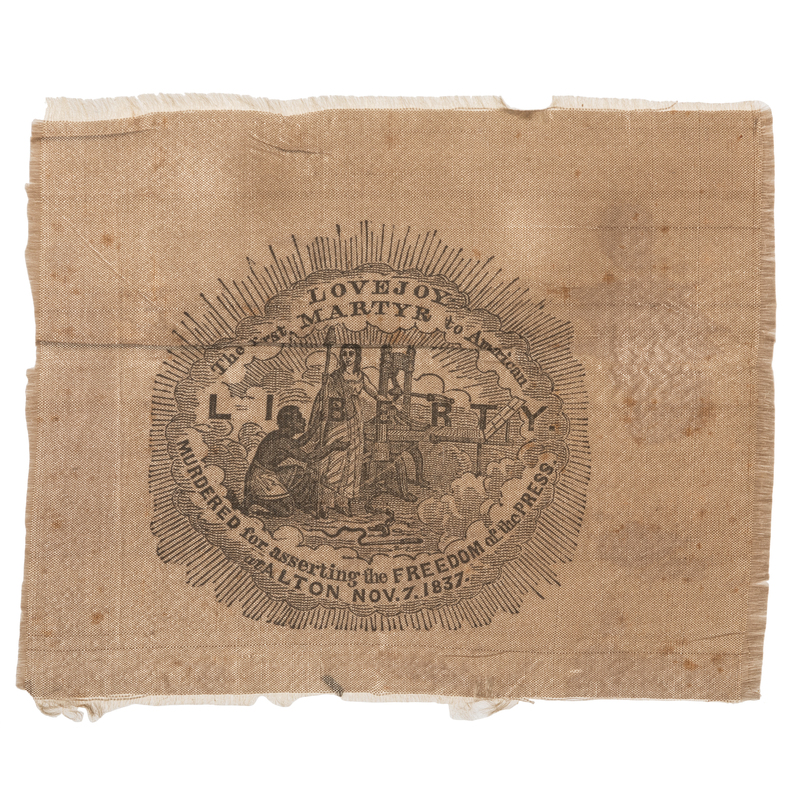 Silk ribbon, 3.5 x 4.25 in., featuring a depiction of Lady Liberty placing one hand on a printing press to her left and holding a liberty pole with the other hand. An enslaved person kneels to her right, grasping the pole and touching her dress, while a discarded whip lies on the ground before them. Text fills clouds surrounding the scene, reading, "LOVEJOY / The First MARTYR to American / LIBERTY / MURDERED for asserting the FREEDOM of the PRESS. / at ALTON NOV. 7. 1837."

Elijah Parish Lovejoy (1802-1837) was born in Maine and received his education there, attending what is today Colby College. After his graduation he determined to move to Illinois, and after a brief stint at selling newspapers in Boston, moved to St. Louis in 1827. Even at this early date, St. Louis was at the nexus of the question of slavery, and it was here that Lovejoy made acquaintances with a number of Missouri abolitionists.

In 1832 Lovejoy returned east to study at the Princeton Theological Seminary, and in the spring of 1833 was ordained a minister in the Presybterian church.  In that same year he returned to St. Louis to edit the St. Louis Observer. By 1834, editorials critiquing the Catholic Church, liquor, tobacco and slavery began to regularly appear in the paper.  His abolitionist sentiments particularly inflamed supporters of slavery and his printing press was destroyed on three different occasions.

In 1837 Lovejoy made the decision to  move his press across the Mississippi to Illinois, a free state. As news of his plans spread, his office once again became a target, and his office and press was vandalized even before it could be packed.

Lovejoy found no friends in Alton.  Although located in Illinois, a free state, it was a pro-slavery town, and Lovejoy's call for the formation of a state-wide Anti-Slavery Society only inflamed the forces opposing abolition. Things came to a head in November, 1837 when pro-slavery forces attacked a warehouse where Lovejoy had hidden his press.  In the ensuing melee, the warehouse was set afire and Lovejoy was killed by a shotgun blast.  After murdering Lovejoy, the mob broke up the press and threw its pieces into the Mississippi River.

Lovejoy's murder was the touch point for many abolitionists.  John Brown, inflamed by the murder declared in a famous sermon "Here before God, in the presence of these witnesses, from this time, I consecrate myself to the destruction of slavery."

We know of no other existing example of this rare memorial ribbon.