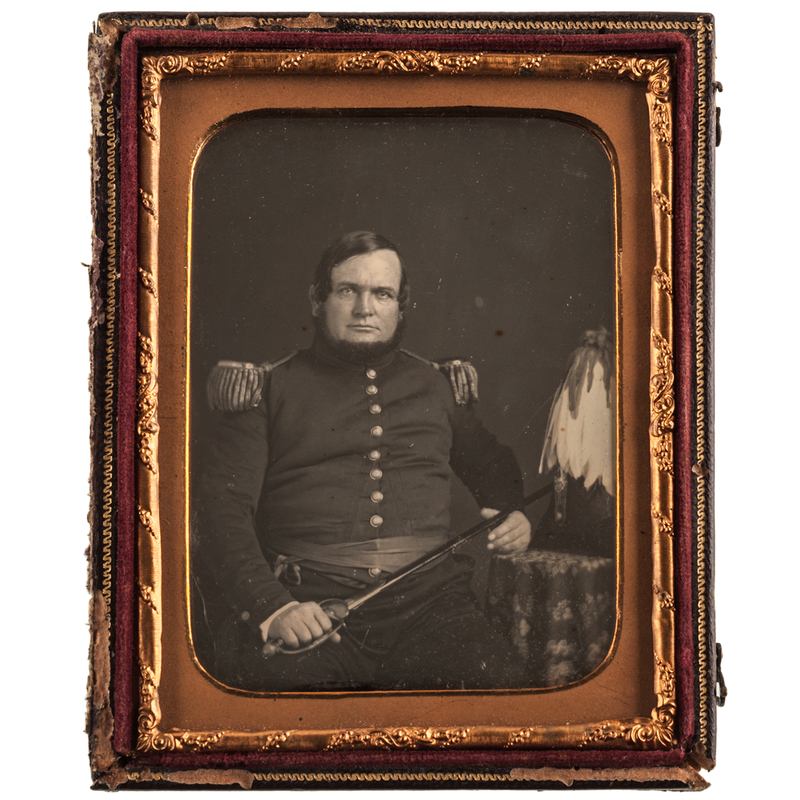 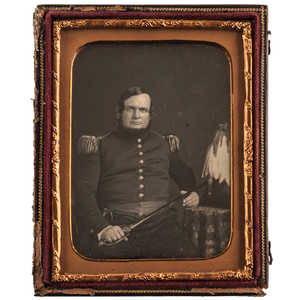 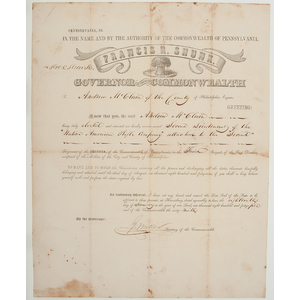 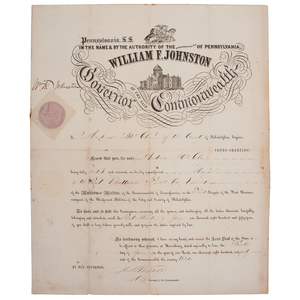 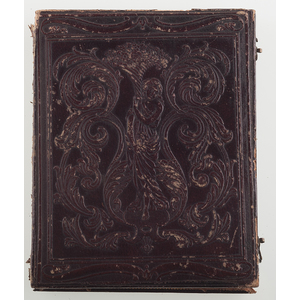 Lot of 3, featuring quarter plate daguerreotype of a bearded officer, sword in hand, his shako with feather plume resting on the table beside him, with inked note identifying the subject as Col. Andrew McLean (variation of proper spelling "McClain"), housed in full case. Previous owner's notes indicate that plate is stamped L.B. Binsse & Co., NY, which made plates ca 1843-1845.

At 10 am, Sunday morning, July 7, 1839, panicked Philadelphians heard the boom of cannon fire outside St. Phillip Nerri’s church instead of the serene ringing of church bells. For two long days, the city transformed into a war zone after a group of American nativists (associated with the Whig party) began to riot. The angry mob prepared to storm the church to free Charles Naylor, a political prisoner being held by the state militia.

“The excitement was awful, men running about hunting their relations, women in search of their children, I myself threw my children hastily into the entry…dead bodies were falling around me, and the excitement lasted till 9 o’clock at night,” said John Graves (Philadelphia Public Ledger, “The Trial of Andrew McClain," November 16, 1844, 1).

Native-born Americans and Irish-American Protestants felt threatened by the influx of Irish-Catholic immigrants. Overcome by rage from a perceived threat to reading the King James Bible in the public schools, many became violent and burned two Catholic churches that May (http://philadelphiaencyclopedia.org/archive/nativist-riots-of-1844/). Preparing for the worst, St. Phillip Nerri’s armed itself against an anticipated attack after a 4th of July parade. The siege did not occur on Independence Day. The next day; however, a hoard of men assembled outside the church when they heard it equipped itself. Militia men and local police organized to protect the city.

In the crowd was American nativist leader, Andrew McClain. “I saw McClain when the battering ram was used to break into the church,” said Francis S. Johnson (Philadelphia Public Ledger, “Southwark Riot Cases, Court of Oyer and Terminer Before Judges Kind and Parsons. Trial of Andre McClain,” November 11, 1844). McClain was born in Lancaster, PA in 1803. He was a prize fighter for some time, slugging it out with Jim Reed 54 rounds at Bell’s tavern in 1832. “[He is] a whig bully—who makes his living by ring fighting…It seems now he has turned traitor, murderer, ricter, and church burner,” raged the Illinois State Register (“More Whigs Arrested for Treason and Murder”, August 13, 1844). Riots surged across the country in the 1830s, but very few lasted for more than a day. The 1844 riots in Philadelphia, known as the Southwark riots, were much more severe. It resulted in the death of twelve people, citizens and soldiers, and 50 wounded. A few weeks later, on July 18, 1844, McClain surrendered himself to the mayor. Outraged, the Mayor ordered that he be “committed as an accessory to murder of Sergeant Guyer and corporal Troutman,” two militia officers killed while protecting the church (“More Whigs Arrested for Treason and Murder”, August 13, 1844). As much as the papers demonized him earlier, witnesses testified that McClain had a much different role in the riots than believed.

“I saw McClain urging people to go away [from the cannons],” said John Graves, a member of a sheriff’s posse. “His conduct at the time was as that of every other peaceable person on the ground; to preserve the peace and protect property…I saw [him] endeavoring to prevent the mob from bursting in the doors of the church, and gaining an entrance…[he] was engaged with myself and others in preventing the use of the battering-ram against the door” (“More Whigs Arrested for Treason and Murder”, August 13, 1844).

“[I] saw McClain in the organ gallery,” reported David Ford, another member of the posse. “Two young men, who removed the table from the front organ; they said they were going to play upon the organ; others came to their assistance and I beckoned to Mr. McClain and others who came and assisted me to keep the boys [from destroying it]; McClain said to them ‘If anyone enters here, they do it over my dead body’” (“More Whigs Arrested for Treason and Murder”, August 13, 1844)! McClain also interceded a group of men determined to beat Judge James Campbell, a well-known Catholic in the area (The Journal of the American Irish Historical Society, Vol. 10, p. 208).

A large crowd gathered to watch the proceedings of his trail. The jury deliberated for 50 hours until reaching the unanimous decision that McClain was not guilty. The “Court house shook with pearls of applause,” and a procession formed to take the hero home (Boston Courier; November 21, 1844). The next month, on January 18, 1845, Governor Francis R. Shunk appointed him a 2nd lieutenant of the Native American Rifle Company attached to the 2nd Regiment, 3rd Brigade, 1st Division of the Philadelphia Militia. He served in that position until Governor Johnston promoted him to major of the 1st Battalion, Philadelphia Company Volunteers in June 1849, but demoted him to lieutenant colonel that February.

Few spots on plate, some light scratches including few along bottom edge of plate, plus a scratch that extends through feathers in hat. Not removed from seals, which consist of scotch tape. Housed in full case completely separated at hinge. Horizontal and vertical folds in each document.