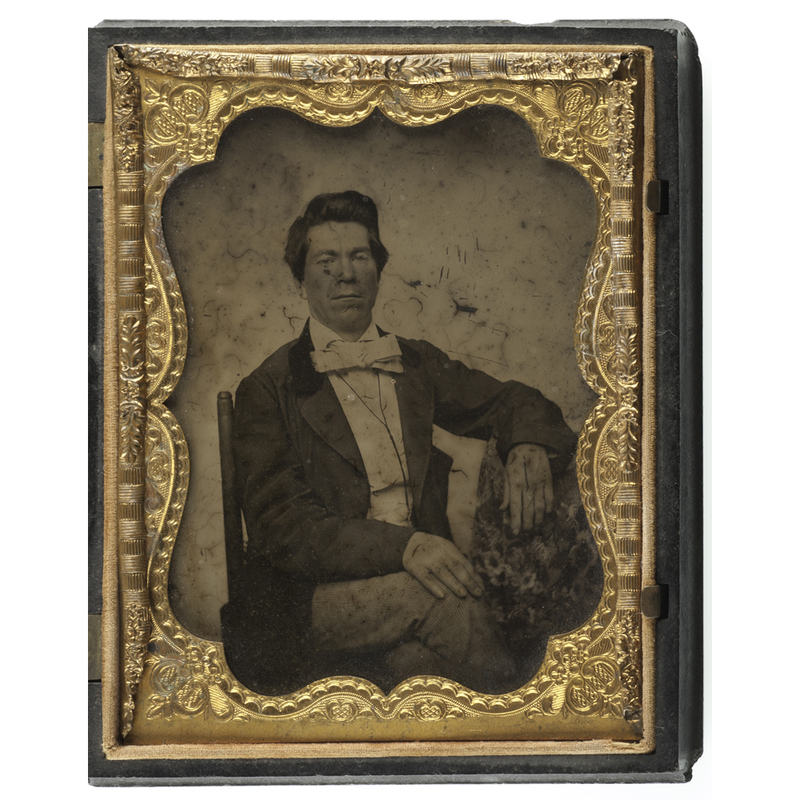 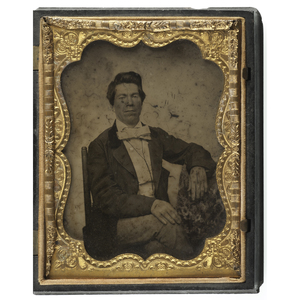 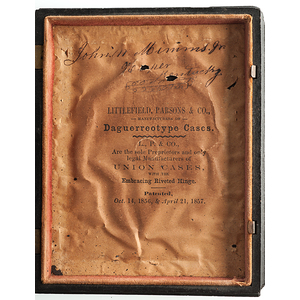 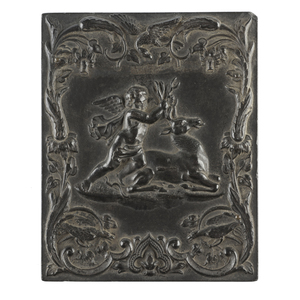 Quarter plate ambrotype of gentleman identified inside case as "John W. Mimms Jr. H __per, Kentucky," possibly brother to Zerelda James, wife to the infamous Jesse James. However, because no other images of John W. Mimms Jr. are known to exist, this identification cannot be confirmed. Housed in period, Littlefield, Parsons, & Co. Union case.

Research indicates that Zerelda had a brother named John W. Mimms (born in 1831), and he would have been a "Junior," so it is certainly possible that this is her brother and Jesse James' first cousin and brother-in-law. In an article discussing the image offered here, James Family researcher Eric James concludes that the location in Kentucky that is only partially decipherable in the inscription is likely the town of Hesper, KY. He also notes a letter in which the reference to Hesper is found from Lutie Mimms to Joan Malley-Beamis. Lutie identifies J. W. Mimms Jr. as a “merchant in Hesper, Ky.” Lutie is the granddaughter of John Wilson Mimms Sr. and Mary James-Mimms. Joan Beamis is a great-granddaughter of Drury Woodson James, an uncle of Frank and Jesse James. Refer to Eric James' article on the website "Stray Leaves" for more detailed research and analysis of the ambrotype: http://ericjames.org/wordpress/2016/01/16/john-w-mimms-jr-daguerreotype-now-market/.
The consignor relays the following about how the ambrotype came into his possession: "I was in Martha’s Vineyard this summer (where the Presidents hang out for vacation) and Island off Cape Cod…..and I am an ex~photographer and picker….I was at a flea market that I normally visit and saw this at an Antique vendors table…I bought it as he seemed to realize it had some connection but said he had if for a few years and wanted to sell it as he dealt in high-end jewelry…..he said he got it in Miami where he summers…..that’s the origin as far as I’m concerned…"
An interesting discovery worthy of further research.

Flaking of the lacquer and toning of the image. Some damage to the copper mat.