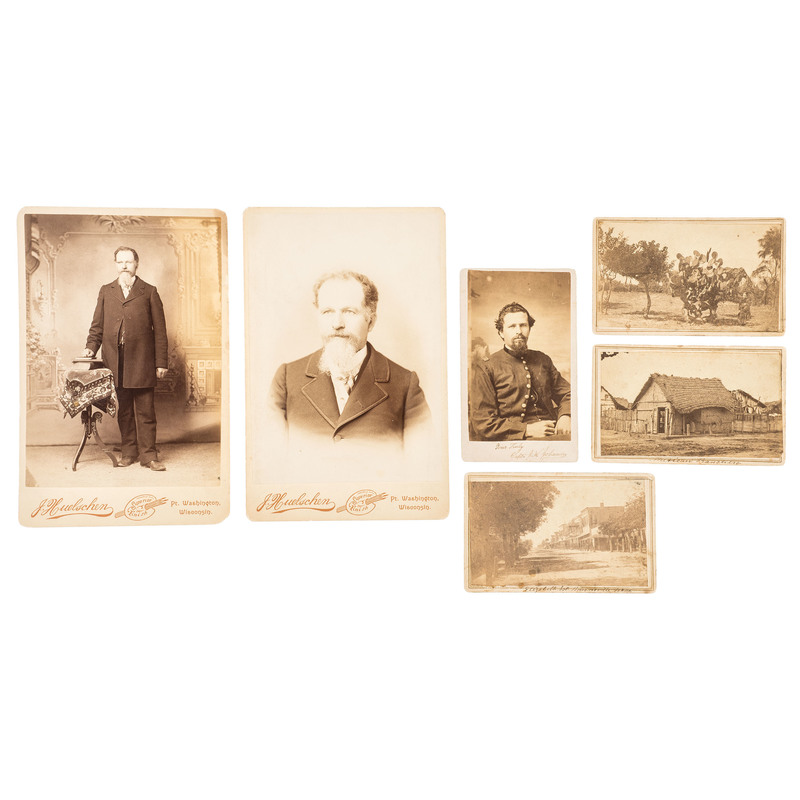 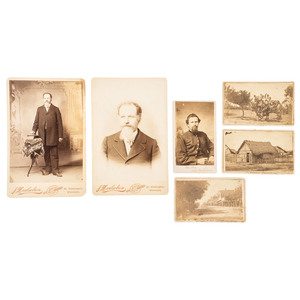 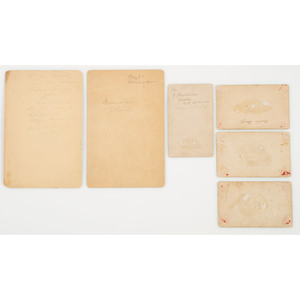 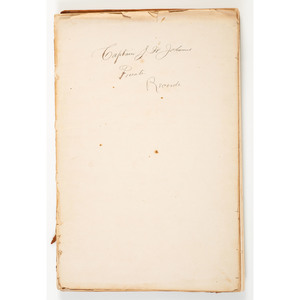 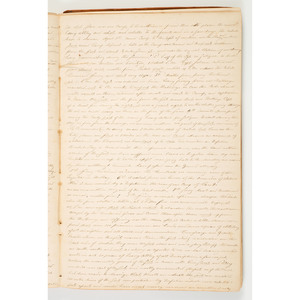 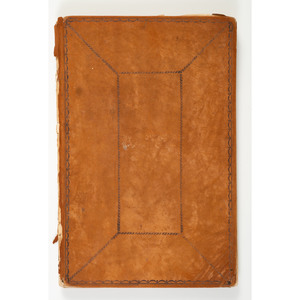 Lot of 7, including 6 photographs and 1 record book measuring 10 x 16 in. with 25pp of Civil War recollections.

As a young child, John W. Johanns (1837-1895) immigrated to the United States from Bavaria in modern-day Germany. His family settled in Wisconsin, and it was here that he enlisted on 2/10/1864 as a 1st Lieutenant with Co. F, Wisconsin 35th Infantry. Johanns would be promoted to the rank of captain on 1/14/1865. After serving the entirety of his enlistment with the Department of the Gulf, he mustered out at Brownsville, Texas, on 3/15/1866. Following the war, Johanns would return home to become a successful merchant, businessman, and serve as postmaster for the community of Cedarburg, Wisconsin.

A bold script on the opening page of the book reads "Captain J.W. Johanns / Private Records."  Though portions of the ensuing text describe war-time activities in the present tense, the manuscript offered here was likely penned in the immediate years after the war. WorldCat identifies a photocopied 143pp diary entitled "A Civil War Diary of Captain John W. Johann, Commander Company F, 35th Regiment Wisconsin Volunteers" which may represent the actual war-date diary of Johanns. Nonetheless, this handwritten account contains enlightening descriptions of Johanns' service which are highlighted by the WI 35th's role in the Mobile Campaign and the Siege of Mobile. [Note that while the soldier at times identifies himself with the last name "Johanns" it appears that later generations permanently dropped the "s."]

Johanns, who typically refers to himself in the 3rd person, opens with the formation of the regiment in 1863 and 1864. He describes skirmishes and encounters with the enemy in fall of 1864. He writes in much greater detail about the regiment's activities after landing at Mobile point in February 1865 up to and through the surrender of Confederate forces at Mobile on April 12, 1865. Typical of his prose are these entries from April 3 and 4, 1865: "...Weather fine, firing continuous at 5PM the regt was ordered in line heavy firing from our Batterys marched out to the works to support the Battery in case the rebs should make assault on them, returned after dusk and went to camp, an explosion to[ok] place in the fort, and the fire from the fort seased but our Battery kept up a brisk fire during the night, it was a grand sight to see the shells going through the air....[4th April] We are due east of Mobile but can see the city plane our fleet is three miles in the rear and cannot advance on account of obstacles in the Channel, we have lost up to date 2 monitors on torpetoes the whole bay is covered with this infernal machines...."

The record book is accompanied by a CDV of Johanns in military uniform below which appears the inscription "Your [sic] Truly / Capt. J. W. Johanns." Verso is inscribed "To R Hastreiter / Musician / Co F 35 Wis Vols." Robert Hastreiter of Madison, Wisconsin, was a musician with service in the WI 20th as well as WI 35th. Three additional CDVs were likely acquired by Johanns while in Brownsville, Texas. These CDVs depict scenes identified respectively as a "Mexican Ranchero," "Elizabeth St. Brownsville Texas," and "Cactus Plantz." Two cabinet cards, ca late 1800s, from a studio in Pt. Washington, Wisconsin, feature portraits of an older Johanns.

Front and back covers of book completely separated from spine. Loose binding at front of book resulting in  some detached pages. Expected toning especially along edge lines with very scattered foxing.