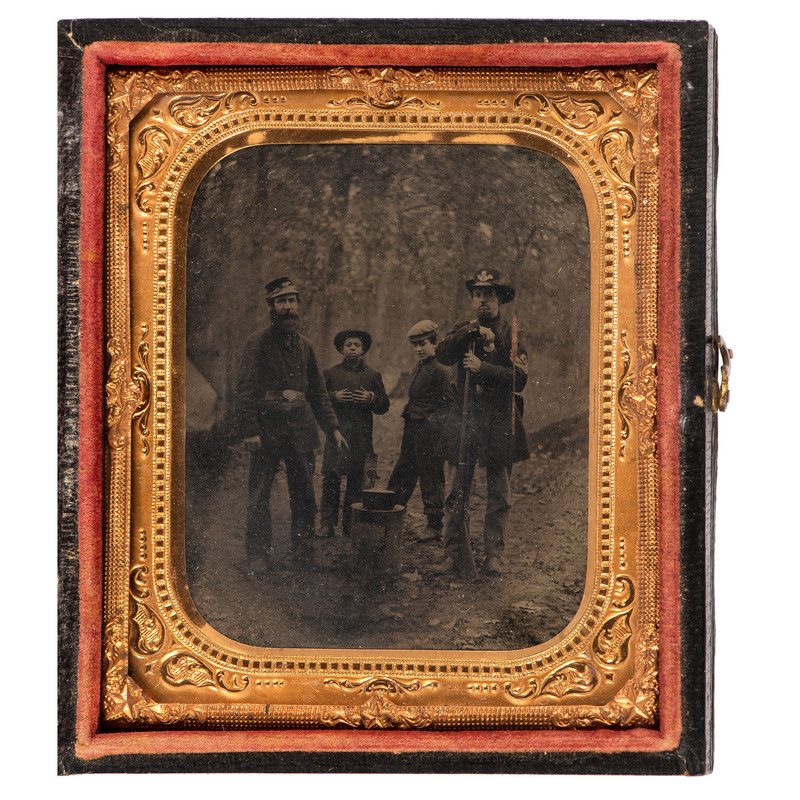 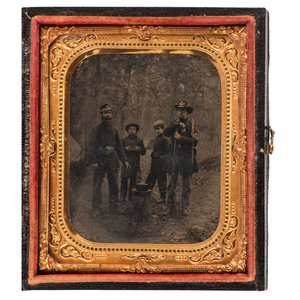 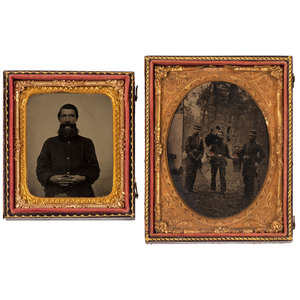 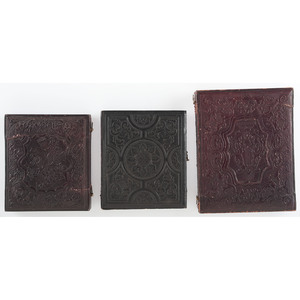 Lot of 3 images housed in full pressed paper cases, including:

Quarter plate outdoor tintype showing Robbins at camp near Harpers Ferry, in the fall of 1862. Robbins stands between two officers, including 1st Lieutenant William B. Bacon at left, holding a bowl full of red-tinted apples in each hand. Young African American and white boys stand in the background. Although unidentified, the young subjects may have served as Robbins' cooking assistants. (Soft clarity, loss to emulsion).

Sixth plate outdoor tintype showing Robbins pointing to his pot sitting on a stump, while an unknown officer and young African American and white boys stand by. (Sharp, strong clarity).

Chandler Robbins (1819-1880), a wheelwright in Westborough, MA enlisted as a private on July 16, 1861 into Company K of the 13th Massachusetts Infantry. The regiment was heavily engaged at 2nd Bull Run (209 casualties), the 'Bloody Cornfield' at Antietam (136 casualties), and the day one of fighting at Gettysburg that gutted the 1st Corps precipitating a general retreat verging on a route (195 casualties).

The images captured outside, with Robbins gesturing to his cooking equipment, corroborates information accompanying the items which state that Robbins served as the company cook. Though Stearns also lists him as a hospital steward, as a private he could have certainly served in multiple capacities during his 3-year enlistment.

Research suggests that Robbin's "was captured three times." Although this is unconfirmed, it is entirely possible given that a large percentage of the regimental casualties at 2nd Bull Run and Gettysburg were prisoners. It has also been suggested that he served at Libby Prison. There is no confirmed record of Robbins at Libby, but again, entirely probable. The regiment also saw considerable action at Spotsylvania in May 1864 where a few more 13th men were captured. Records show that Robbins was mustered out on August 1, 1864 in Boston. He returned to Westborough after the war where he took up a variety of occupations, listed both as a merchant and an undertaker, joined the Masons in 1873, and died of "a carcinoma" on April 11, 1880.