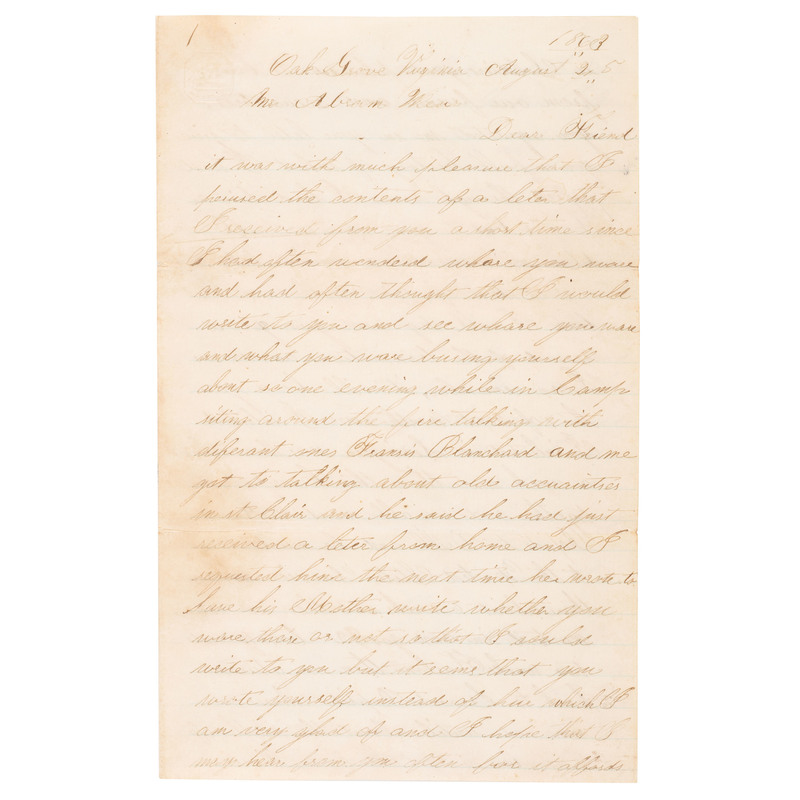 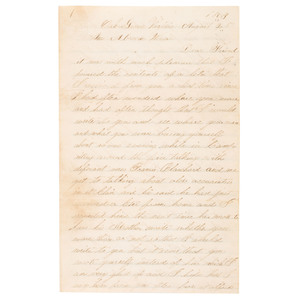 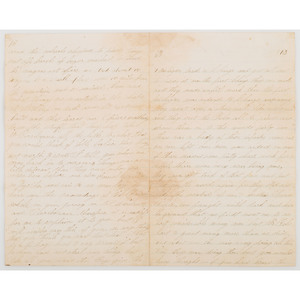 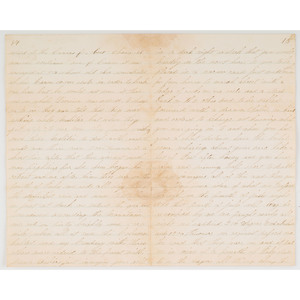 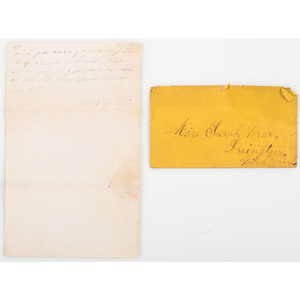 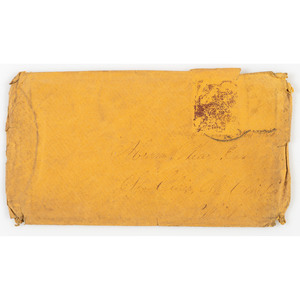 Though this letter is written the day after Rice's most recent engagement, a skirmish at King George Court House, VA, its focus instead is a vivid account of Gettysburg and its aftermath. Private Allen Rice enlisted on 9/6/1862 then mustered into "C" Co. 6th Michigan Cavalry on 10/11/1862. Part of the famous "Michigan Brigade", the 6th Cavalry served under Brigadier General George Armstrong Custer participating in the Gettysburg Campaign and then a steady string of engagements until the close of the war. Rice mustered out on 11/24/1865 at Fort Leavenworth, KS.

Rice's letter is addressed to his friend Mr. Abram Wear. The 1860 US Federal Census lists Wear as a 59 year old English immigrant who worked as a dyer at a woolen manufacturer in St. Clair, MI. The 1860 census also lists Allen Price as a carder at the same manufacturer. With its detailed accounting of the 6th's movements up to and including the Gettysburg Campaign, Rice's letter is a response to Wear's request for "a full history of what I had passed through since I had bin a soldier."

After four pages describing enlistment, winter quarters, raids, and picket duty, Price pens approximately ten pages describing the 6th Cavalry's ride towards Gettysburg and the critical battles of June 30 - July 3rd. He references the June 30 Battle of Hanover (Price did not participate as he was detailed to forage duty for the regiment) and his ride to return to his regiment, where "the road was strewn with clothing of all description and once in a while a dead Reb." The letter then turns to the July 2nd Battle of Hunterstown (referred to by Price as "Huntstown"). Price describes fierce combat after his company was ordered to dismount and fight on foot as well as the hazards of friendly fire: "...it was a great wonder that we was not all killed for the Rebles were firing on us from one direction and our men from the other and I tell you the shots came in on us like hale stones...." After traveling all night, the 6th "got to our place of destination on the right of Getisburg...about one oclock [on July 3rd] it was discovered that they ware trying to come round on our right so we ware ordered to our horses and went round to the right on a road. The battery was planted and the fun commensed." He goes on to recall the charges of the 7th MI and 1st MI, the distaste of the Rebels for "the contents of our 9 shot Spenser rifles," "the continual roar of canon," Pickett's Charge, and the Confederate retreat. Rice paints a vivid picture of the regiment's July 4 engagement at Monterey Pass: "Just imagine your self on a dark night, so dark that you could hardly see the next horse to you, to be placed in a narrow road just wide enough for four horses to march abreast with a ledge of rocks on one side and a steap bank on the other and to be called forward with a drawn sabir in hand and ordered to charge...."

Price's letter concludes with a brief reference to later battles, a description of General Judson Kilpatrick, and accounts of Confederate soldiers who have surrendered to his regiment.  With its exceptional length and detailed descriptions of battle, this letter offers a rare, personal glimpse into the 6th Michigan Cavalry and the Gettysburg Campaign.

Good condition given age. Expected toning throughout and minor loss along center fold line. Appears to have some type of dampstaining or soil throughout top center and near mid-sections of letter, however, all contents remain legible.