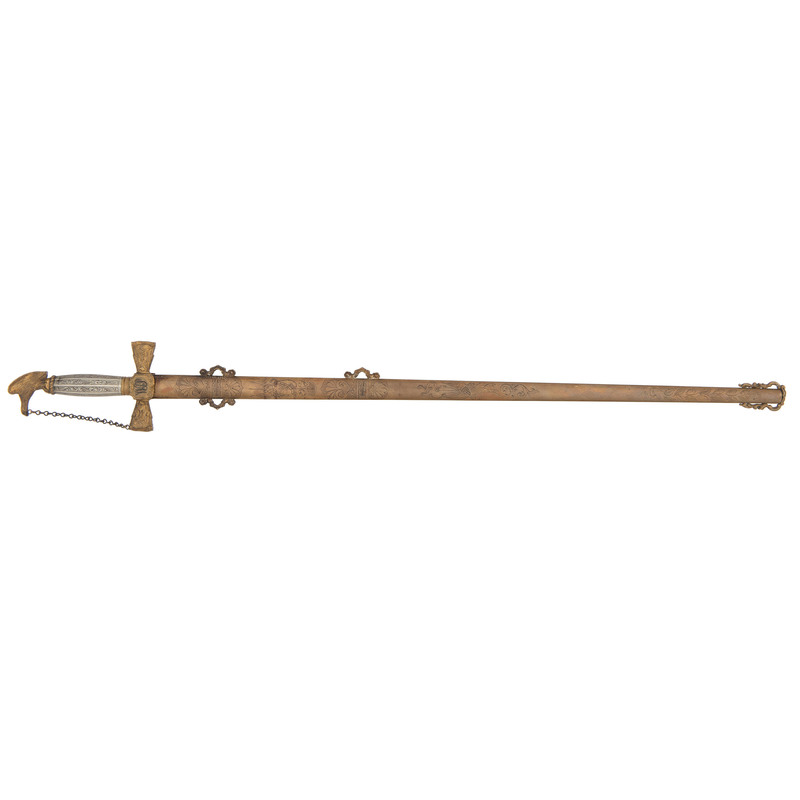 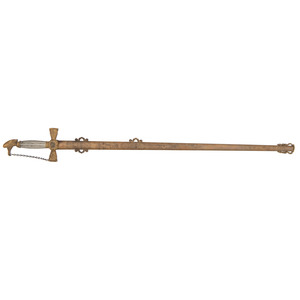 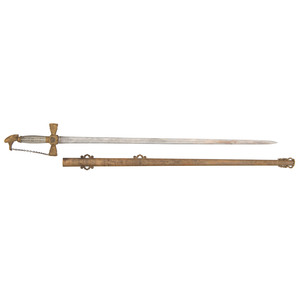 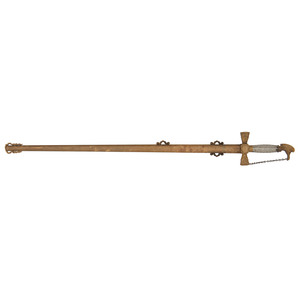 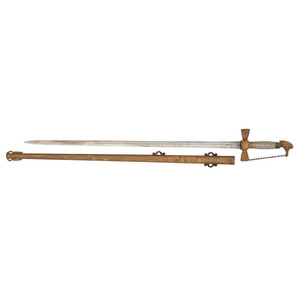 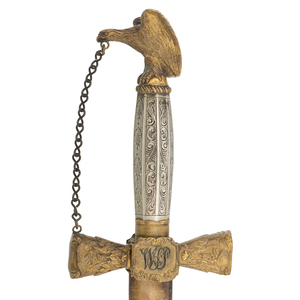 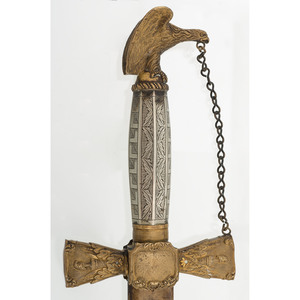 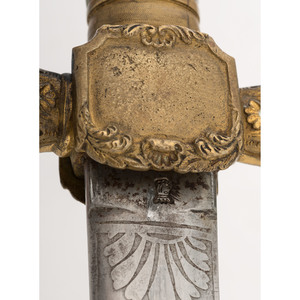 A fancy grade presentation quality sword, owned by General William S. Pierson (1815-1879), Commander of Johnson's Island Prison Camp. Accompanied by a "true copy" of a letter from Lieutenant Colonel William Hoffman, 8th Infantry and Commissary General of Prisoners, 1p, 7.5 x 9.5 in., on Office of Commissary General of Prisoners letterhead, Columbus, OH. December 17, 1861. A letter addressed to Ohio Governor William Dennison, in which Hoffman requests that Pierson be appointed commander of the guard for the "Depot of Prisoners of War at Sandusky, Ohio." Matted and framed, 13.5 x 15.5 in.

From the Mexican War era, this sword has a double-edged 31 in. acid etched blade with patriotic symbols, scrollwork, and "W.H. Horstmann/ & Sons/ Philadelphia." Ricasso with crowned head in profile stamp, a Solingen mark. The hilt is in gilt brass and coin silver with coin hexagonal grip with floral and geometric engraving. The pommel is 2.5 in. high full-bodied eagle standing on a dome with gadrooned border. The counterguard, also in gilt brass, is cross shaped, with cast relief Liberty Cap, weapons, and acanthus leaf design on left side and spread-winged eagle atop pike with Liberty Cap, other edged weapons, and acanthus leaves. In the center of the cross guard, a square box is engraved with monograms, "WSP." A brass chain knuckle guard attached to the underside of eagle's beak. Overall length is 38.5 in. The scabbard is brass with cast scrollwork carrying mounts and drag. One face has nice scrollwork engraving and martial symbols with US shield. Gilt is worn, else excellent.

Pierson, originally a Connecticut native, emigrated to the Firelands of northern Ohio, and at the outbreak of hostilities enlisted as a major in Hoffman's Battalion of the 128th Ohio Volunteers. His rise in the 128th was rapid; he was commissioned colonel, and charged with organizing and overseeing construction of Johnson's Island prison camp located in Sandusky Bay of Lake Erie, just offshore from present-day Toledo, OH. Built on a 300-acre island, the camp was initially built to hold 1000 men; by war's end its population had swelled to more than 3000, including seven Confederate generals.

Provenance: Sword was purchased from a direct descendant of Pierson; formerly part of the Elmer Grimm collection; previously sold in these rooms, November 15 & 16, Historic Americana Auction, Lot 688; consigned by a private collector.