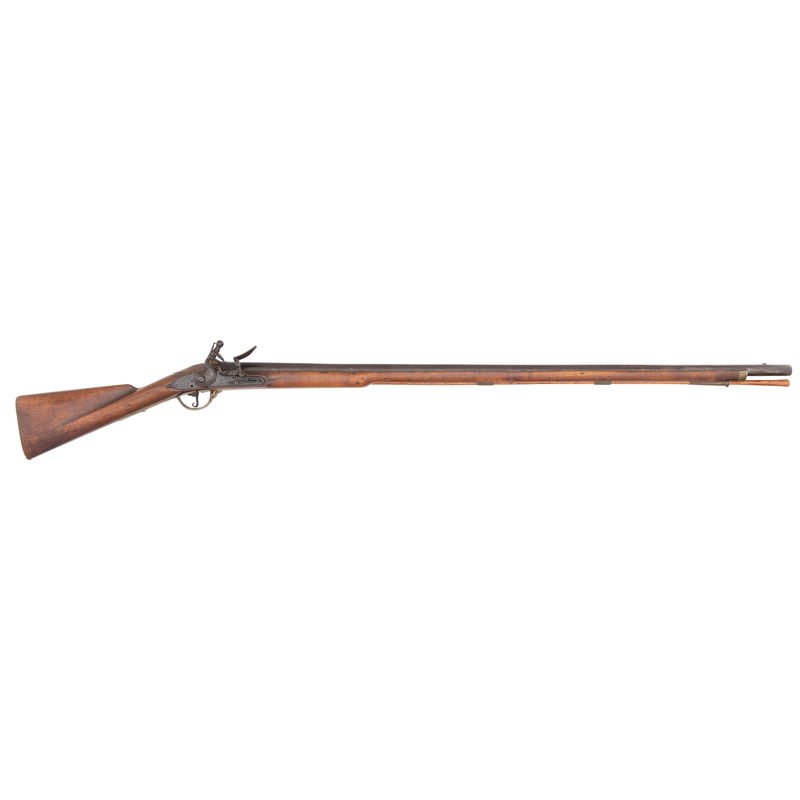 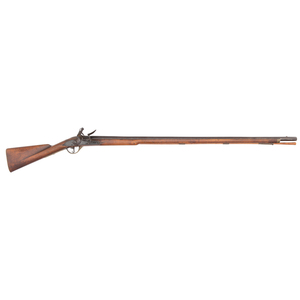 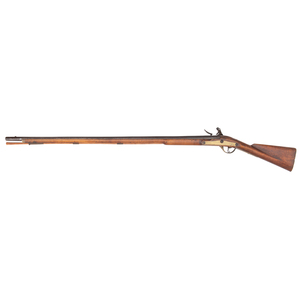 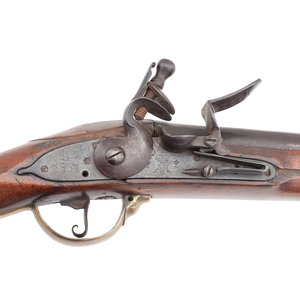 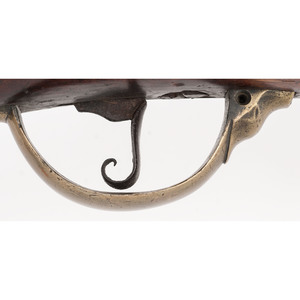 .85 caliber, 45" pin-retained round barrel with tang screw entering from underneath the stock, 60.5" in overall length, no S/N. Bright finish, brass mountings, walnut stock. The 7.3125" long flat lock has a prominent teat at rear and is drilled for a dog which is not present. It is marked horizontally behind the hammer in three lines: R / KIPLING / 8. Forward of the hammer are a pair of Board of Ordnance {crown} / {broad arrow} marks, along with the cypher of Queen Anne. The interior of the lockplate is marked with a {crown} / 3 inspection and maker's initials that appear to read TM. The rounded and fenced iron pan is bridled and the rounded steel is engraved H-22 on its face. The lock is fit with a rounded, swan-neck cock. The flat brass, 3-screw side plate is 7" in length. The flat brass buttplate is without a tang and is retained by six small, square head finishing nails. The wooden ramrod has a small brass disc pinned to its face and is retained by three sheet brass pipes, without an entry pipe in the stock. The stock measures 56.75", leaving 3.5" of the muzzle extending past the stock tip, with a bayonet lug  located on top of the barrel 1.875" from the muzzle. The stock tip has been reinforced with a .625" sheet brass band to prevent splitting. The stock has a pronounced swell at the ramrod entry point to the stock, a raised carved apron around the tang and a well defined comb to the stock.

This is an interesting and early, pre-Ordnance pattern British military musket, the gun conforms most closely to what DeWitt Bailey refers to as the Pattern 1704 Sea Service Musket. The single digit "8" on the lock indicates production in 1708. The contractor Richard Kipling worked in London circa 1701-1715 filling Ordnance Department contracts, delivering completed arms as late as 1711, as well as a 1707 contract for locks, and later working as a stocker and setter up until March of 1715 (Bailey). The Pattern 1704 Sea Service Musket was based upon the Pattern 1703 Land Service Musket. It was produced with a 45"-46" barrel stocked to near the muzzle, with a flat lock with a dog catch and a flat, nailed brass buttplate. Over time, as the socket bayonet was adopted for general use, these earliest pattern muskets were modified by cutting the stocks back roughly 4", applying a brass reinforcement band and adding a bayonet stud on the top of the barrel. Locks were also modified by the removal of the dog catch as they fell out of use. It is the opinion of this cataloger that this stock is a period of use replacement, as the defined comb is not typical of guns from the era of manufacture, but appears more typical of Ordnance Pattern arms ca 1740, when a defined comb and lock and stock flats without carved moldings were in fashion. The cock, pan and steel are all replacements, not original to the 1708 lock. Their form is more appropriate for Ordnance Pattern 1740 locks. It is not clear if the musket is a re-conversion to flint, or was simply repaired at some point during the period of use. The touchhole appears to be bushed, and some erosive pitting is present around the touchhole and at the breech, suggesting the gun may have spent some time in percussion. Despite this potential re-conversion, the musket is a very attractive and fine displaying example of an early production British military long arm from the pre-Ordnance pattern period that was upgraded and repaired to remain in service with the Navy well after these patterns were no longer in use with the British Army. An interesting dichotomy, indicating that small arms were not a priority to the "Senior Service," with the navy only being concerned that they were functional weapons and not necessarily of the latest pattern.

Very good overall. Barrel with an oxidized brown patina over most of the surfaces, which were cleaned and polished long ago leaving only a trace of the proof marks at the breech. The lock has a similar oxidized patina, with a mottled brownish-gray color and mostly clear markings. Lock is mechanically functional, bore is fair. It is heavily oxidized and moderately pitted for its entire length. The barrel has probably been shorted slightly, likely about .5", and the muzzle is somewhat jagged and slightly out of round. The brass triggerguard may be a replacement from the period of the restocking, it is drilled for a sling swivel and it appears that the forward finial has been broken off. The stock is in near fine condition with the usual bumps, dings and mars from service and use. There is a long diagonal crack on the reverse of the forend running about 19" from the nose band into the ramrod channel, as well as shorter 4" diagonal crack in the center of the forend and a 3" crack near the nose band, on the obverse. There is a moderate chip of wood missing forward of the lock mortise, as well as a small crack under it. A nominally .45" round impact mark on the obverse forend that is about .25" deep.