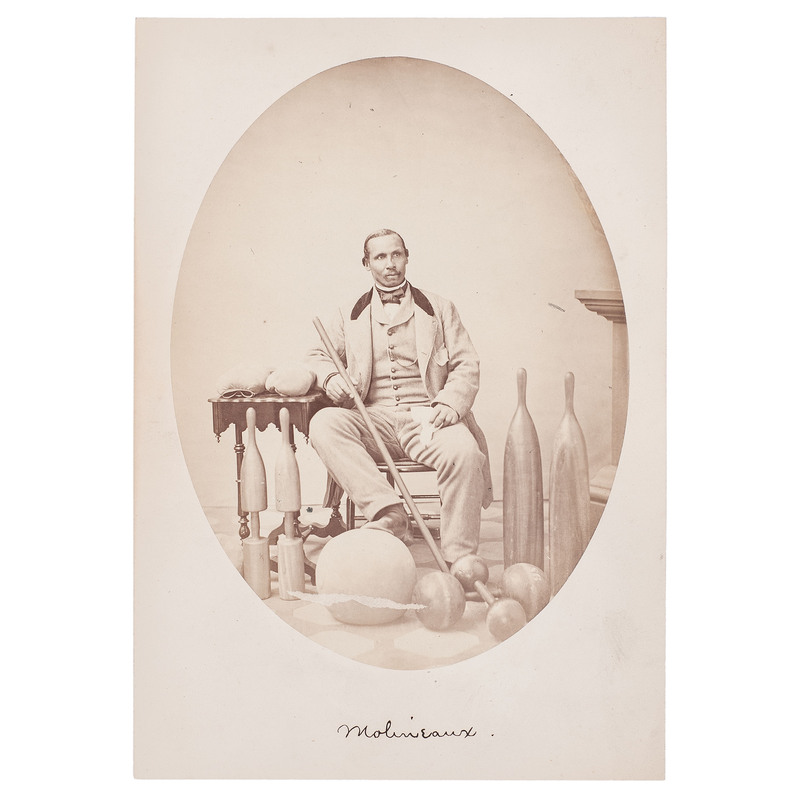 A truly fascinating subject, Aaron Molyneaux Hewlett (1820-1871) served as the curator of Harvard College's gymnasium from 1859 until his death in 1871, making him the first African American faculty member at Harvard and the first college-level African American superintendent of physical education in the United States. Prior to his employment at Harvard, Hewlett was successful (and famous) in his own right as a boxer in Brooklyn. He was known as one of the best boxers in the town, and even operated his own sparring academy, Molineaux House, out of his home starting in 1854.

The 1850s saw a heightened interest in physical fitness, especially among white middle and upper-class city-dwellers, who feared becoming weak due to their increasingly sedentary lifestyles. Harvard students thus began asking for a gymnasium close to campus, and in 1860 Rogers Gymnasium was built. Hewlett, known for his athletic prowess, was then hired to run the gym and coach various sports teams. Newspapers soon touted his success, including one Boston paper, which claimed that athletics had "come almost to rank with Mathematics" at Harvard.

Hewlett had almost as interesting a personal life as a professional one. He married gymnast Virginia Josephine Lewis, and with her had five children, including a daughter, Virginia, who married Frederick Douglass, Jr. and a son, Emanuel, who became the first African American graduate of Boston University School of Law.

Hewlett's enduring legacy of success as an African American man in a 19th-century American society is perhaps best summed up by Frederick Douglass: "Few of our race are appointed to honorable positions, and the few who do receive recognition of their qualifications are usually soon set upon by combinations of prejudiced men and gradually drawn into traps set for their destruction…Many attempts have been made by jealous persons to entrap him…but because Hewlett was a respectable gentleman and excellent instructor, he remained at Harvard."

Photograph with approx. 2 in. lg. abrasion with loss to lower portion (partially obscuring medicine ball), stray pencil/ink marks throughout, and light toning. Mount with a bit of darkening to edges and light surface soil throughout. Verso with various pencil inscriptions in upper right corner.