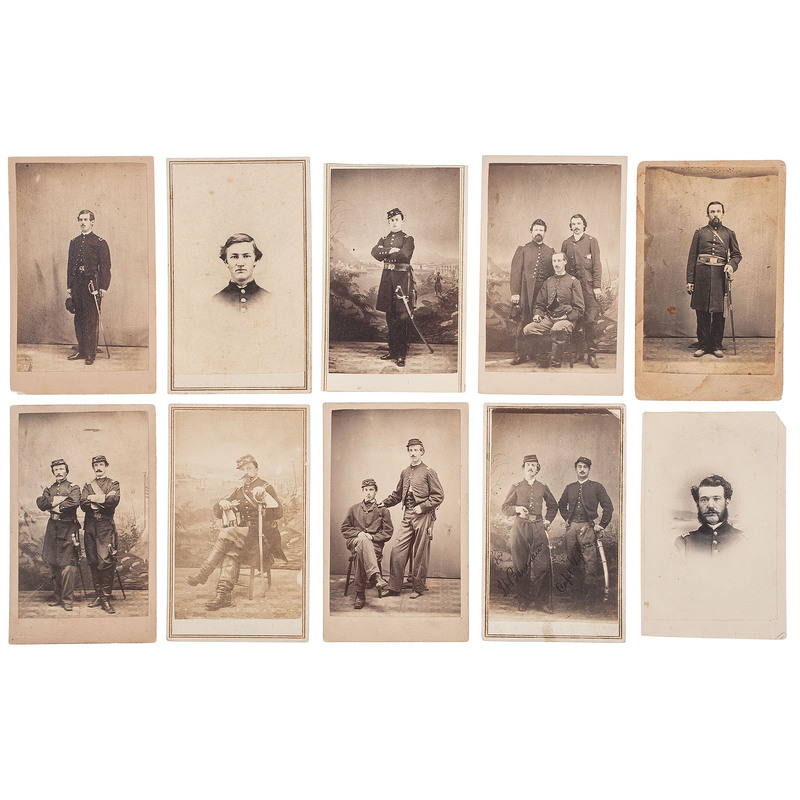 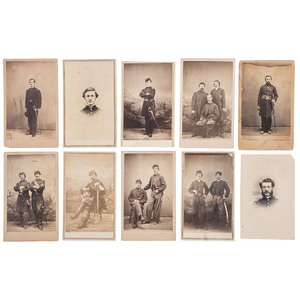 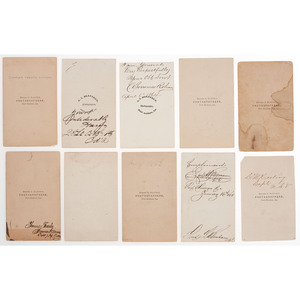 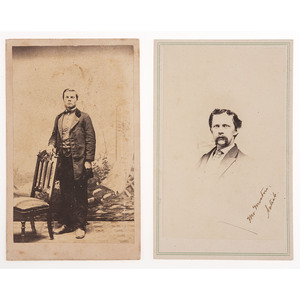 Lot of 12 CDVs, including ten studio portraits of Union soldiers, some identified members of the 82nd US Colored Infantry, many posed with their swords. Brooks & Blauvelt: Port Hudson, LA, 1863-1864. Although two lack a studio imprint, the painted backdrop in each indicates the portraits were taken by the Port Hudson photographers. With two civilian portraits, one a full-standing portrait of an unidentified young man, the other, a vignetted view of a mustached man ink signed at lower right, "Mr. Mouton / Artist," verso imprint of A.I. Blauvelt.

Subjects include: Charles Keeting, enlisted as private with Co. H, 13th Massachusetts Infantry, 6/1861, commissioned captain, 3/1863, and brevetted lieutenant colonel, 3/1865, possibly autographed on verso; Charles Francis Luther, enlisted as private with, Co. C, 22nd Massachusetts Infantry, 10/1861, commissioned 2nd lieutenant, Co. K, 82nd USCT 1/1864; two officers from the 82nd USCT proudly standing together, each identified in ink on recto, vertically along their image, including Lieutenant August Bauman, enlisted 9/1863, Cos. E and I, and Captain Eugene Ghyka, enlisted 9/1863, Co. I. Both Bauman and Ghyka's names appear on the African American Civil War Memorial. Boldly signed on verso by Bauman, Co. E, from Port Hudson, LA, January 16, 1864, and dedicated to Lieutenant L.W. Benham; standing view of Charles B. Rohan, enlisted as 2nd lieutenant, Co. A, 84th USCT, autographed on verso and dated April 6, 1864; two officers posed with arms crossed, ink signed on verso, "James B. Moore / Capt.," possibly from the 7th Infantry, although difficult to discern; unidentified officer resting his hand on the shoulder of an infantryman, dated "Aug 1863" on verso; three unidentified officers posed together; mustachioed captain sitting with legs crossed, holding his sword in one hand and gloves in the other; standing view of an officer holding a sword at his side; and bust portrait of young soldier boldly autographed on verso by subject whose name is difficult to discern, although he signed as "2nd lieutenant, Co. B, 10th, Co. A."

Between April and July of 1864, the 80th, 82nd, and 84th US Colored Infantries were on garrison duty at Port Hudson, Louisiana.

Toning to each. Some with light soiling. Light corner/edge wear to mounts.

Some images have lightened a bit, including view of mustachioed captain, which also includes minor surface abrasion along right edge of mount.