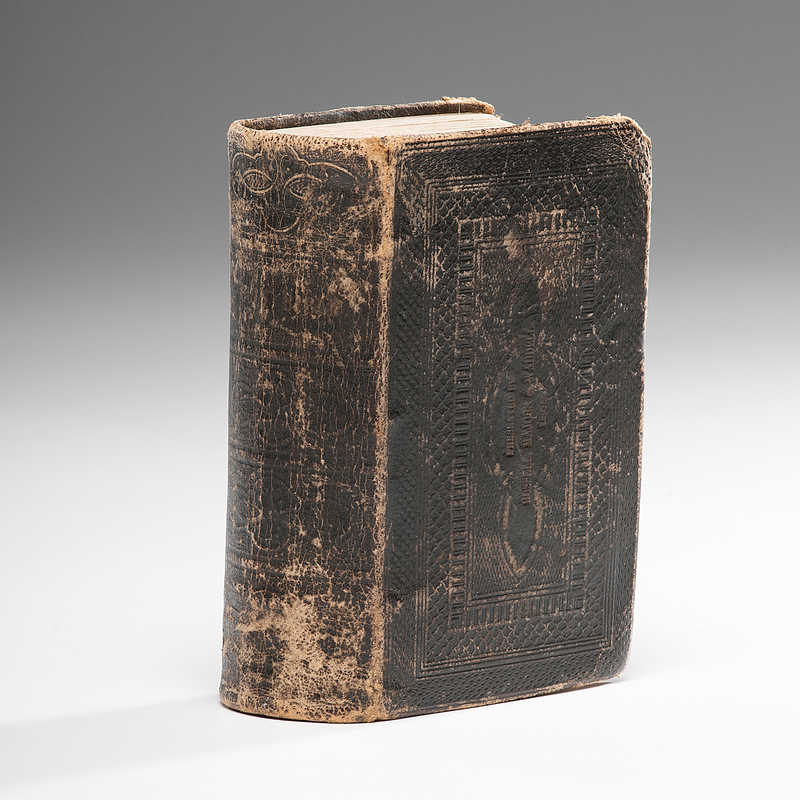 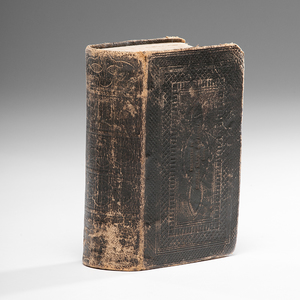 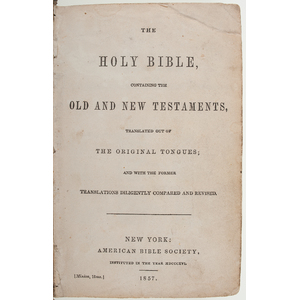 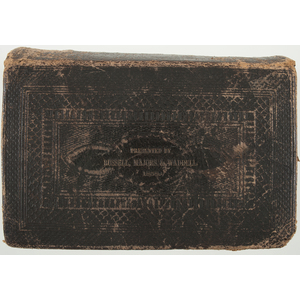 The Holy Bible, Containing the Old and New Testaments, Translated out of the Original Tongues; and with the former translations diligently compared and revised. New York: American Bible Society, 1857. 18mo, full embossed leather, 1276pp present (of 1278). Stamped on front in gilt letters "Presented by / Russell, Majors & Waddell / 1858." Dimensions: 4 x 5.75 in. x 2.25 in. thick.

In the Transactions and Reports of the Nebraska State Historical Society (1885: pp 35-37), S. F. Nuckolls described working for the firm of Russell, Majors & Waddell. He notes that they began freighting for the government in 1858 from Nebraska City to Utah, New Mexico and other western military posts with 4,000 teamsters, 3,000 wagons and 30,000 oxen.

The firm was founded by William H. Russell, William B. Waddell and Alexander Majors. The latter had been freighting for the government since before 1854 along the Santa Fe Trail, with moderate success. Russell and Waddell partnered in a wholesale trading firm in Missouri in 1852. The two firms joined in 1855 to go after the new military supply contact. They did receive a two-year contract to supply all military posts west of the Mississippi, with the main distribution point being Fort Leavenworth. Alexander Majors oversaw his freighters, including hiring and making sure operations ran on time. Even though there was a major initial capital outlay for warehouses, stables, wagon shops, etc., and men needed to be housed, paid, etc. In spite of this, the company made over $300,000 in those first two years.

Their efficiency landed them a contract extension for two more years. Just a month into the second contract the Utah War erupted and the United States sent a couple thousand troops west to control the Mormons, and Russell, Majors and Waddell contracted to transport millions of pounds of freight to these troops. This sudden expansion required the company to borrow funds. But the war impacted the freight trains, also and the company lost over $125,000 in goods and equipment, nearly bankrupting them, and the Army would not reimburse them (partly because Congress did not like this war and would not fund it). They had no more credit against which to borrow.

William Russell had formed another company hoping to transport gold miners to the Rocky Mountains when gold was found there (but these new immigrants were too poor to pay the cost of a stagecoach and many just walked). However, Russell had used the reputation of Russell, Majors & Waddell to borrow for the set-up of his other venture. The firm needed new income to cover the debts of both companies. They hoped picking up government mail routes would do that. It is unknown who came up with the idea of the Pony Express, but Russell, Majors & Waddell were the ones to make it work - for nineteen months, anyway.

Alexander Majors was a religious man, and insisted on gentlemanly, moral behavior. He ordered 300 Bibles from the American Bible Society (and the order shows in ABS's 45th Annual Report for May 1861).  He gave one to each of his teamsters to carry with them on the road, hence these are small books. He also had each man sign a pledge: "I, _____, do hereby swear, before the Great and Living God, that during my engagement, and while I am an employee of Russell, Majors and Waddell, I will, under no circumstances, use profane language, that I will drink no intoxicating liquors, that I will not quarrel or fight with any other employee of the firm, and that in every respect I will conduct myself honestly, be faithful to my duties, and so direct all my act to win the confidence of my employers, so help me God."

Nuckolls relates the talk Majors gave the men: "I am a moral and religious man, and feel it my duty as a member of society to carry out and enforce so far as possible a wholesome moral influence; therefore I give every employe [sic] one copy of the Holy Bible to defend himself against moral contaminations, and also a pair of Colt's revolvers and a gun to defend yourselves against warlike Indians; and each of you are required to sign a contract to the effect that while in our employ you will not use profane language, nor get drunk, nor gamble, nor treat animals with cruelty, nor interfere with the rights of citizens or Indians; nor do anything ungentlemanly towards any one; and a violation of this agreement shall make you liable to a discharge and a forfeiture of your wages. We pay the highest prices that are paid for the services that you are now about to engage in, and your good behavior is a part of the value that we receive for what we pay you."

Majors did provide these 300 Bibles to his employees. It is unknown whether anyone lost their employment because of violations of these rules, but it has been suggested that few of the men took the pledge seriously. The freighters and Pony Express riders had a reputation of being a rough lot.

Since there were only 300 of these Bibles ordered (another shipment was ordered for the Overland Mail crews, but they carry the date 1859), very few survive. A "census" of known Bibles was conducted in 1960, and only 12 institutional copies were located (Heritage Auctions, 2007). Heritage Auctions has listed five since November 2007 (plus May and Oct. 2010, May 2011, Feb. 2012). Another was sold by PBA Galleries in August 2005. But these very seldom come to market.

Missing one leaf with pages 1277-1278, text ends in the middle of Revelation 21: 20. Corners bumped and somewhat worn, some wear to hinges, but not split. Leather still surprisingly supple. Gilt faded. Pastedowns with some tears, free endpapers missing. There is a spot of adhesive on the front pastedown where a label was affixed at some point. A few signatures loose, but present. Very little foxing and almost no toning of leaves. In spite of the missing page, this copy is in better shape than most of the others that have come to market.