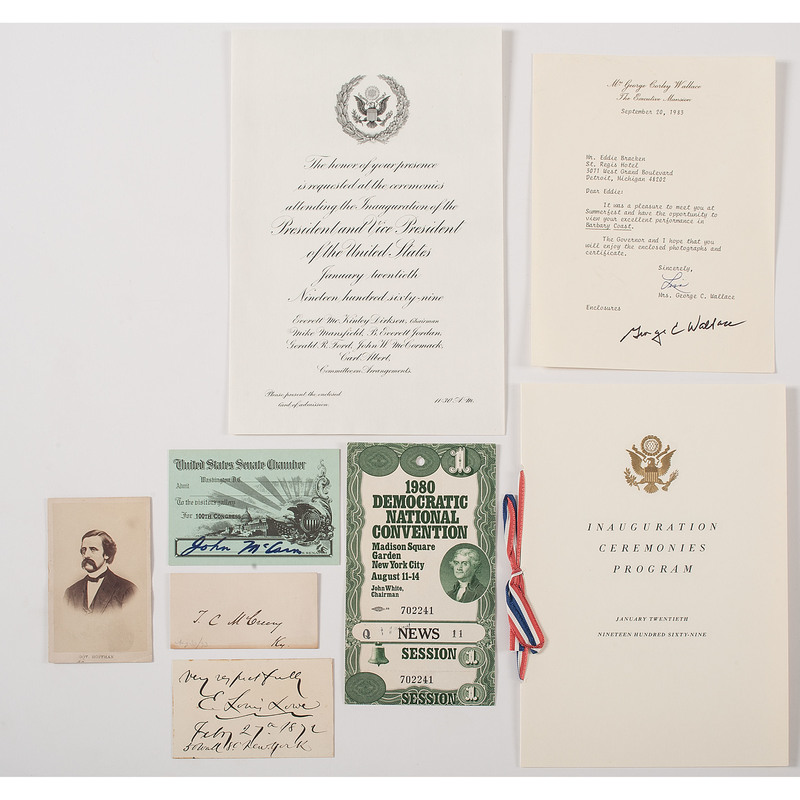 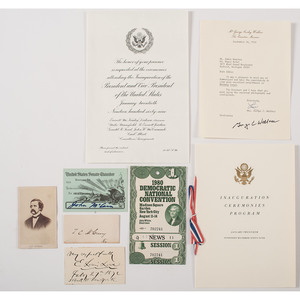 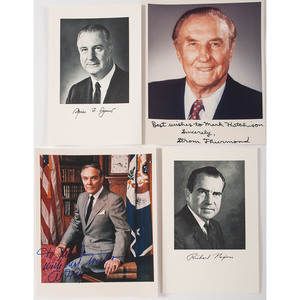 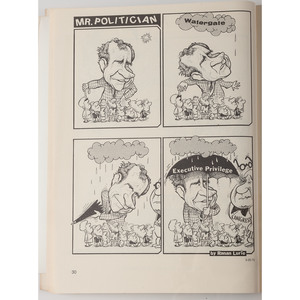 CDV of John T. Hoffman, with "Gov. Hoffman" in lower margin on recto. John Thompson Hoffman (1828-1888) was the Recorder of NYC during the Civil War, the Mayor of the city in the years just after (1866-1868) and Governor of New York (a869-1872), the last mayor of the city to be elected governor to date. Rumored association with the Tweed Ring ruined Hoffman's aspirations of a Presidential run, although there has never been any evidence of an association. Hoffman and Tweed seem to have simply shared some goals, such as more local autonomy for New York City. Both were Democrats and worked well together.

Calling card with signature of T.C. McCreery. Thomas Clay McCreery (1816-1890) was the Kentucky senator during Reconstruction (1868-1871, 1873-1879). McCreery delivered a speech 13 Dec. 1870 arguing that Arlington should be restored to the Lees, particularly Mrs. Lee, since the old warrior had just died and his widow had few resources to support her. This plus helping former Union General Steven Burbridge get a position as revenue collector probably contributed to McCreery's defeat in 1870.

Calling card with signature of "E[noch] Louis Lowe, Feby 27th, 1872, 50 Wall St. New York." Lowe (1820-1892) was Governor of Maryland (1851-1854) just before the Civil War. During his tenure, Maryland adopted her Constitution (1851) and the Baltimore and Ohio Railroad was completed to the Ohio River. During the Civil War he supported the Confederacy and lived in Richmond, VA and Milledgeville, GA. After the war he returned north to join a law firm in Brooklyn, NY, where, apparently, this card was obtained.

Invitation and ticket to the 20 Jan. 1969 Inauguration Ceremonies. Ticket to Section H North in the inaugural stands. In original (unaddressed) envelope. Packet includes invitation, ticket, program which is tied with red-white-blue ribbon, and photo of Richard Nixon with printed signature below.

Press ticket for the 1980 Democratic National Convention, Aug. 11-14. With original lanyard. 3.5 x 6.25 in. Excellent (unused?) condition. Jimmy Carter and Walter Mondale were chosen for a re-election bid, unsuccessful though it turned out to be.

8 x 10 in color photograph of Alexander Haig. Lower left inscribed "To Mark with best wishes" and signed "Al Haig" in blue felt-tip. Alexander Haig (1924-2010, USMA 1947) was Ronald Reagan's Secretary of State and Richard Nixon and Gerald Ford's chief of staff. Prior to his cabinet positions he was Supreme Allied Commander Europe among other positions as US Army General.

TLS, 1p, 20 Sept. 1983. On Executive mansion letterhead. Cover letter to Eddie Bracken noting that the Wallace's had seen his performance in "Barbary Coast." Originally accompanied photos, not with the letter. Signed "Lisa" (Lisa Taylor Wallace) and below, George C Wallace. Wallace (1919-1998) was governor of Alabama (1963-1967, 1971-1979, 1983-1987 - total 16 years plus), known for his opposition to desegregation. He even ran in the Democratic primary on segregation platforms in 1964, 1972 and 1976. In 1972 he survived an assassination attempt that left him paralyzed from the waist down for the rest of his life. Although he was never successful in obtaining a national office, he has been described as "the most influential loser" of 20th century politics.

Plus Lurie, Ranan R. NiXon Rated Cartoons. New York: Quadrangle/The New York Times Book Co., 1973. 4to, paper with printed wraps, 320pp. Included are 3 photos apparently taken for publicity, one of the artist, the other two sample cartoons, all with publication information and pricing.

All very good or better. Some minor edge toning on a couple of the 19th century cards.