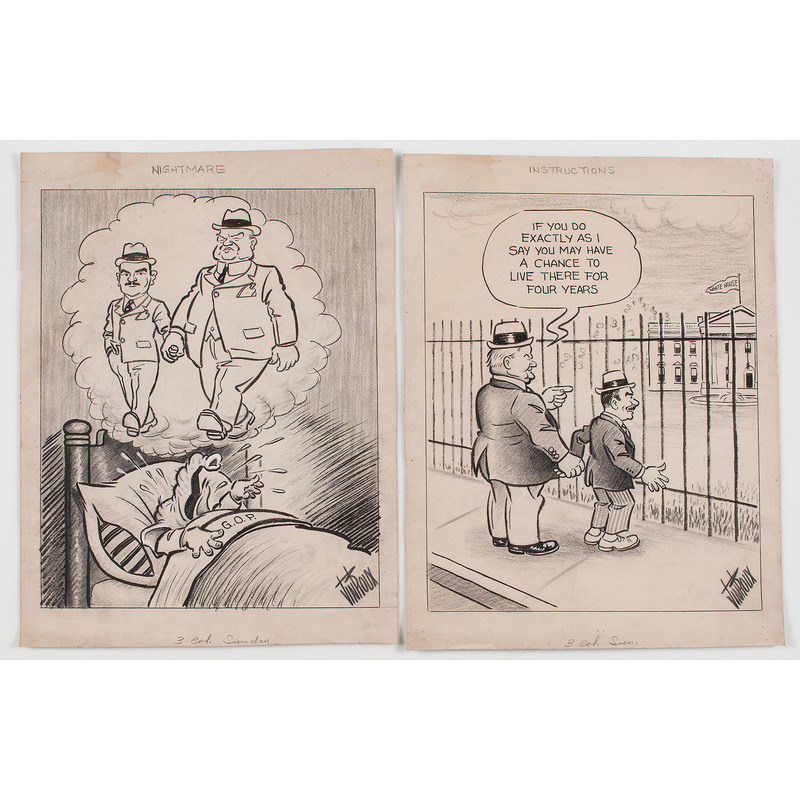 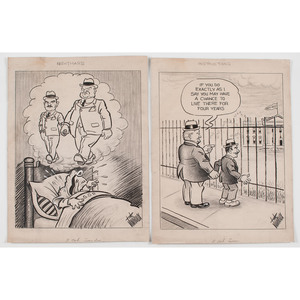 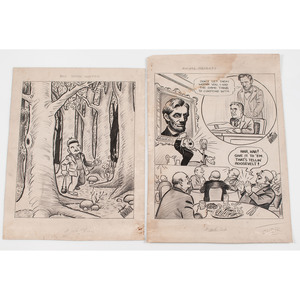 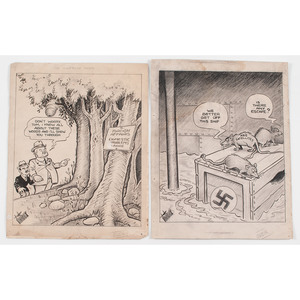 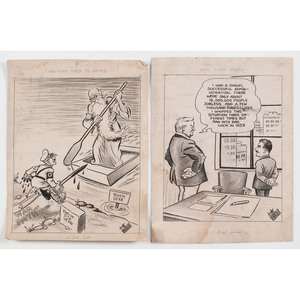 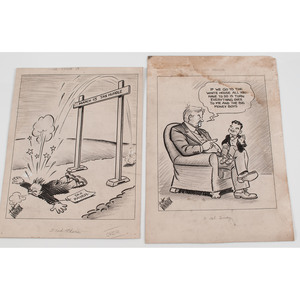 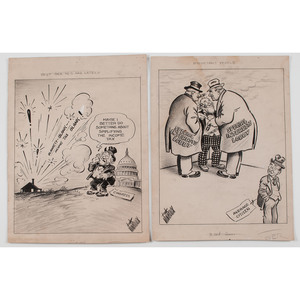 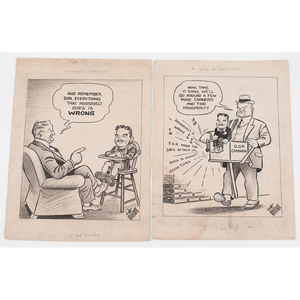 14 cartoons by Kendall Vintroux (1896-1973) on 8 heavy paper sheets. each 13 x 18 in., some with cartoons on both sides. Eight of these feature Thomas Dewey; in seven of them he is being led by Herbert Hoover. Each with pencil title at top and intended day at bottom (usually noted as "3 col. Fri." or 3 col. Sunday" for example). Some of these demonstrate that many things have not changed in many decades, such as the need to simplify the tax code! Most of these cartoons seem to date from around 1944 or so.

On verso of the above, "Important People." Depicts two very large men labeled "Special Interests Lobby" both cornering a small man labeled "Congress." "Average Citizen" is left out of all action (and looking a bit shabby).

2) "Campaign Strategy" depicts Hoover sitting in his easy chair, Dewey facing him in short pants, sitting in a high chair. Hoover says, "And Remember, son, everything that Roosevelt does is WRONG."

Verso of this one, "Best Idea He's Had Lately." "Congress" is looking at a house in the distance with much obscenity emanating from it, part of which includes the words "Income tax." Congress says: "Maybe I better do something about simplifying the income tax."

4) "Instructions" shows Hoover and Dewey looking at the White House through the fence. Hoover says: "If you do exactly as I say you may have a chance to live there for four years." (verso blank)

5) "The Helping Hand" has Hoover and Dewey at the edge of a forest. One tree has a sign on it "Foreign Affairs / Domestic Problems Woods." Hoover tells Dewey: "Don't worry, Tom, I know all about these woods and I'll show you through."

On verso: "One More River to Cross." The river is "River Styx" with a gentleman who appears to be "Father Time" in a bateaux pushing away from the shore. Hitler is running to the boat along the "War Path," bloody sword in hand. A marker on shore notes "End of 5th Year."

6) "Beginning to Sink" shows rats on an ammunition box with a swastika on the end floating in water in the hull of a ship. Three rats are on the box, one with "Axis Satellites." One rat says "We better get off this ship," and another asks, "Is there any escape?"

On verso: "Hard Luck Story." Hoover and Dewey look out of an office window at skyscrapers. Hoover says, "I had a great, successful administration. There were only about 12,000,000 people jobless and a few thousand banks closed. I whipped this situation three different times but ran into bad luck in 1932."

7) "Big Game Hunter" shows Thomas Dewey walking through the woods with a stone in a sling shot.

On verso: "He Made It." Depicts a "Tax Payer" flat on his face after clearing the "March 15 Tax Hurdle."

8) "Unselfish Advice" shows Hoover in his armchair with Dewey on his knee. Hoover tells Dewey: "If we go to the White House all you have to do is turn everything over to me and the big money boys."

On verso: "History Repeats." A speaker is giving an emotional address beneath a portrait of Abraham Lincoln. There are several tables with gentlemen at dinner, one of whom says: "Har, Har! Give it to 'em. That's Tellin' Roosevelt!" in the upper right is FDR at his desk, the ghost of Abraham Lincoln stands behind him with hands on FDR's shoulders saying: "Don't let them worry you. I had the same thing to contend with."

Kendall Vintroux was born in Frazier's Bottom, West Virginia and attended a one-room school. He dropped out as a teenager to work on the farm. In his spare time, he drew. He served in the first World War, sketching in his free time at Camp Hancock, Georgia.

He sent a cartoon to the Charleston Gazette and the paper hired him as a cartoonist in 1922. He remained with the paper until he retired in 1968. Besides political cartoons, he drew a cartoon for the Sunday paper, "Dog Wagon Stuff," based on the regular customers at the Dog Wagon, a local Charleston restaurant. Vintroux died in Charleston in 1973.

All with some ink smearing. A few spots of white cleaning up some lines.