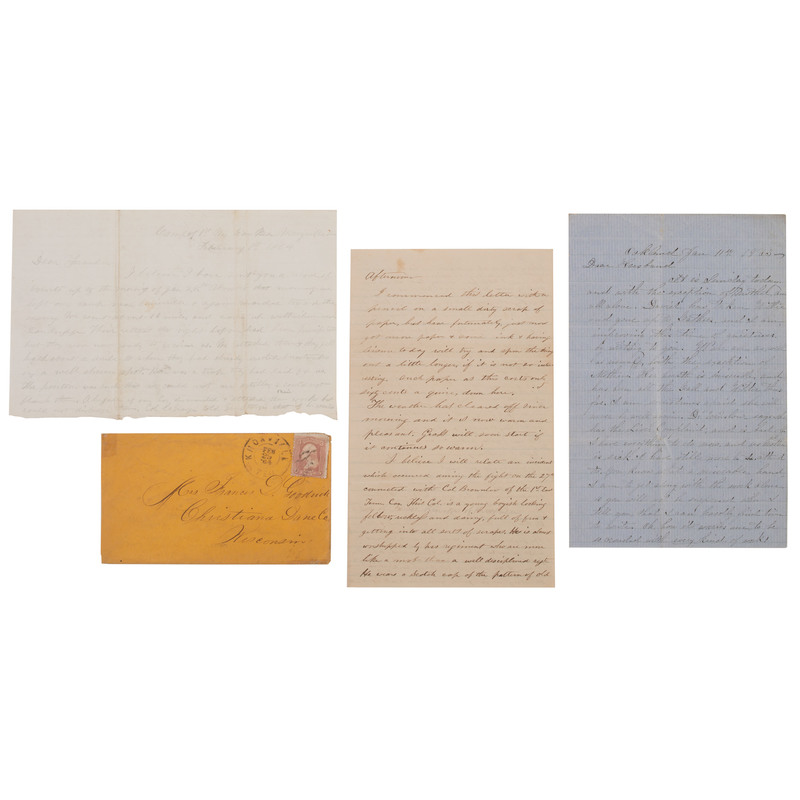 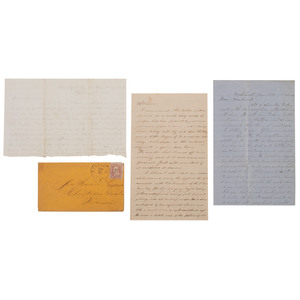 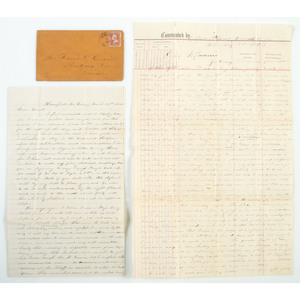 Lot of 4 letters written by Perry C. Goodrich to his wife, Frances, from Missouri, Alabama and Tennessee as the 1st Wisconsin Cavalry moved through those states. Accompanied by a letter from Frances to Goodrich.

Perry C. Goodrich enlisted in October 1861 as a private and mustered into Co. I, 1st Wisconsin Cavalry. He was promoted to sergeant major in April 1864, and adjutant in January 1865. In a letter to his wife, written from West Plains, Howell Co., MO, dated February 3, 1863, Goodrich describes in detail some of the items “confiscated” as the 1st Wisconsin Cavalry rode through Howell County, MO. “We stripped the country driving the cattle and sheep before us & leading the horses. Perhaps we would stop at night in a farm owned by a ‘widow’ with a large family of children – that is the man was in the southern army or hid out in the bush. After feeding out her corn and burning up her fences, killing hogs & chickens, stealing cups, spoons & frying pan out of the house smashing up her bee hives to get honey & taking away all the sorghum molasses to be found, then in the morning we would take away her oxen, cows, sheep and last ‘nag’ leaving her without provisions or the means of raising any the next summer.”

Goodrich describes his thoughts on acquiring the spoils of war. “To me it is very disagreeable. I never yet have confiscated the least thing except when positively ordered to do so. We had collected some 200 head of cattle 100 sheep and nearly every man had a horse to lead.”

On July 16, 1863, Goodrich writes his wife from Huntsville, AL. “In fact all the country we passed through since we came to Kentucky is good except some of the northern part of Tennessee which is rocky and somewhat barren.” He relates that discipline in Alabama is much more intense than in Missouri, and that during marches no one is allowed to fall out of ranks. This order severely tested the conscience of the sergeant. The desire he had to sample the Alabama Blackberries was extremely intense. As his unit marched past more and more patches of berries he ignored the risk of severe discipline at the hands of the Union army. The perimeter of the camp could not be crossed but Goodrich executed a successful plan to cross the boundary and consume the “the largest, finest and sweetest ones [ blackberries ] I ever saw.”

After consuming his fill of blackberries, Goodrich thought deeply of how his desire to be home was present almost every hour and every day. He states, “Truly – there is no place like home. Other affections are weakened by time, grow cold and at last die out in forgetfulness. But the love of home never dies, never weakens, never grows cold.”

As the 1st Wisconsin marched through the south, Goodrich notes “The white women and what few men are left, hate the Yankees, so that they will not deign to show themselves to look at us as we pass.” Just the opposite emotion was displayed by “swarms of slaves of both sexes of every shade of color, of all sizes and every degree raggedness are collected in groups or perched on fences showing their ivory and giving other unmistakable signs of delight...Bress de Lord, De Lord be praised!” were the words of an aged woman who probably had seen a large family of children sold away from her. “Many of the planters about here have grown immensely rich from the unpaid labor of these poor people.”

The last letter written by Goodrich from an area near Marysville, TN, dated February 1, 1864, describes a battle story involving a young, aggressive, “wreckless and daring” Union colonel named James Patton Brownlow of the 1st East Tennessee Cavalry. The colonel charged forward with so much ferocity that he out rode his support. After finding himself alone with a rebel prisoner from Texas, he realized he was in territory controlled by the Confederates. His prisoner asked “Colonel am I your prisoner or are you mine?” Since neither the colonel nor the prisoner had the upper hand, a local truce was negotiated between the two soldiers. The colonel gave the Texan his arms and the Texan helped the colonel clear the Confederate lines. At their parting the colonel gave the Texan his gold watch and chain.

Through years of bloody confrontations, Perry Goodrich endeavored to perform his duty, save the Union and return to his loving wife Frances.