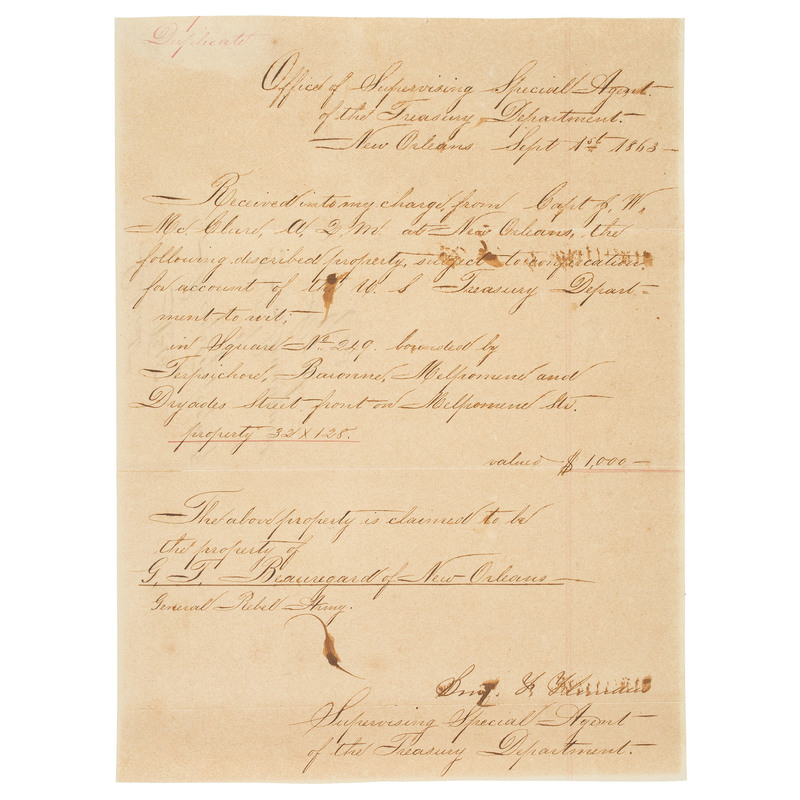 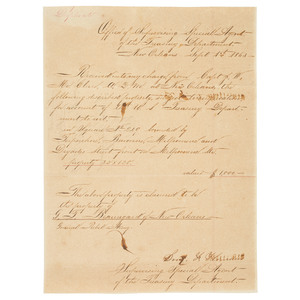 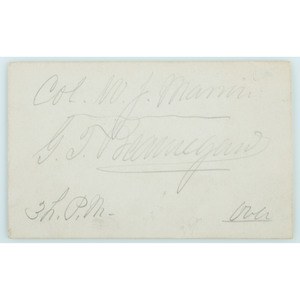 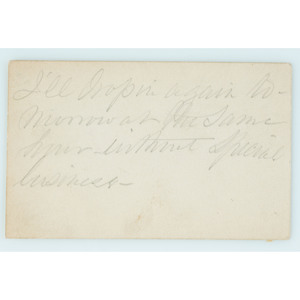 Beauregard, P.G.T. (1818–1893). 1p, with docketing on verso. Federal Orders, "Office of Supervising Special Agent of the Treasury Department," New Orleans. September 1st, 1863. "Received... the following described property, subject to confiscation... in Square No. 249, bounded by Terpsichore, Baronne, Milpomene and Dryades Street, front on Milpomene St., property 32 x 125. Valued $1,000. The above property is claimed to be the property of G.T. Beauregard of New Orleans, General-Rebel-Army. Benj.(?) Y. Williams, Supervising Special Agent of the Treasury Department." Marked "Duplicate" in red upper left and in Docketing on verso. (There has been some rebuilding and renaming of streets over a century and a half, but this block should today be somewhere around the SoFAB Institute/Museum).

Pierre Gustave Toutant-Beauregard (1818-1893), born to a French Creole family in Louisiana, with French as his only language at home. He was sent to a "French school" in New York City for what we would consider "high school" these days, and it was there that he learned English. He then attended USMA, graduating in 1838. One of his professors was Robert Anderson, whom Beauregard would face at Fort Sumter some two-plus decades later. When enrolling at the Academy, he dropped the hyphen in his surname to "fit in" more with his classmates and did not use his first name much, treating "Toutant" as a middle name. Most signatures are simply "G.T. Beauregard," as is the one in this lot. He excelled in both artillery and engineering.

Beauregard served in the Mexican War as an engineer under Gen. Winfield Scott, where he won brevets for three battles (Contreras, Churubusco and Chapultepec), having been wounded in the last. Robert E. Lee was also an engineer in Mexico, and a kind of rivalry developed between the men as a result of their service (Lee received more brevets than Beauregard). After the war he was in charge of the Mississippi River and lake defenses in Louisiana, although much of his time was spent elsewhere along the Gulf (Florida to Alabama).

Beauregard had just been appointed superintendent of the USMA in January 1861. (Lee had served as superintendent from 1852 to 1855.) When Louisiana seceded, he was forced out after only five days. He resented the assumptions surrounding that event, so he resigned and offered his services to the Confederacy, becoming its first general officer. He was sent to inspect the defenses of Charleston Harbor, which he found to be in disarray. As political tensions mounted in March and April of 1861, Beauregard insisted the Union fortifications, commanded by his former instructor, Robert Anderson, be surrendered (before they were re-provisioned by Washington). Eventually, Beauregard ordered the first shots fired at Fort Sumter, and the rest is history. He then went on to fight in the first major battle of the war, Bull Run/Manassas Junction. He would fight in many of the bloodiest battles - Shiloh, Corinth, Fort Wagner, subsequent battles at Charleston Harbor, Bermuda Hundred, Petersburg.

Some ink ghosting and smears on document ("Williams" was not dry when paper folded). Otherwise, minor toning.