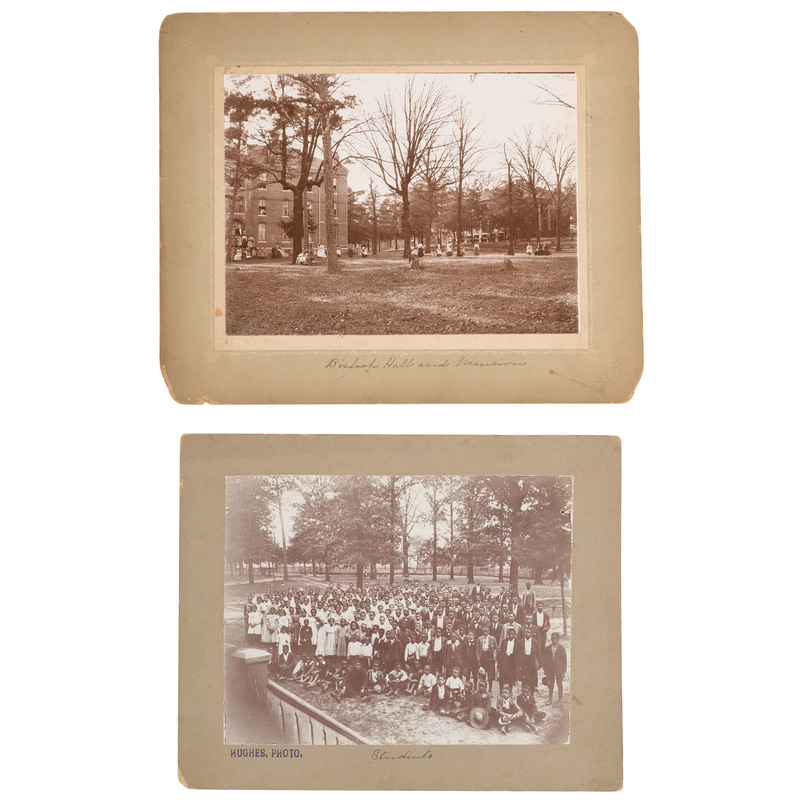 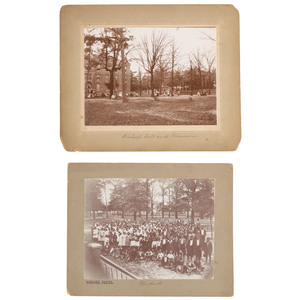 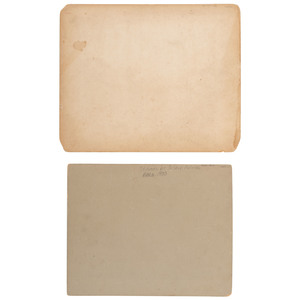 Lot of 2 card-mounted photographs of students at Bishop College, a Baptist college for African Americans in Marshall, Texas.

Mose E. Hughes: Marshall, Texas, n.d., ca 1900. Photograph shows a view of Bishop's campus, with a multi-story brick building at right, with a second building at right partially obscured by trees. A large group of African American students, predominantly women, populate the scene, with a handful of men in dark suits closer to the building in the background. Captioned in ink, "Bishop Hall and Mansion," with studio imprint of Hughes at lower right. Bishop Hall, presumably the building at left, was a women's dormitory. The structure in the background, featuring a two-story columned portico set on brick piers, was once a plantation mansion called Wyalucing. It was sold to the American Baptist Home Mission Society in 1881 and variably served as the President's home, an administrative building, and the college conservatory.

Mose E. Hughes: Marshall, Texas, n.d. ca 1900. African American students, both men and women, of various ages are captured here, posed on campus with a low fence visible in the background. Several benches dot the composition, some with stacks of books on top. "Students" inscribed in ink below photograph, and stamped "Hughes, Photo." at lower left. In its nascence, Bishop operated both a grammar school and high school in addition to the college. Industrial skills such as carpentry and wood-working were also taught, though its primary college-level programs were in the fields of religion and education.

Bishop College was established in 1881 by the American Baptist Home Mission Society as a coeducational school for African Americans. It was named for Nathan Bishop (1808-1880), a white attorney and philanthropist who supported the establishment of the school. With Bishop's support, the Society purchased land in Marshall from both white and black property holders to establish and expand the college campus. By 1910, Bishop College consisted of seven brick buildings, including student housing, classrooms, and administrative spaces. After the school relocated to Dallas in 1961, its Marshall campus was sold and all of the buildings were demolished.

General wear, including toning and light staining. Minor losses to mount corners. Student image with some spotting to photograph and unevenness at edges.