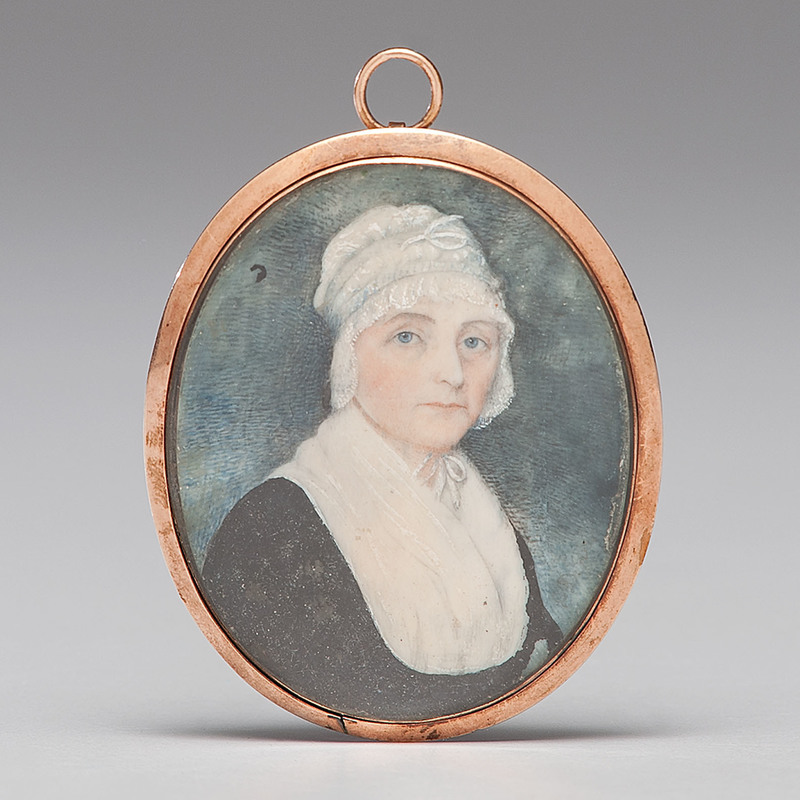 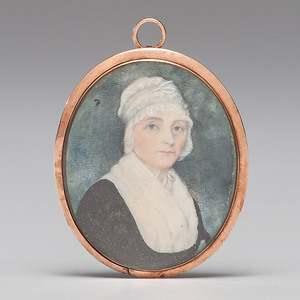 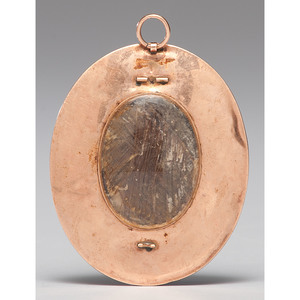 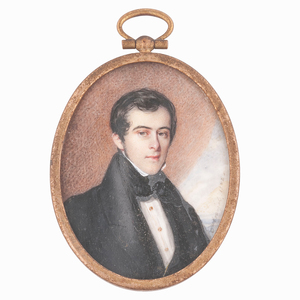 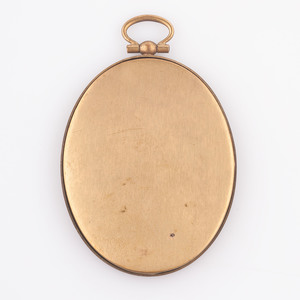 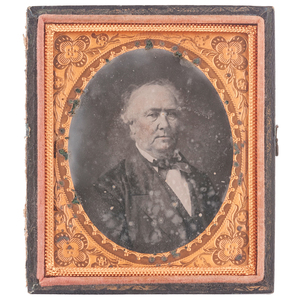 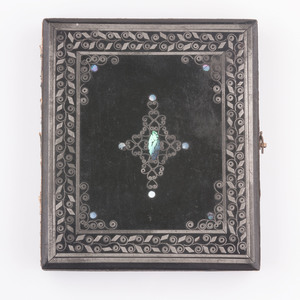 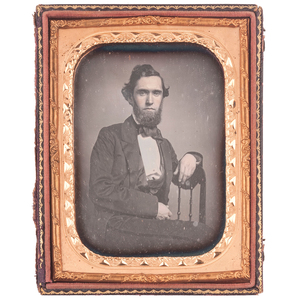 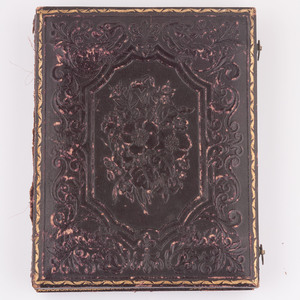 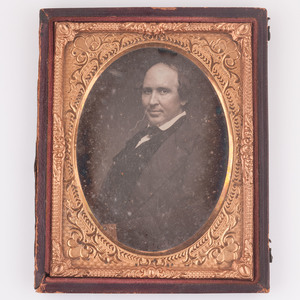 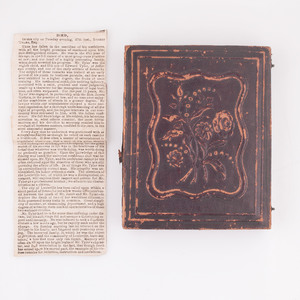 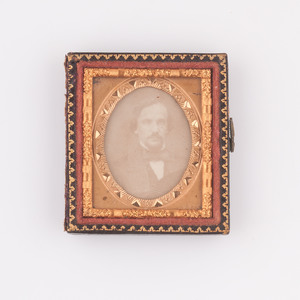 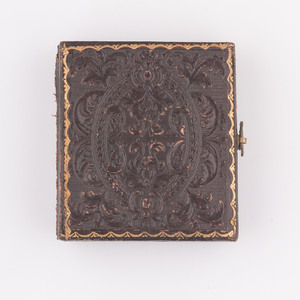 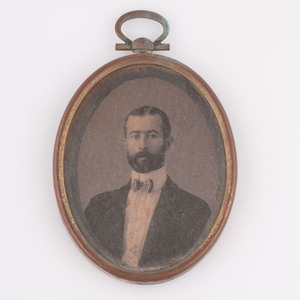 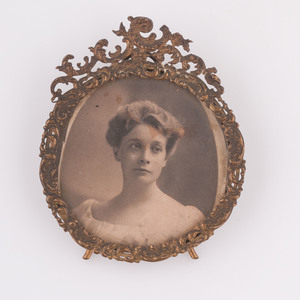 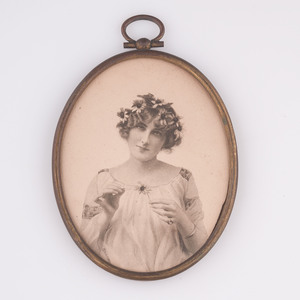 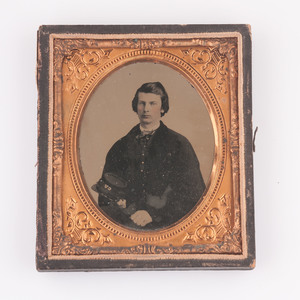 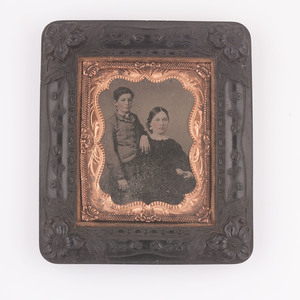 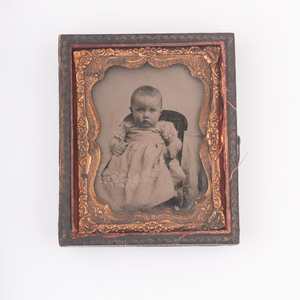 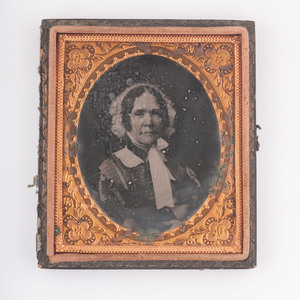 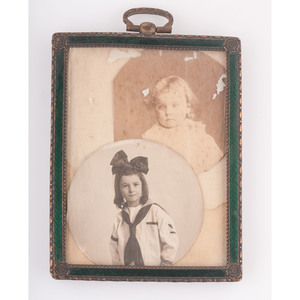 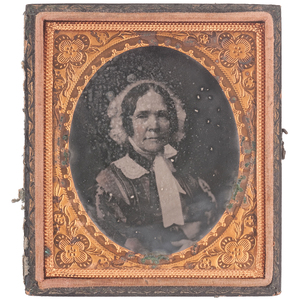 Lot of 14 images representing two of Kentucky’s first and most influential families. Images in the collection depict descendants of Kentucky heroine Jemima Suggett Johnson, a leader of the “Women of Bryan’s Station,” as well as members of the Tyler family of Louisville which was related to the Johnsons by marriage. Collection spans early nineteenth century through early twentieth century. The Johnson/Tyler image collection includes the following:

Oval portrait miniature on ivory believed to be of Robert Tyler (1805-1852). Signed "Dubourjal, 1832." Approx. 2.25 x 3 in. French portrait artist Savinien Edme Dubourjal (1795-1853) worked in the United States as well as France, though the exact dates of his time in the United States are unclear. Dubourjal exhibited at the New York Academy and appears to have been active from the early 1820s through 1850. His work is relatively rare, and his sitters included many prominent individuals of the time period such as Henry Clay and John C. Calhoun.

Two sixth plate melainotypes, with the back of each plate inscribed "Febry 1858," of Captain Henry Johnson (1794-1862) and Elizabeth Julia Flournoy Johnson (1800-1882). Images appear to have originally been housed in matching cases but only one mother of pearl inlaid front case survives on which the velvet pad is marked "Theo. Harris / Artist / Louisville." Captain Henry Johnson, the youngest son of Jemima and Robert Johnson, served with his brother (and future US Vice President) Richard Mentor Johnson during the War of 1812. Following the war he married Elizabeth Julia Flournoy (1800-1882) of Fayette County, Kentucky. The two maintained plantations in both Kentucky and Mississippi.

Jemima Suggett Johnson (1753-1814) and her husband Robert Johnson came with their children to Kentucky ca 1780 settling first in Louisville and then at Bryan’s Station, an early, fortified settlement near present-day Lexington, Kentucky. Tradition states that on August 15, 1782, while British and Native American enemies surrounded Bryan’s Station, Jemima Johnson led a group of pioneer women and girls outside of the fort to a nearby spring where they could fill their buckets. These “Women of Bryan’s Station” sustained the garrison by providing drinking water for the fort’s defenders as well as water to douse the burning arrows that were shot into the fort’s confines once the battle ensued.

Jemima Johnson’s act of heroism firmly established the Johnson family in Kentucky lore, however, subsequent generations of Johnson descendants built upon and cemented an impressive family legacy. Together with her husband, Jemima would bear eleven children and found a powerful political and economic dynasty. Among her children several served in the War of 1812 and achieved national political office.

Jemima Johnson’s grandson, Charles Flournoy Johnson (1829-1920), married Mary Lawrence Tyler (ca 1835-1898) in 1856. Mary L. Tyler was the daughter of Mary Lawrence Chambers Tyler (1810-1891) and Robert Tyler (1805-1852), a prominent Louisville attorney and landholder. The Tyler family was prominent in its own right and had deep Kentucky roots. Robert Tyler’s grandfather, Edward Tyler II, journeyed down the Ohio River from Pennsylvania in 1780, before settling with his family near the Falls of the Ohio. Edward became one of the largest landowners in the area, passing land to his sons and playing an important role in the development of Louisville, Kentucky. With the union of Charles F. Johnson and Miss Mary L. Tyler, two of Kentucky’s first families were joined.

The image collection was consigned by an individual unrelated to the Johnson/Tyler families, but originates with Mary Chambers O’Brien Grandy (1908-2003), a direct descendant of Charles Flournoy Johnson and Mary Lawrence Tyler Johnson. Accompanying the images are two binders containing Johnson and Tyler family history and consignor research into the image collection.