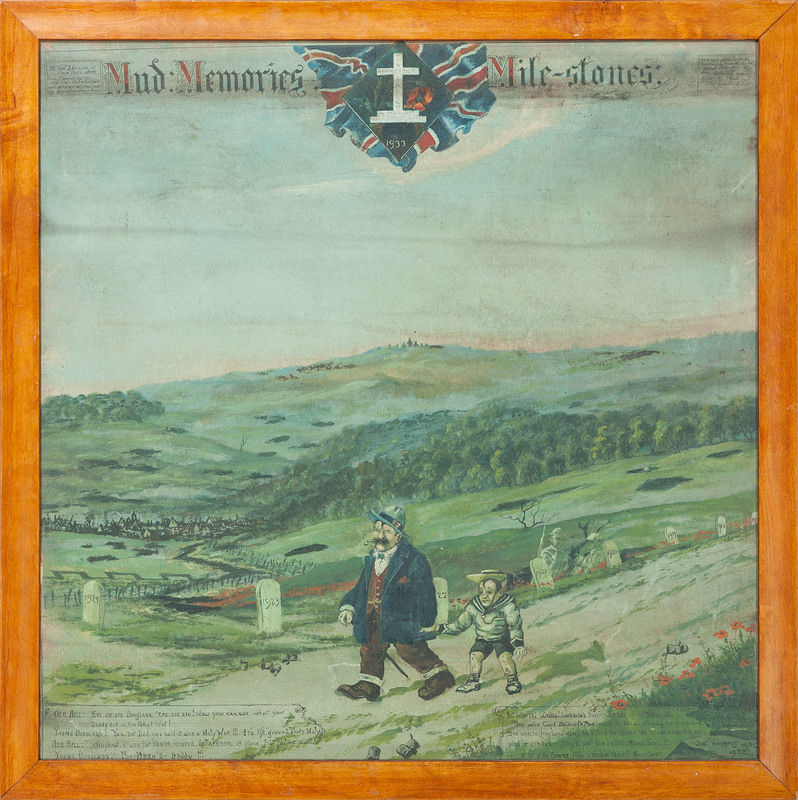 Depicts old mustachioed man smoking a pipe leading child by the hand down a road lined with gravestones (one for each year, from 1917-1924 in sight) with ghosts of soldiers visible between two of the gravestones. Emptied cans are scattered in the road and red flowers bloom in the grass. Beautiful landscape of hills, trees, and town below covers area above the main scene.

Inscriptions cover several areas. At the top, a British flag and cross inscribed, "Remember the Fallen, A Free Gift from a Grateful Country," separate a heading that reads, "Mud: Memories, Mile-stones:" Inscriptions at the top right and left contain verses from what appears to be a soldiers' song or poem. Inscriptions at the bottom provide captions and quotations for the characters in the painting.

Bottom left caption reads: "Old Bill: 'Ere we are, Douglass. 'Ere we are! Now you can see what your Daddy did in the Great War! Young Douglass: Yes, but Dad, you said it was a Holy War!!! It's the 'ground' that's Holy. Old Bill: Anyhow, it was for Truth, Honour, & Freedom: A place fit for... Young Douglas: For Hero's Daddy!!!"

Bottom right caption reads: "1st Wraith: Grikey! Look who's here. Old Bill of the Better 'ole. 'Im who Capt Bairnsfather used to draw shewing the kid round. 2nd Wraith (from Gornal Wood) He'll find the Better 'ole at ode Rooker's place when he gets back. - They'll put him on the Means Test.!!!...A bit of the Somme from a machine gunner's Range Chart."

Bruce Bairnsfather was a World War I cartoonist best known for his character, "Old Bill," a mustachioed soldier in the trenches depicted in a humorous light with captions and quotations. One of the most famous of these cartoons depicted "Old Bill" hiding with another soldier in a hole while explosions are going off in the background. The caption reads, "Well if you knows of a better 'ole, go to it!" This is probably the "better 'ole" to which the wraiths in this oil painting are referring.