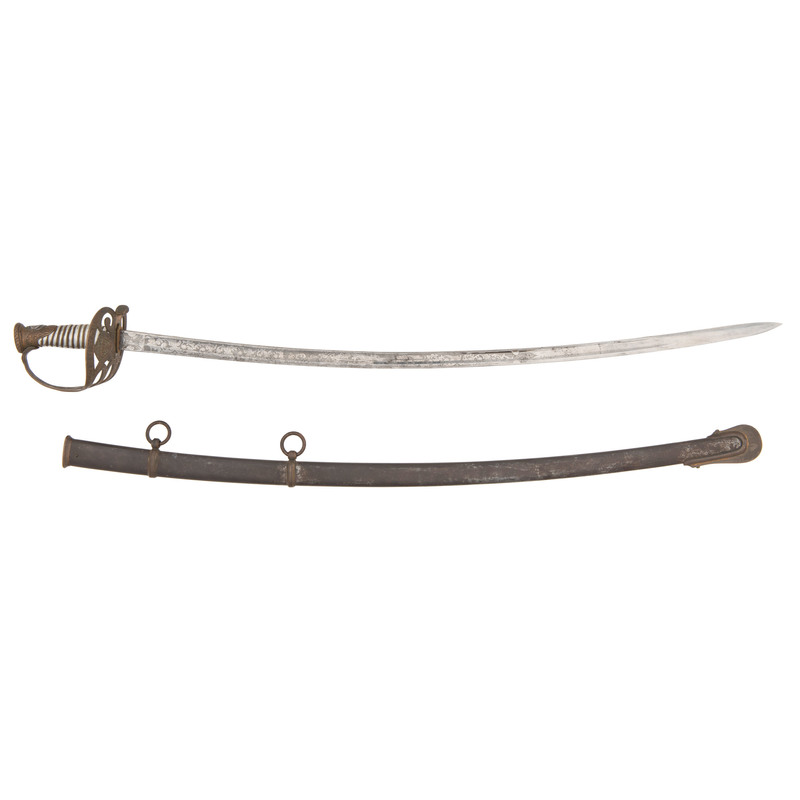 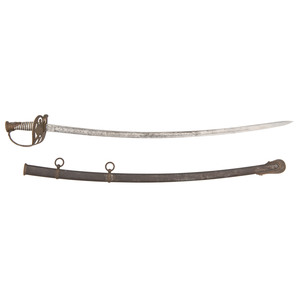 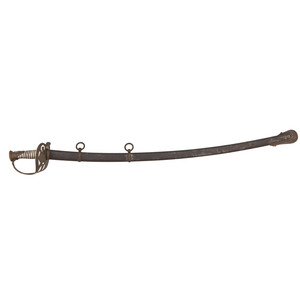 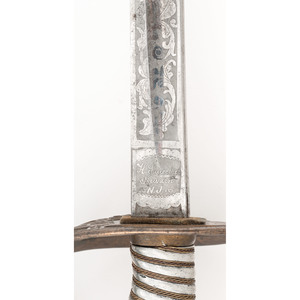 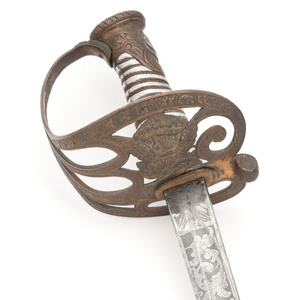 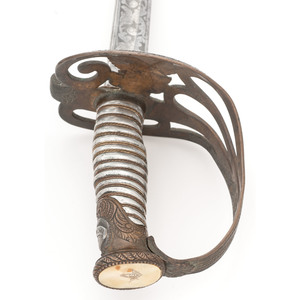 32.75" blade length, with etched panels of floral designs. On one side has the US Phrygian helmet-style pommel; non-regualation guard with branches and eagle. On the top of the pommel is inlaid with a perfect oval of pearl with a compass and square with the letter "G" a Masonic emblem.  Maj. George B. Cook was a Mason. Silver handle ribbed and wrapped with gilt brass wire. Metal scabbard with brass bands.

George Bucher Cook (1829-1894) was proprietor of a dry good business when he enlisted in the 4th Connecticut Infantry on May 22, 1861 as a 1st Lieutenant in Company D. The new regiment performed mostly guard duty at various points along the Potomac before being assigned in October to the burgeoning Washington Defenses at Forts Richardson, Scott, and Barnard. Here, Lieutenant Cook was promoted to captain on November 6, 1861. The fortifications contained considerable artillery and over the winter months the companies drilled tirelessly and became proficient in exercising the guns, whereby on January 2, 1862 the 4th Connecticut was reorganized and redesignated as the 1st Regiment Connecticut Heavy Artillery. In April 1862 the regiment took the field for the Peninsula Campaign as part of the army's heavy Siege Artillery Brigade. Near Yorktown the regiment entrenched and prepared for extended siege operations. Captain Cook's Company C operated from a works known as Fort No. 9 manning ten 10-inch mortars along with the men of Company E. The mortars were not brought into action as it was discovered on May 4 that the Confederates had abandoned the Yorktown line. Subsequently, most of the regiment marched to join General Fitz-John Porter and was assigned to Sykes' 5th Corps division to serve as infantry, a portent of the future.The regiment participated in several strenuous reconnaissance-in-force marches while guarding key points against incursion by marauding Confederate cavalry but did not see combat. In June on the eve of the Seven Day's battles several companies among them Company D finally saw action at Golding's Farm where they effectively bombarded Rebel positions being particularly engaged on June 27. The siege train marshaled a number of heavy guns on Malvern Hill which were "gallantry and effectively served in the great battle of July 1" while casualties - including some from friendly fire - were moderate given the intensity of the fighting. The heavy artillerymen were commended by General McClellan in his official report having serviced twenty-six heavy guns during the whirlwind fighting and bringing off all but one, abandoned during the withdrawal due to a broken carriage. Five battle honors were earned: Siege of Yorktown, Hanover C.H., Chickahominy, Gaines' Mill, and Malvern Hill. On August 12 the regiment was ordered to Alexandria where the various companies were placed "from Fort Scott to Fort Ward." On January 22, 1863 Cook was advanced to major. Except for a few detachments, notably during the battle of Fredericksburg, the 1st Connecticut Heavy Artillery would remain largely static until the spring of 1864 when the rear area garrisons were collected together to support Grant's Overland Campaign.

The tumultuous summer of '64 would herald a record of epic service that the regiment's aging veterans would recall with pride. The regiment was concentrated in May 1864 and directed to Bermuda Hundred with some heavy guns but acted primarily as infantry under General Butler, Army of the James, on the Petersburg line. Over the next month the gunner's constructed redoubts and fired over 25 tons of heavy shot and shell. The regiment endured three attacks by Rebel forces including two by infantry that resulted in casualties, as well as a sortie by the Confederate James River flotilla. In late June the entire siege train arrived from Washington and was organized as a independent brigade under Colonel Henry Abbott comprising upwards of 3,500 men, 127 heavy guns, and 73 mortars. Over 1,200 tons of shot and shell were fired during siege operations against Petersburg and culminated with the Mine Explosion on July 30. Eight companies of the regiment serviced the various types of ordnance that delivered 225 tons of ammunition in preliminary bombardment with another 75 tons expended the day of the battle. Immediately afterwards a number of guns with a quantity of stores and ammunition were shifted 82 miles to support fresh operations undertaken by the Army of the Potomac. In the Petersburg redoubts the siege returned to a steady bombardment for the next several months. On September 27, 1864 Major Cook was appointed as Acting Chief of Artillery of the 18th Corps on the Bermuda Hundred line.

On the night of January 23, 1865 four companies of heavy artillerymen bore a distinguished role in breaking up an attempt by the James River Squadron to pass down the river and attack the massive Union supply depot and staging area at City Point, Virginia. The challenge fell to the land batteries as the sole US Navy monitor on station retired in the face of the numerically superior Rebel fleet. During the fight several enemy vessels were hit repeatedly with two being sunk before the Confederates were forced to retire.

On March 25, 1865 a determined Confederate attack - really a forlorn hope - was launched against Fort Steadman and the adjacent works manned by men of the 1st Connecticut Heavy Artillery. The suddenness of General Gordon's pre-dawn onslaught initially overwhelmed and captured the fort causing heavy casualties among the shocked and displaced gunners. All of the heavy guns from nearby bastions that could be brought to bear commenced a terrible fire on the captured works forcing the attackers to take refuge in the bomb proofs. Reinforced by an untested infantry division under General John Hartranft, the Federals quickly rallied, counterattacked and reclaimed Fort Stedman and the adjoining trench lines. Gordon's disheartened butternuts were forced to withdraw, ultimately loosing nearly 4,000 men including over 2,700 as prisoners. Several companies of heavy artillerymen joined in the charge to retake Fort Steadman. Private G. E. McDonald of Company K. captured the battle flag of the 26th Georgia along with the color party and was later awarded a Medal of Honor. Artillerymen are loath to lose their guns and the men of Company K duly recaptured the mortars overrun in the initial Confederate rush. The failure of the attack coupled with irreplaceable losses played on Lee's decision to abandon the Petersburg-Richmond front on April 2 and retreat to Appomattox. Citing the pressing need to remedy his business affairs in New London, Major Cook opted to resign on May 4, 1865 having been present with the regiment almost continuously since May 1861. Thereafter, most of the regiment remained in the vicinity of Richmond charged with collecting Confederate heavy ordnance and munitions until July when it was ordered to Washington. The artillerymen were put to work test firing a new 15-inch gun and retained in the army until the War Department was satisfied that the danger with France on the Rio Grande had subsided. The regiment was finally mustered out on September 25, 1865 and returned to Hartford to much acclaim.

The 1870 Census records George B. Cook as a "Bookkeeper" having a wife and two children. In the 1880 Census he declared himself to be an "Enumerator." At some point afterwards he migrated to San Francisco where he first applied for a Invalid Pension dated May 1892 alleging "permanent disability" from war service. The application was rejected. The former Major Cook died in 1894 in Winsted, Connecticut and was buried in Forest View Cemetery in the same locale.

Accompany the sword are both Military and Pensions records from the National Archives. Also included are voluminous photocopied records from several sources.

The blade is very nice retaining most of the finish with sharp and crisp designs. Handle with nice untouched patina. Scabbard has never been cleaned and in its original untouched state. Overall a very good example of a presentation Civil War sword.