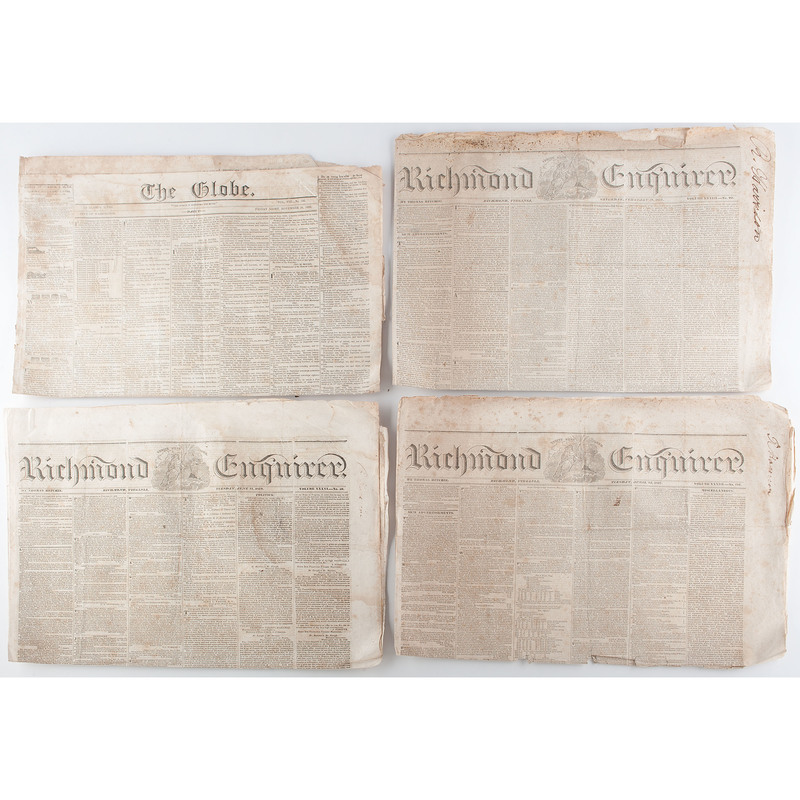 Newspapers Related to the Texas Revolution and Independent Texas, Plus, Lot of 5

Lot of 5 newspapers, with content related to important topics of the nineteenth century, including the Texas Revolution, slavery, the Civil War, and significant political elections.

The Globe. Washington, D.C.: Blair & Rives, November 30, 1838. Vol. 8, No. 146. 4pp, 18.25 x 23.375 in. Inside page articles highlight the financial situation in light of the recent repeal of the Specie Circular and the merits of separating the Bank and the State. Includes Texas content related to the support of former New York Collector of Customs Samuel Swartwout, who openly aided the Texans in their struggle for independence from Mexico. Also with several front page presidential announcements of public land sales in states and territories including Florida, Indiana, Louisiana, Missouri, and Wisconsin.

Richmond Enquirer. Richmond, VA: Thomas Ritchie, February 18, 1837. Vol. 33, No. 92. 4pp, 18.25 x 25 in. Includes intelligence from Texas regarding the formation of a cavalry corps and the alleged mobilization of "a large invading Mexican force," as well as commentary on the correspondence among Andrew Jackson, Sam Houston, and Antonio Lopez de Santa Anna. Also with several notices of reward for runaway slaves, including $500 for the return of "Nelson," described as being of "middling stature, thick set. . . he can use carpenter's tools very well, and can make a tolerably good horse shoe."

Richmond Enquirer. Richmond, VA: Thomas Ritchie, April 25, 1837. Vol. 33, No. 116. 4pp, 18.25 x 25 in. Inside page report that recognition of Texan independence by the United States government was announced "with great joy. . . No obstacle now exists. . . to retard the annexation of Texas to the United States." Another article of note offers analysis of the unfolding Panic of 1837, including tables related to the import and export of specie.

Richmond Enquirer. Richmond, VA: Thomas Ritchie, June 11, 1839. Vol. 36, No. 10. 4pp, 18.25 x 25 in. With front page reporting on relations with Mexico, including exhaustive reproduction of the correspondence between Secretary of State John Forsyth and Francisco Pizarro Martinez, Minister Plenipotentiary of Mexico to the United States, concerning their negotiations of the Convention for the Adjustment of Claims of Citizens of the United States of America upon the Government of the Mexican Republic, an agreement previously signed in Washington, D.C. Additional inside page coverage of important domestic events, such as the appointment of Roger Minott Sherman to Justice of the Superior Court and the growing momentum of the Whig party.

New-York Daily Tribune. New York, NY: Greeley & McElrath, August 1, 1862. Vol 22, No. 6654. 4pp, 15.5 x 20.5 in. Teeming with Civil War content, including front page reports of Confederate ironclad warships on that Yazoo River and in Mobile Harbor and the escape of 35 POWs from Alton Military Prison. Inside pages with articles on reinforcing the Union army through recruitment and draft, including a lengthy letter written by General Joseph Warren Revere, then a colonel, 7th New Jersey Volunteers: "I say, then, fill up the old regiments by drafting, and that immediately, and we shall have the best army that ever took the field." Revere expresses his support for utilizing African American troops and extols the principles of discipline and obedience in soldiers of all races.