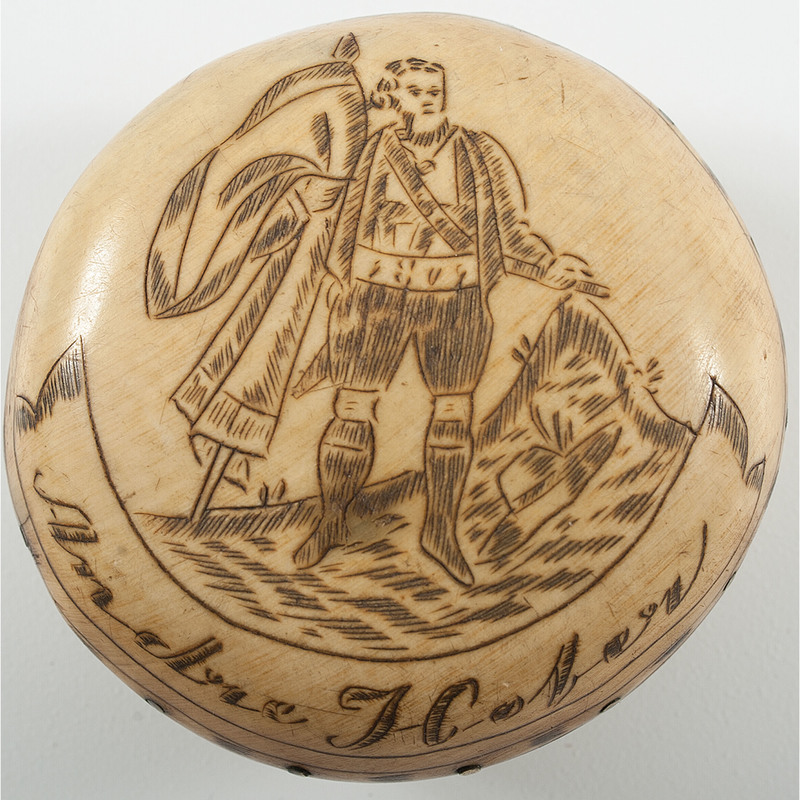 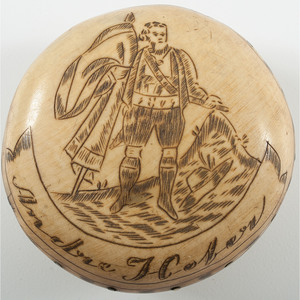 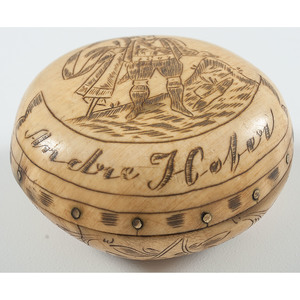 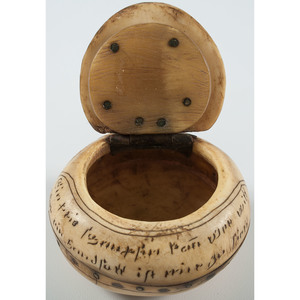 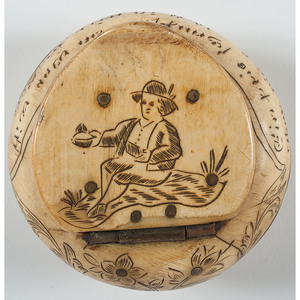 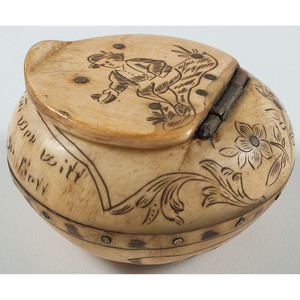 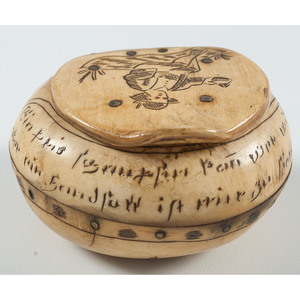 Bone snuff box with scrimshawed designs, 2 in. dia., 1 in. ht. Hinged lid with up-turned tab for opening. A snuff box created as an homage to Andre Hofer, ca 1814, by prisoners captured by Napoleonic Armies' repeated efforts. Hofer, considered by many to be the Tyrolean Patrick Henry, made things very difficult for Napoleon. The box features etched designs of Hofer, in Tyrolean clothing, his name, rendered as Andre Hofer, on a banner below. On the lid is also a man in Tyrolean clothing, holding what appears to be a snuffbox like this one. Around the perimeter are flowers and another banner with a two-line German (Austrian) inscription. We have tried to decipher this, but can only make out some of it: Ein [triss?] _______ sein wen witt (or will? wirt?) / erste ein __r__dsutt ist mir zu nett.

Andreas Hofer was born in 1767 in St. Leonhard in Passeier, the youngest son of six children of Josef and Maria Aigentler Hofer. He attended the typical elementary school, then sent to a school to learn to be a farmer and street trader. He also learned the second language of the Tyrol, Italian. On his return to Passeier he began to manage his father's farm and trade wine and horses, cows, lambs, etc. Later he took over management of his father's inn, Sandhof. He married Anna Ladurner and they had seven children. Hofer was also an officer in the local militia and in 1791 was elected to the local assembly. It was this combination of political experience and some military knowledge that would make him a "natural" leader of the coming rebellion, and his position at the Inn put him in place to communicate with people from far-flung areas and to acquire the news of the day.

After the War of the Third Coalition, part of the Napoleonic Wars, Tyrol was transferred to Bavaria, then an ally of France (led by Napoleon). The Tyrol was supposed to have the same rights it had had before the treaty ending that conflict, but increasingly France made demands on Bavaria, and, of course, Bavaria made demands on Tyroleans. They increased taxes, instituted conscription, while at the same time, the local economy was in decline. Trade dried up, partly as a result of Napoleon's Continental Blockade and any reserves that existed being used for war. Gradually even the institutional framework of the region was reorganized with Bavaria's new constitution. The loss of special status and the reforms introduced, including what was perceived as an attempt to destroy the Catholic church in the Tyrol (midnight Christmas mass was outlawed, convents were closed and sold, bishops expelled).

The people of the Tyrol were incensed (and worried). They became convinced that French /Bavarian tyranny must be resisted. Hofer traveled around the region recruiting rebels - guerillas who could fight a mountain war. The rebellion in their mind was about conservative values - Catholicism, the monarchy (Holy Roman Emperor), and the homeland. He went to Emperor Francis to gain assurances that Austria/Holy Roman Empire would continue to support the Tyrol. Francis promised that he would not sign any peace treaty that gave up the region.

Initially Napoleon was not interested in the region. He reportedly told Berthier: "Let the Austrians do what they will with the Tyrol; under no circumstances do I want to become engaged in a mountain-based war." He was more interested in southern Germany at that point. When the Bavarians invaded on 9 April 1809, Hofer and his militia were ready. Over the next week, Bavarian troops were massacred and driven out, Innsbruck was captured. It wasn't for a couple more weeks, after Bavaria completely lost control of the region, that Napoleon took any interest at all. He sent Lefebvre to take back the Tyrol. There were several more battles, Innsbruck changed hands several times. But ultimately, the Tyrol could not overcome Napoleon's resources - men, ammunition, supplies. The local crops were evenfailing since most men were fighting. French troops defeated the Austrians, and the Tyroleans realized they had been abandoned by Austria. The Treaty of Schonbrunn again ceded the Tyrol to Bavaria.

Initially, the rebels were amnesty, they put down their weapons and returned to their farms. In November, Hofer was led to believe that Austria had won, and when that proved false, he tried to reform his troops, but to no avail. His subordinate commanders surrendered and Hofer went into hiding in the mountains. The French offered 1500 guilders for Hofer's location, and he was given up by a neighbor and compatriot. Hofer was captured by Italian troops of 28 January 1810 and sent to Mantua to face court-martial. The officers in charge initially disagreed on the sentence, until word came, supposedly from Napoleon himself to "give him a fair trial and then shoot him." Hofer was executed on 20 February 1810. He refused a blindfold, refused to kneel, and gave the order to fire himself. Later Napoleon claimed that Hofer was executed against his wishes. The whole affair had the effect of creating a martyr.

Even today, Andreas Hofer is a Tyrolean folk hero. However, he is often seen as a fighter for Tyrolean independence. His most famous quote is: "I will not trade my life for a lie." What most today do not realize is that Hofer (and his supporters) were actually very conservative, not fighting for Tyrolean independence, but anti-Bavarian domination. They were fighting for their religion (Catholicism) and for their Emperor (Habsburg), and thus for the existing social structure, as the dominant values of the rebellion.

For much more information: