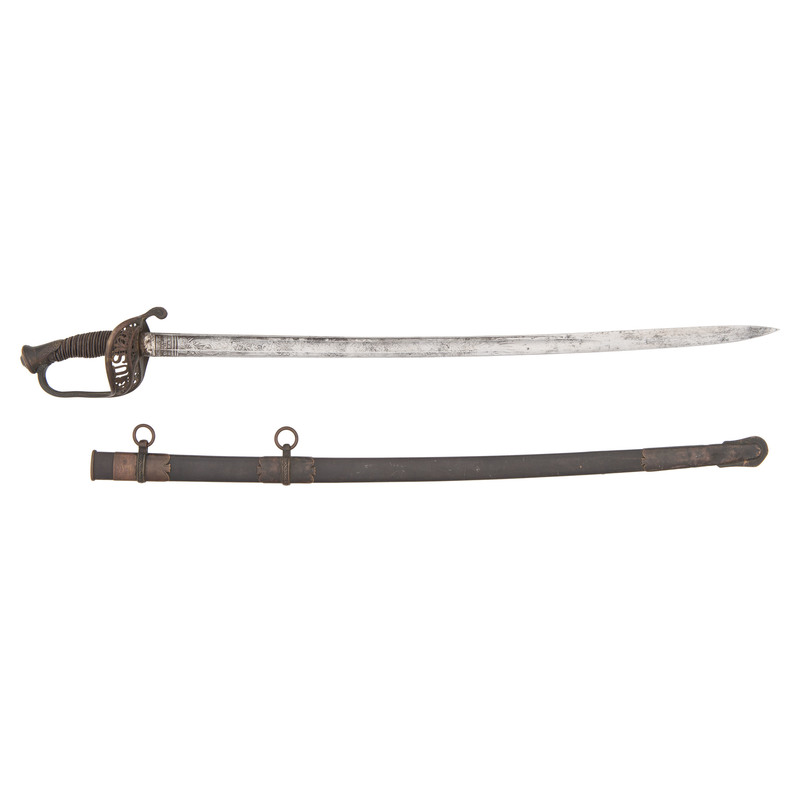 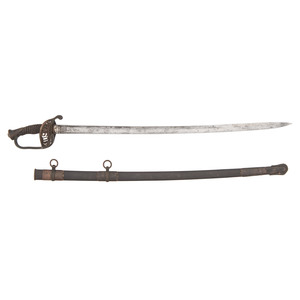 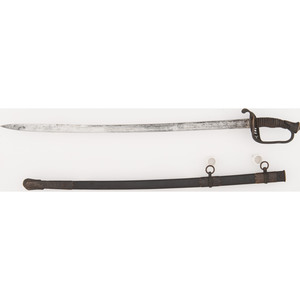 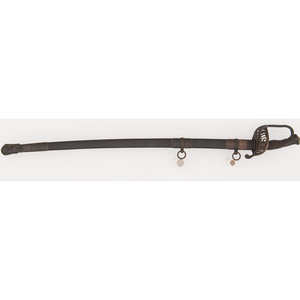 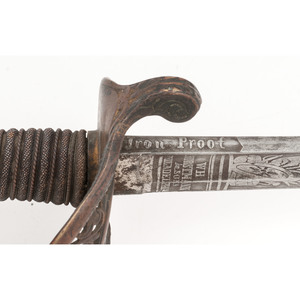 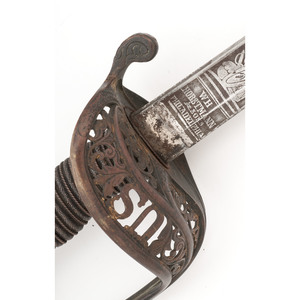 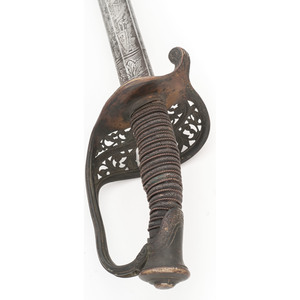 31" blade length etched panels of floral designs and military motifs. Marked on the ricasso Wm Horstman & Sons Philadelphia. Shagreen and brass gilt twisted wire wrapped handle. The pommel is of the Phrygian helmet-shaped.  Branches with floral designs and US. The back of the blade marked Iron Proof.  Metal scabbard with brass bands and carrying rings.  Engraved on the band closet to the throat: "Lt Col Frank Sherman From His Friends Chicago Nov 5th 1861."

Francis Trowbridge Sherman (1825-1905) an early Chicago luminary was, successively, lieutenant colonel, 56th Illinois, a step backwards as major in the 12th Illinois Cavalry, colonel of the 88th Illinois, and brigadier general both by "conspicuous" brevet (not so listed in Hunt) and belatedly by regular commission. This officer compiled an exemplary record during the war leading the 88th Illinois from the front. This particular sword - an early token of esteem from unknown Chicago friends - reflects Lieut. Colonel Sherman's very brief time - three months - with the short-lived first iteration of the 56th Illinois, the "Mechanic Fusiliers." Sherman mustered in Oct. 31, 1861 and mustered out Feb. 5,1862 on specific orders from the War Department when the regiment failed to complete organization. The 56th is not mentioned in his autobiography. A month later on March 8, 1862 Sherman was commissioned in the 12th Illinois Cavalry and evidently joined the regiment in Martinsburg, (W.) Virginia. In his autobiography composed towards the end of his life, Sherman wrote that, "in the later part of March under orders to arrest the female spy, Bell Boyd, I proceeded with a detachment of my battalion...to Front Royal and after successfully making the arrest, returned with her to Martinsburg." Nothing else of note occurred during his short tenure with the 12th Cavalry.

By the summer of 1862 Sherman was back in Chicago being instrumental in raising the 88th Illinois known as the "Second Board of Trade Regiment." On August 27, 1862 Sherman's aspiration for command was realized when he was commissioned colonel of the regiment by Governor Yates. The wear on the drag of the sword would suggest that it was carried by Sherman as his service sword for a considerable time. The 88th immediately entrained for Louisville where it went into camp for several weeks and received arms. Here, it was brigaded with three other regiments to form the 37th Brigade, 11th Division, Army of Ohio. On October 1 the army marched in pursuit of Bragg, the regiment seeing its first action at Perryville on October 8 loosing 5 men killed or mortally wounded, and 56 wounded. The pursued Bragg to the Cumberland Gap. Before Nashville the army was reorganized with William Rosecrans as commander. In November 1862 the men were brigaded in the 1st Brigade, 2nd Division, 20th Army Corps and fought the battle of Stones' River in which casualties were heavy - 23 killed and wounded with 15 prisoners. Following the battle the regiment remained relatively inactive for the next several months encamped at Murfreesboro where Sherman took temporary command of the brigade. The Federal army then trod off for several months hard marching during the Tullahoma Campaign which leveraged Bragg out of Middle Tennessee and threatened Chattanooga. As a consequence two armies met on the field at Chickamauga, Sept. 19-20 sustaining 17 killed and wounded and 8 prisoners mostly on the chaotic day two. The regiment then joined the 4th Corps and was at the point during the siege of Chattanooga and the battle of Missionary Ridge 'above the clouds' losing 5 killed and 12 wounded on November 25 and being the first to plant the flag on the enemy's works.  The tempo of the fighting abated somewhat as the federals prepared for the Atlanta Campaign. With little respite Sherman's brigade marched to the relief of Knoxville in March 1864 to raise the siege by Longstreet's Corps.

Col. Sherman later recalled in his autobiography, "The following Spring, still in command of the brigade, I moved out with the combined armies under General Sherman on the Atlanta Campaign. We engaged daily in all of the series of skirmishes, combats, and demi-battles, which marked the progress of Sherman's Army though Georgia. I was relieved from command of my brigade and transferred to headquarters of the 4th Army Corps, General Howard's command, as Chief of Staff."  Sherman was serving on Howard's staff when he was captured on July 7, 1864, on the banks of the Chattahoochee River roughly seven miles north of Atlanta. After being taken to General Johnston's headquarters, Sherman was confined in Atlanta "for a short time" before being taken to the Confederate officer-prison at Macon. There, wrote Sherman, "I found sixteen hundred officers, regular and volunteers, ranking from 2nd lieutenant to colonel". The sparse and brutal nature of the Confederate military prison system was described by Sherman, "The stockade, which enclosed about two and a half acres of ground had an old building inside which was the only shelter furnished by the rebel authorities, except for a few shanties erected by the prisoners out of refuse graciously permitted the damned Yankees, without proper shelter from the climate, no blankets, poor water, inefficient food and no chance for bathing and cleanliness. Could there be any questions of the hospitality of the chivalrous Southerner; of his humanity?" Sherman's autobiography glosses over much of the fighting he experienced while a disproportionate number of pages are dedicated to this time a prisoner. The officer prisoners were herded on to boxcars in late August and shipped to Charleston. Sherman wrote of a harrowing attempt to escape, during the passage "...some of us tried to escape by jumping from the train at night, while it was in motion. At the end of fort-eight hours, after being run down by a pack of bloodhounds and treed, I was recaptured" as were all of the others. Once in Charleston the prisoners were routinely subjected to the friendly fire of celebrated "Swamp Angel' gun then bombarding Charleston. With decidedly better treatment in Charleston, Sherman was notified that he had been "especially exchanged" and was forwarded to Libby Prison in Richmond and was held here two weeks before the matter could be effected. Due to the harshness of prison life Sherman returned home to Chicago to recuperate and await orders.

In December, Colonel Sherman was assigned to the staff of General Sheridan as Instructor General, Middle Military Division at Winchester and served in this capacity until the end of the war. Sherman wrote that "it was my fortune to witness and take part as a staff officer of the Cavalry Corps in a series of engagements which took place between the Army of the Potomac...that preceded the surrender of Lee," also to witness General Lee's surrender of Lee's and his surrender to General Grant. On March 13, 1865 Sherman was brevetted brigadier general and carried dispatches to Washington together with fifty battle flags and the men who captured them. Sherman then rejoined Sheridan until Johnson's Army surrendered. After participating in the Grand March General Sheridan kept Sherman on his staff as he was reassigned the peacetime duty in the Military Division of the Gulf as Provost Marshal. On duty here he received a regular star to brigadier general on July 21, 1865. General Sherman was not mustered out of volunteer service until Jan. 15, 1866.

Sherman did not immediately return home to Chicago. He tried his luck at running a sugar plantation ten miles up the coat from New Orleans. He recalled that "I devoted one year and $25,000 to this sweet business, then threw up the sponge and returned to Chicago. He was appointed Postmaster of Chicago in 1867. This was followed by a single term in the Illinois Legislature in 1873. Thereafter, Sherman engaged in manufacturing having suffered ruin a second time in the Great Chicago Fire of 1871. Frances Trowbridge Sherman died on November 9, 1905 and was buried in Chicago's famous Graceland Cemetery.

In his post war autobiography written in 1899 Sherman dedicates that last third of the short book to the Battle of Missionary Ridge. The autobiography numbers 46 typed pages bound under leather boards and gilded title. Also accompanying the sword is his printed MOLLUS obituary as well as numerous post-war letters dealing with the decades spent in manufacturing. A fine, presumably war used, brass telescope rounds out the group.

This sword has never been cleaned and displays a nice untouched patina. The guard has a little dent in it probably occur doing its period of use. Overall this is a very good example of a Civil War presentation sword.