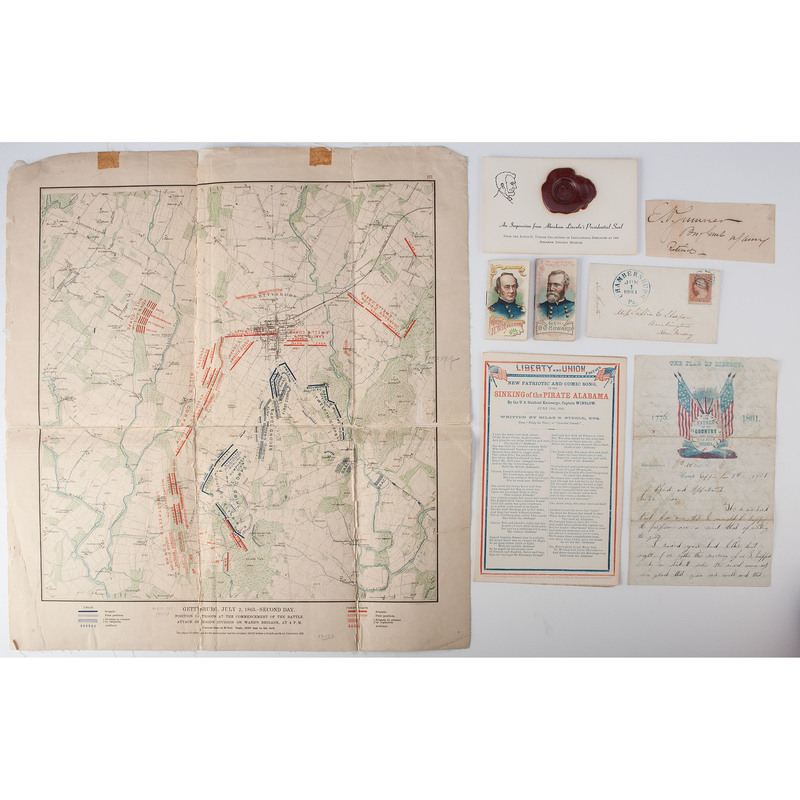 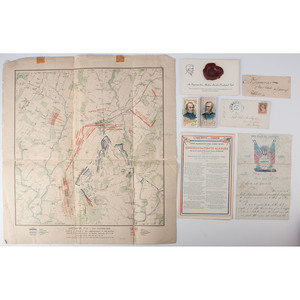 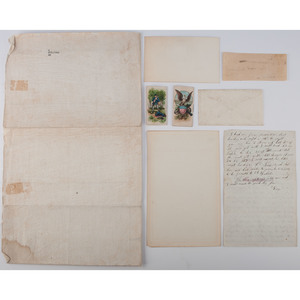 Converse, Julius (1798-1885). 34th Governor of Vermont. ALS, 1p, 7.5 x 10.5 in., Woodstock, VT. August 27, 1873. Addressed to Union Major General James S. Negley. Converse expresses his gratefulness to General Negley for inviting him to his city, along with his hopefulness that previous engagements do not prevent him from accepting. Letter written on "State of Vermont / Executive Chamber" stationery.

ALS by "Jasper," likely of the 3rd Vermont Regiment, Company "E," 4pp, 5 x 8 in., "Camp Griffin." Dated November 7, 1861. Addressed to his "Kind and Affectionate Sister Jade." Letter written on patriotic "The Flag of Liberty" stationery. Letter contains typical family correspondence content including references to Biblical verses, expressed happiness with receiving word from home and desire to receive more, etc. "Jasper" also promises to send his sister a photograph of himself once he receives her ambrotype.

Patriotic imprint, 5 x 8 in., featuring lyrics of the song, "Sinking of the Pirate Alabama," written by Silas S. Steele, Esq. Copyrighted 1864 by J. Magee, Philadelphia, PA. Pamphlet markets the tune as a "New Patriotic and Comic Song," sang to the tune of "Teddy the Tiler," or "Cannibal Islands."

Battle map of Gettysburg by Julius Bien & Co., 16.25 x 17.5 in., "Gettysburg, July 2, 1863.-Second Day. / Position of Troops at the commencement of the Battle. / Attack of Hood's Division on Ward's Brigade, at 4 P. M." Showing Union positions in navy blue and Confederate positions in red. Paper map affixed to fabric backing, with separations in paper along numerous creases, fraying at edges, and spots of adhesive residue at top. Stamped with collection/item number on verso.

Items in lot with varying degrees of wear, most if not all including greater or lesser degrees of soiling, discoloration, and minor rips/tears. See high-res photographs.