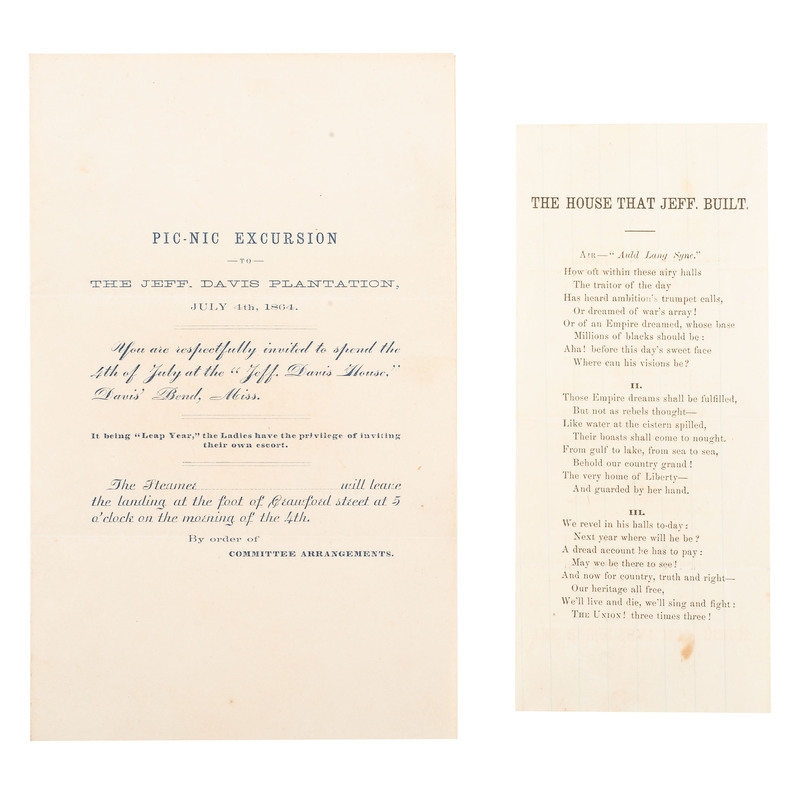 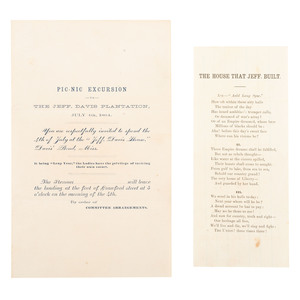 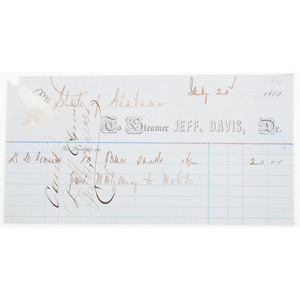 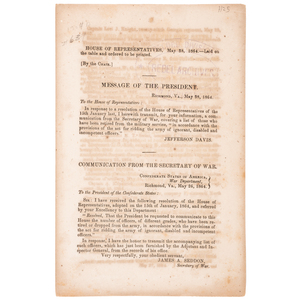 Lot of 4. Seddon, James A. Secretary of War. Pamphlet, House of Representatives [CSA], May 28, 1864. - Laid on the table and ordered to be printed. Communication from the Secretary of War. With "Message of the President." Communicating "...the number of officers, of different grades, who have been retired or dripped from the army, in accordance with the provisions of the act for ridding the army of ignorant, disabled and incompetent officers." [Bill adopted January 15, 1864] 8vo, no covers, 3pp. With list of 24 officers now gone from service.

Bill of Lading, State of Alabama, January 20, 1862. Partially printed billhead of Steamer Jeff. Davis. 4.25 x 8 in. for 10 sacks from Montgomery to Mobile. There were a number of vessels named Jeff(erson) Davis - steamers, brigs, sloops.

Invitation, unused, 5 x 8 in. Pic-nic Excursion to the Jeff. Davis Plantation, July 4th, 1864, "...to spend the 4th of July at the 'Jeff. Davis House,' Davis' Bend, Miss. It being 'Leap Year,' the Ladies have the privilege of inviting their own escort." It goes on to give time and place of departure. Not filled out to anyone.

Song lyrics "The House that Jeff. Built." Printed sideways on lined paper (i.e. the lines are vertical), 3 x 6.75 in. Three stanzas, to be sung to "Auld Lang Syne." Including such sentiments as:

"...Those Empire dreams shall be fulfilled,
But not as rebels thought -
Like water at the cistern spilled,
Their boasts shall come to nought....

And now for country, truth and right -
Our heritage all free,
We'll live and die, we'll sing and fight;
THE UNION! tree times three!"

First with darkened areas from printing. Minor toning along edges. Upper left corner with tear on bill of lading, appears to be where it was attached to another sheet at some time. A couple of minor stains on lyrics.