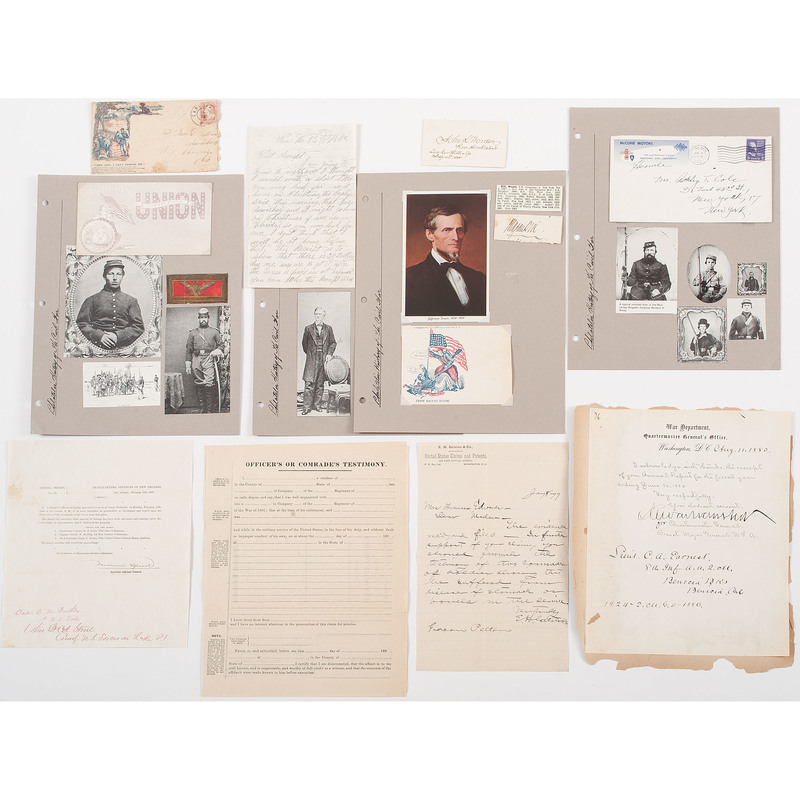 ALS, Nov. 13, 1862, n.p. 3-page soldier's letter, to a wife, sister, or mother. Regarding a furlough at Christmas and IOU for $30. With patriotic cover of "The Girl I Left Behind Me" - one of the more elaborate covers, with red-white-blue illustration, four-line poem below title. This is likely Harrison H. Wallburn [sic, Walburn], who enlisted in the 113th Ohio Vol. Infy. in August 1862.

Special Orders No.42, New Orleans, Feb. 10, 1865. Board of Officers appointed to investigate the destruction of revetment of the levees near Camp Chalmette. Signed by Frederick Speed, AAG to Brig. Gen. Sherman. Speed enlisted in the 5th Maine, transferred to Field & Staff of the 13th Maine, then was commissioned into US Volunteer Adjutant Genl. Department about nine months after that.

Autographed calling card, signed "John L. Worden, Rear Adml. USN, Tucker Hill, NY, July 4th, 1888." John Lorimer Worden (1818-1897) was the commander of the USS Monitor during the Civil War. He challenged the Confederate monitor Virginia at Hampton Roads, VA (9 Mar 1862). Built as an ironclad using parts, including the engines, of the steamer USS Merrimack, the CSS Virginia attacked the blockading Union fleet at Hampton Roads. The following day, the USS Monitor, having been rushed to the region in hopes of defending the wooden Union fleet, although she was not quite complete and the first battle between ironclads began. After 4 hours of steady firing, the ironclads retreated, each unable to puncture the other's armor plate. Cowan's sold Worden's swords in May 2018.

ALS, Washington (DC): 8 Jan. 1897. To Mrs. Frances Edwards, signed E.H. Gelston, telling her that she should "furnish the testimony of two comrades of [the] soldier showing that he suffered from disease... in the service," and enclosing two blank forms for this testimony (unused). On letterhead of "E.H. Gelston & Co., Solicitors of United States Claims and Patents."

Clipped signature of Morgan Dix, Episcopal priest, theologian and author. From 1855 until his death he was associated with Trinity Church in New York. Dix was the son of Maj. Genl. John Dix, Civil War general.

Two Civil War patriotic envelopes, one with a soldier in Zouave uniform skewering a figure representing Jeff Davis with the flag pole (American flag flying). The cartoon is entitled "Jeff Davis' Doom." The second is from the "Loyal States" series, this one for Connecticut, with the state seal lower left.