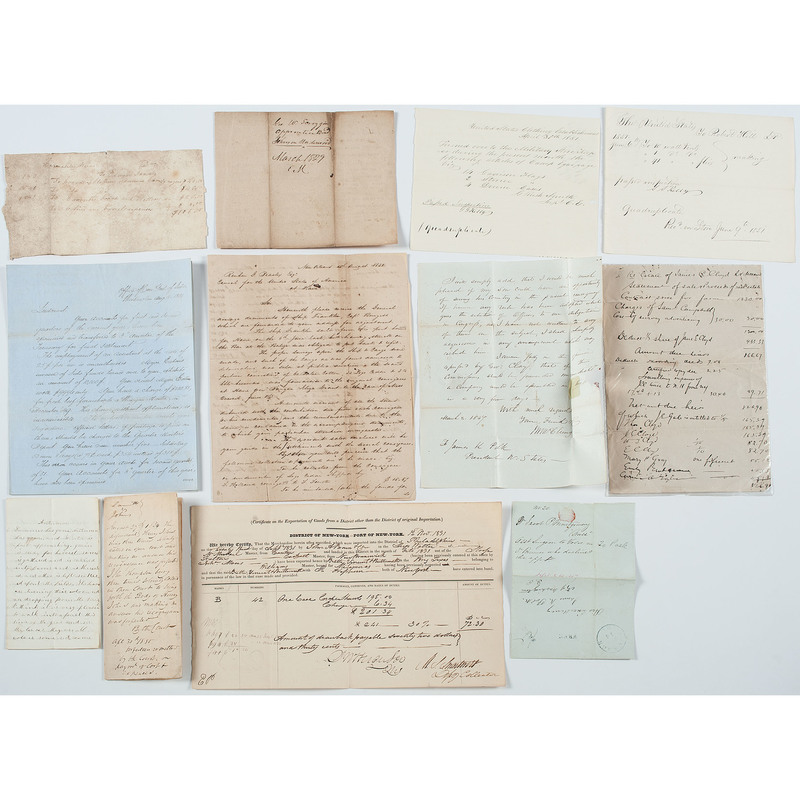 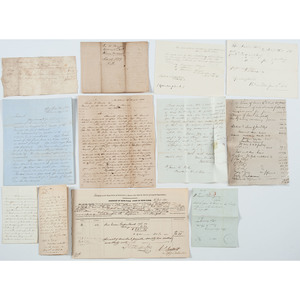 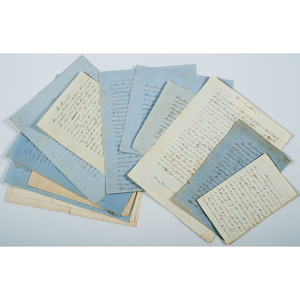 Partially printed DS, Port of New York, "Certificate of Exportation of Goods from a District other than the District of original Importation."  23 Sept 1831. Signed by Samuel Swartwout as Depty. Collector. Swartwout (1783-1856) and his brothers became allies of Aaron Burr and were arrested with other Burr allies for misprision of treason. He and the others arrested with him were released, but he was a key witness at Burr's trial in Richmond. Swartwout served as captain of a light infantry corps during the War of 1812 and around this time became associated with Andrew Jackson. When Jackson became President, Swartwout was appointed to the post of collector of customs at New York, one of the most influential positions, since this was a major source of funding for the still-young nation. After he left office, someone (possibly his successor) doctored some documents to make it appear Swartwout has embezzeled over a million dollars and fled to England. He claims he went to England to look after some economic interests he had there (coal). Swartwout claimed innocence. He is also known for his support of the Texas revolution. He sent provisions to Texas and repaired the two-ship navy at his own expense. Swartwout, Texas (now a ghosttown) was named in honor of his support.

ADS, 3pp, New Orleans, 15 Aug. 1838. Addressed to Reuben Peasley, Consul for the United States of America at Havre. Accounting of the cargo of Ship Franklin. "The Ship Franklin sail'd from this port bound for Havre on the 6th June last, but having struck on the bar at the Balize was obliged to put back & refit. The proper surveys upon the ship & cargo were made, and such of the cargo as was found damaged & deteriorating was sold at public auction & the sound portion consisting of 60 bales Cotton, 33 logs Cedar & 3 1/2 bbls beeswax, was forwarded to the original consigners at Havre per Barque Eliza Grant to the care of Mess. Quesnet, freres & Co." He goes on to give a detailed accounting of all consignors' losses, etc. Last page with stamp of US Consulate at Havre and statement certifying that the information is a true copy of the original letter sent to them.Receipt for wall tents and flies, Robert Hill. Note that they passed inspection, signed by S.S. Kelly. June 1851. No place noted.

ALS, 1+pp. Office  of Com. Genl.of Subsistence, Washington, Aug. 11, 1851. To Lieut. W.E. Jones, Mounted Rifles, Jefferson Barracks, MO. Informing Jones that he has unauthorized expenses on his first and second quarter accounts. The last sentence is a bit ominous - "Your accounts for 3d quarter of this year have also been examined."

ALS, 1p, n.p., 2 March 1847. Addressed to President James K. Polk by M (?) McClung requesting a position for his son, Charles, to serve his country. Notes on verso suggest he might be offered a Lieutenancy.

Partially printed apprentice bond, approx. 7.5 x 12 in. Made 23 March 1829, between Wm. Steele on behalf of Johnson Underwood, an orphan, and Geo. W. Scroggons. Johnson Underwood was to train as a tailor until the age of 21, and Mr. Scroggons was to provide lodging, food, clothes, etc., also the youngster was "to be taught to read, and write, and cypher...and at the end of his apprentiship, to pay the said apprentice a fare & complete set of tools and a good suit of cloth[e]s." Signed by Steele and Scroggons.

AD, 1p, 7 x 10 in. "Statement of sale & Proceeds of real estate" in the estate of James C. Cloyd, Sr. Listing all the income, expenses, as well as amounts paid to heirs.

ADS, 1p, 7.75 x 12.5 in. 28 June 1834, Gettysburg, PA. Seems to be a bond agreement in an adultery case. "Henry Johns & John Thompson,...acknowledge themselves indebted & to owe to the Commonwealth of Penna. the sum of Five Hundred Dollars each, to be levied of their goods & chattels, lands & tenements....upon the condition that if the said Henry Johns shall personally appear at the next court of Quarter Session of the peace to be held at Gettysburg for the County of Adams, then & there to answer such matters & things as shall be objected to him in behalf of the commonwealth for adultery with a certain lady Ann Gilbert..."

Group of 17 school compositions, poems and essays, 1847-1859. Over half are by Thirza Russell (with variations on spelling) (Albany), with a few by Mary Ethel (Conway) and a few others. For example, one written in 1855 by Miss Russell (with her name written backwards - Azriht Lessur) begins: "How wonderful are the works of Nature. It is impossible for pen to discribe the curiosities among the works of Nature. Every thing seems to be praising their Creator..."