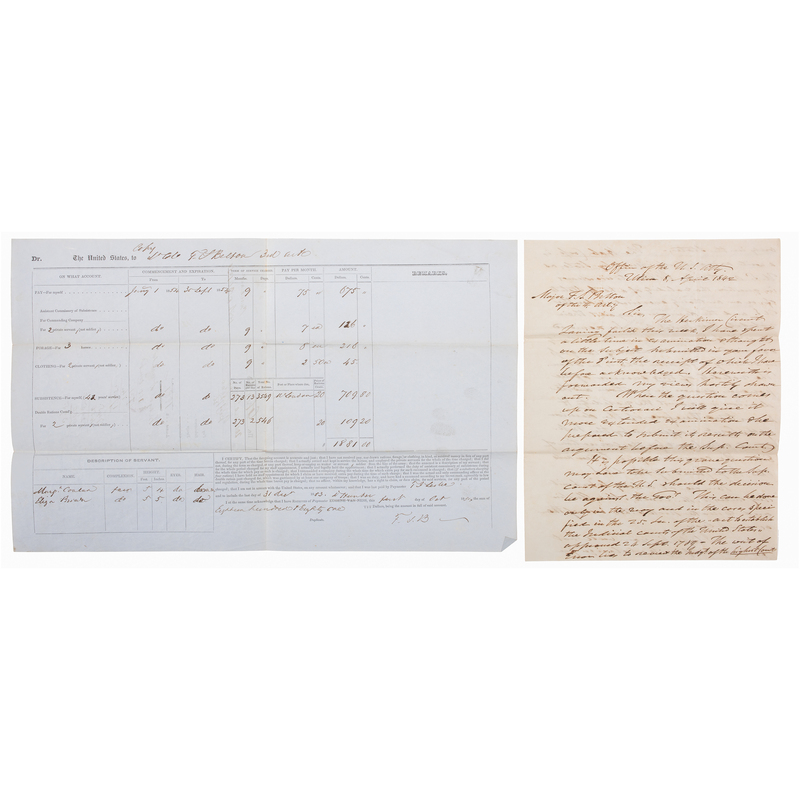 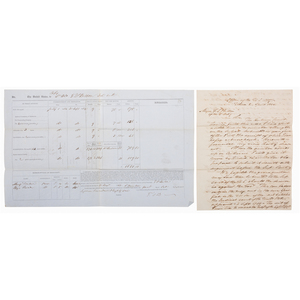 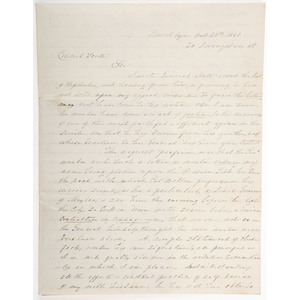 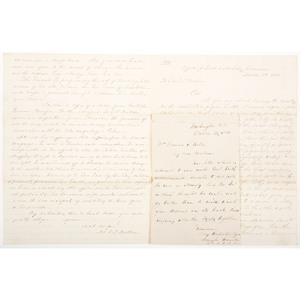 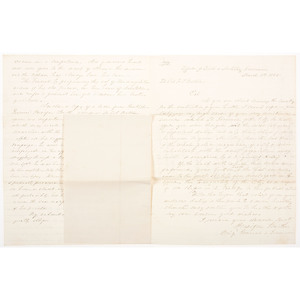 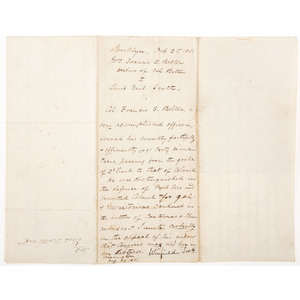 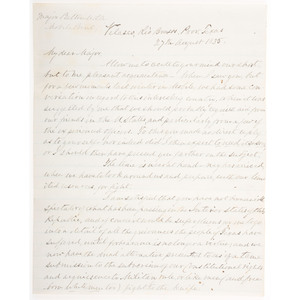 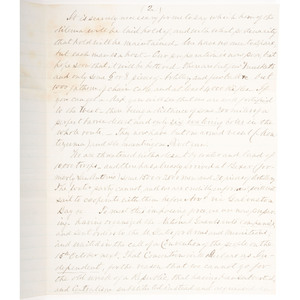 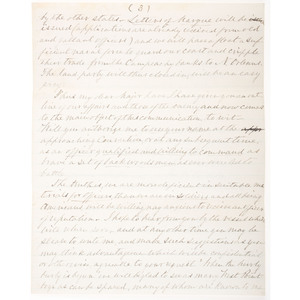 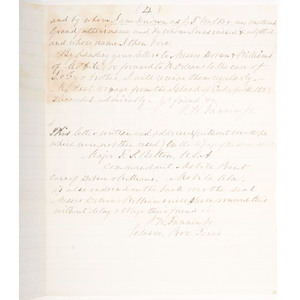 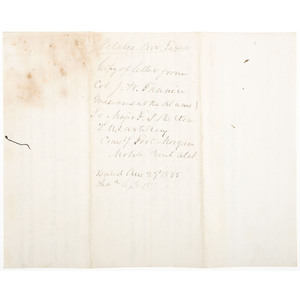 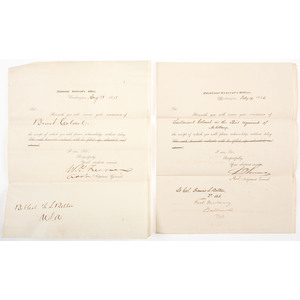 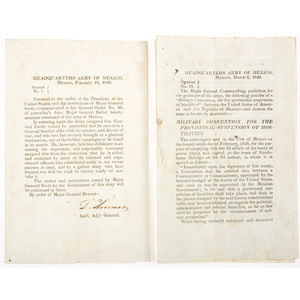 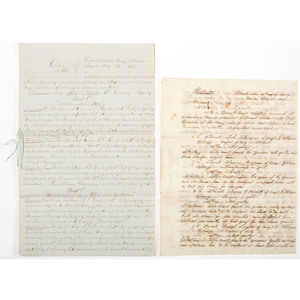 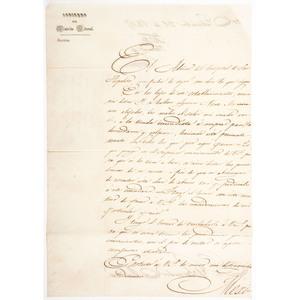 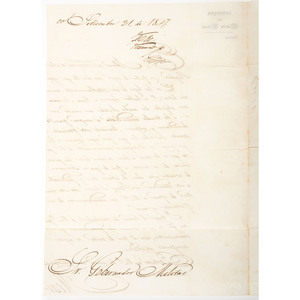 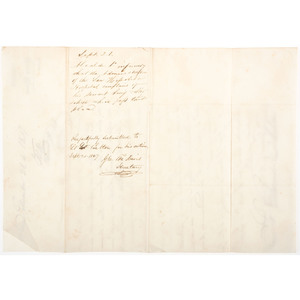 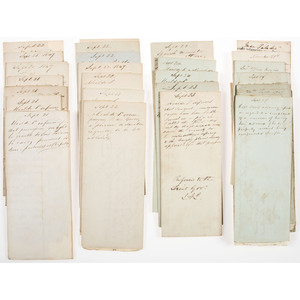 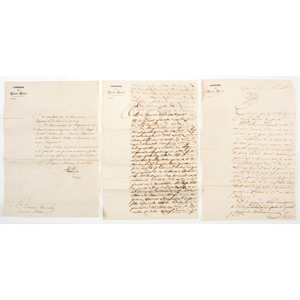 Though lesser known than some of his contemporaries, Francis Smith Belton had a successful military career that afforded him close contact with many of the leading military and political figures of his generation. Born in Baltimore, Belton was commissioned as a 2nd lieutenant of the First Light Dragoons at age twenty and two years later in 1814 he distinguished himself at the defense of Fort Erie during the War of 1812. Apparently possessed of a fiery spirit, Belton survived two court martials and continued to rise within the military ranks. He served on the staffs of numerous generals during the 1820s, was appointed Commander of Fort Morgan (Mobile, AL) in 1834, then was appointed Commander of Fort Brooke (Tampa, FL) in 1836 during the Second Seminole War. During the Mexican-American War, Belton was brevetted colonel "for gallant and meritorious conduct in the battles of Contreras and Churubusco." Belton was later appointed by General Winfield Scott as lieutenant governor of Mexico City during the US occupation. After the Mexican-American War, Belton served as commander at Fort Trumbull (CT) and was commissioned as colonel in the 4th Artillery Regiment. He died in Brooklyn, NY in 1861.

The bulk of the archive relates to the military occupation of Mexico City. Acting as lieutenant governor of Mexico City, Belton had significant responsibilities for the administration of the city. According to a March 1848 copy letter written by Brigadier General and Military Governor Persifor Smith to Colonel Belton, Belton was "charged with the most laborious & important duties, not only those which properly belonged to your military character but those of the whole police magistracy of a city of 180,000 inhabitants...." Thirty-one documents offered here, most of which are in Spanish with handwritten notations on verso in English, reflect these responsibilities and present a fascinating glimpse into the military occupation of the city. Most of the documents date to the weeks and months just after the occupation, September - December 1847, and deal with issues such as property disputes, war dead, prisoners, and acts of violence and other illegal activity perpetrated by American soldiers. Often indicating "Referred to the Lieut. Gov." or similar notation, the letters include one from Spanish Minister R. Lozano de Armenta signed and dated September 22, 1847, with period notation on verso providing English translation,"Spanish Minister informing that the establishment of a French subject had been assaulted & part of the property robbed by a party of Americans." Other documents include a Sept 21 request that "permission might be granted to Luis Paramo to carry provisions to some prisoners at Chapultec"; a letter of Sept 21 from the minister of the Evangelio Province "informs that the Burying Ground of Santiago was at the disposal of the Amrs. to bury Catholics & not Protestants according to their Law"; and a letter of Nov 28 indicating that "Ignacio Esteves complaining that John Murphy A.C. 2 Arty refused to pay his work...."

Additional documents related to the Mexican-American War include: printed copies of Butler's Orders #1 and #18, both signed by Asst. Adj. General Lorenzo Thomas, with #18 being the important "Military Convention for the Provisional Suspension of Hostilities"; handwritten copies of Butler's orders #8, #94, and #105 all issued from "Head Quarters, Army of Mexico" dated February 22, 1848, May 16, 1848, and May 24, 1848, respectively, and detailing court martial proceedings; and an ornately printed 2pp announcement of a benefit given by the US Army in honor of "Senora Canete, The First Actress of the Spanish Company" at the National Theatre in Mexico City, with handwritten pencil notation "Janry 48." Two military commissions are included in the archive, one dated February 19, 1846, signed by AAG Lorenzo Thomas and commissioning Belton "Lieutenant Colonel in the Third regiment of Artillery." Another dated August 31, 1848, signed by AAG W.G. Freeman, commissioning Belton "Brevet Colonel" for distinguished service during the Mexican-American War.

Prior to his service in Mexico, Belton received a historic request for assistance from James Walker Fannin, a leader of the Texas Revolution who was killed in the Goliad Massacre. In a letter dated August 27, 1835, Fannin requests Belton's permission to suggest his name as a candidate for a command position with the Texian Army: "Will you authorize me to use your name...as an officer qualified & willing to command as brave a set of backwoodsmen as ever were led to battle?" At the time Fannin made this request, Belton was commandant at Mobile Point in Alabama. A copy of Fannin's letter, created by an unknown hand at a later date, accompanies the archive.

Other documents in the collection also represent Belton's military career beyond the Mexican War as well as his personal life, including: 1830s Treasury Department documents written to Belton while he served at various forts; a letter written by Belton's son, Winfield Scott Belton (later Joseph Francis Belton), while at West Point; a partial letter dated January 1841 written to President Elect William Henry Harrison by officers of the US Army on behalf of George McDougall, first keeper of the Fort Gratiot (MI) lighthouse; Belton's will; documents related to Belton's death and his wife's efforts to secure a widow's pension, including an October 30, 1861, document signed "Winfield Scott" by Belton's lifelong friend attesting to Colonel Belton's distinguished service; later documents detailing Belton's military record and court martials, and more.