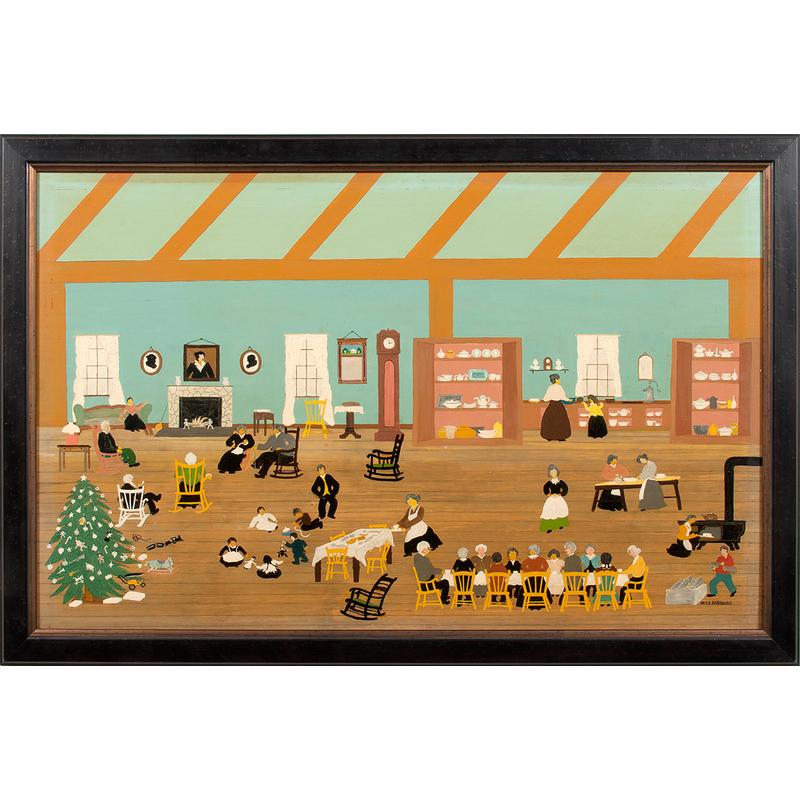 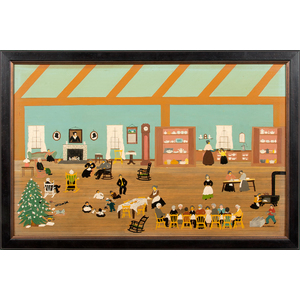 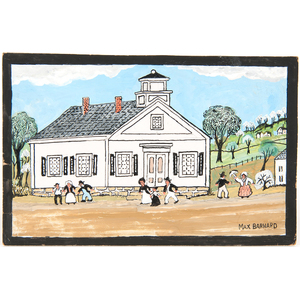 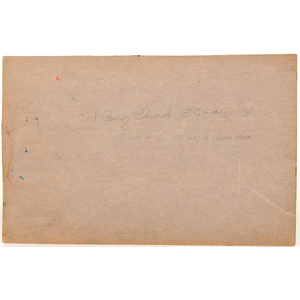 American, Chagrin Falls, Ohio, early 20th century. A group of two paintings by Max Barnard, including one oil on board, genre scene of the interior of a home at Christmastime; and one oil on cardboard, genre scene of a First Congregational Church in Chagrin Falls. Each signed l.r., and church scene has written in pencil on verso Old Cong. Church - E. Orange St., N side of St. next (west) of Lutheran church; (Christmas scene) 35.25 x 22.5 in. (sight), 39 x 26 in. (frame).

This group also includes The Drawings of Max Barnard, edited by Serapio R. Zalba (Chagrin Falls, OH: Chagrin Falls Historical Society Press, 2007).
Max Barnard started at an early age as a house painter and paperhanger in Chagrin Falls. Although not formally trained, he took up painting in the 1940s and came to be recognized for his primitive paintings of scenes recalled from his childhood, which earned him the nickname of the "Grandpa Moses" of Chagrin Falls Township. Barnard won first prize at the May Show of 1954, exhibited at the Chagrin Valley Art Club in 1973, and at the Heartland Museum in Harvard, MA in 1986. Quite a prolific artist, he completed more than 2,000 works in a span of nearly 30 years. Barnard died in Millersburg, Ohio, and is buried in Chagrin Falls.
The First Congregational Church was built in 1846, and it was located at 59 E. Orange St. in Chagrin Falls. The church later merged with the Bible Christians in 1884, and the Disciples of Christ in 1929, and relocated to what is now called the Federated Church of Christ at 76 Bell St., Chagrin Falls.
"Barnard, Maxwell ("Max") Vosper," Encyclopedia of Cleveland History, http://ech.case.edu/cgi/article.pl?id=BMV.
"The First Congregational Church and Parsonage," Chagrin Valley Today, June 1, 2015, http://chagrinvalleytoday.com.

Provenance:From the Estate of Tim Martien

Christmas scene has light grime cover, and mark around border that appears to be from an earlier framing. Church scene has some paint loss around borders, and cardboard is slightly warped at l.r., and cardboard shows signs of creasing/bending on left side, which also left hairline cracks in paint.
For condition inquiries please contact cleveland@cowans.com.
Please note that a condition report is only an opinion, given as a courtesy, and should not be treated as a statement of fact. Cowan's Auctions shall have no responsibility for any error or omission.
Estimate: $300 - $500
Price Realized Including Buyer's Premium
$180
09/17/2016