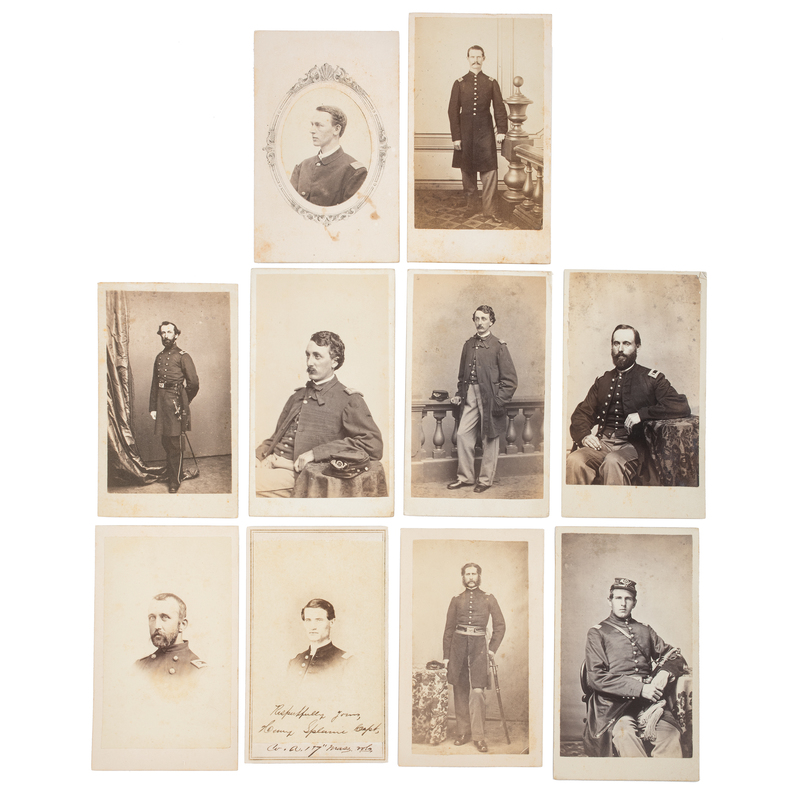 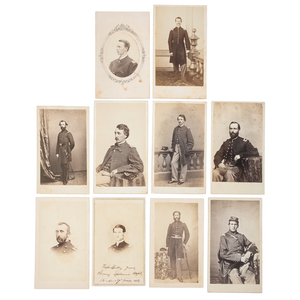 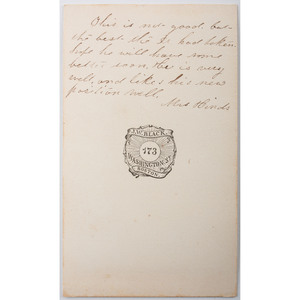 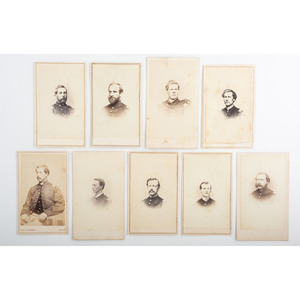 Leather album, 4.75 x 6.25 in., containing 37 CDVs, of which 21 are images of Union officers, most unidentified. The rest show men, women, and children. Many of the cartes are credited to Massachusetts photographers, including J.W. Black, Case & Getchell, O. Seaver Jr., Higgins & Co., and S. Masury of Boston, L.D. Judkins of Haverhill, and W.A. Elwell of Gloucester. Three bear the backmark of Stayner & Smith, New Bern, NC.

The album features two identified subjects, Henry Splaine and William Henry Weed Hinds, who both served with the 17th Massachusetts Regiment, suggesting that the remaining soldiers pictured in the album also served with the 17th. The vignetted view of Splaine is autographed below the portrait, and includes his rank as captain, with backmark of Stayner & Smith, New Bern. A shoemaker by trade, Splaine enlisted as a 1st lieutenant 7/61 and was commissioned into Co. E, 17th MA the following month. He rose in the ranks to captain 1/62, major 8/64, lieutenant colonel 8/64, and colonel 6/65, and was mustered out 7/65 at Greensboro, NC. The portrait of Hinds is credited to J.W. Black and is inscribed on verso by "Mrs. Hinds," noting that the likeness "is not good, but the best that he had taken..." Hinds was a Boston resident and physician before enlisting as an assistant surgeon 7/61 and being commissioned into Field & Staff of the 17th MA. He was discharged for promotion to surgeon 5/63 and was commissioned into F & S of the 12th MA on 7/63 before mustering out a year later at Boston.

The 17th Massachusetts was organized at Camp Schouler in Lynnfield, MA, mustering in for a three-year enlistment on 7/22/61 under the command of Colonel Thomas J.C. Amory. The 17th MA saw action at the Battle of New Bern, the Carolinas Campaign, and Battle of Wyse Fork, before mustering out on 7/11/65 at Greensboro, NC. It lost a total of 172 men during service; 21 enlisted men killed or mortally wounded, 4 officers and 147 enlisted men died of disease.