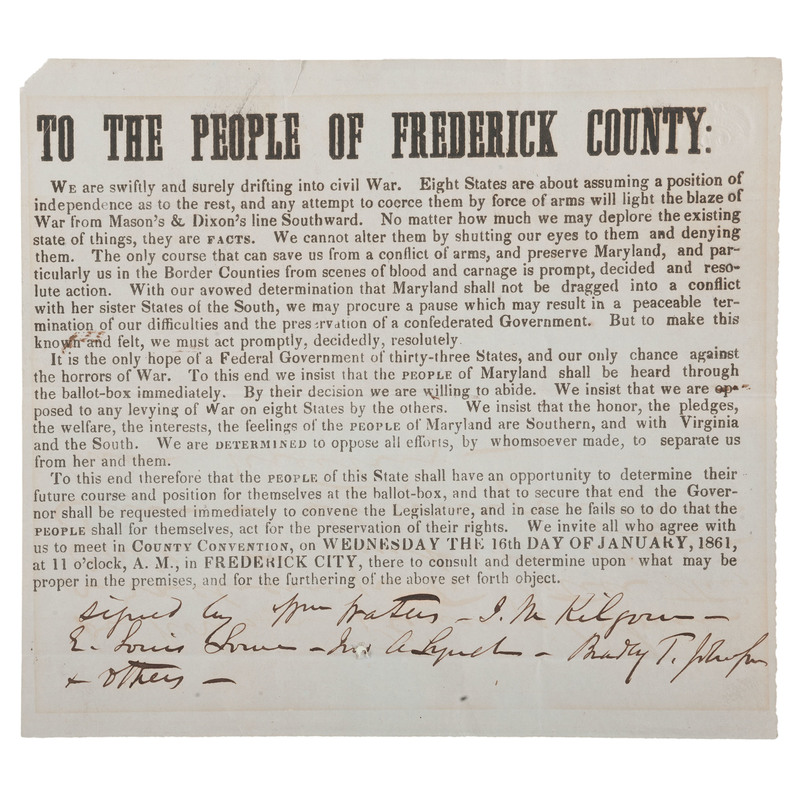 Printed broadside, 7.25 x 6.5 in., To the People of Frederick County. N.d., ca 1861. Broadside features "London" seal embossed at upper right corner. Text below title warns Maryland citizens of the impending Civil War, explaining that the only way forward is to "act promptly, decidedly, resolutely." The broadside then insists that the people of Maryland vote to "determine their future course and position..." Readers are persuaded against taking up arms against the southern states, as broadside proclaims, "the honor, the pledges, the welfare, the interests, the feeling of the People of Maryland are Southern, and with Virginia and the South." It continues by asserting, "We are Determined to oppose all efforts, by whomsoever made, to separate us from her and them." The Maryland residents "who agree with us" are then invited to Frederick City on January 16, 1861 for a chance to determine the next steps for the state regarding the approaching war.

Bradley Tyler Johnson (1829-1903) was involved in both the political and military aspects of the Civil War, serving as a delegate to the National Democratic Convention at Baltimore in 1860 where he and many from his delegation pulled out of the convention and joined with the southern wing of their party, supporting John C. Breckinridge and Joseph Lane as nominees for President and Vice President. Once the war broke out, Johnson contributed to the forming of the 1st Maryland Infantry CSA, and served as a major and, later, a colonel within that regiment. He was involved in the notable May 1862 Battle of Front Royal, in which the 1st Maryland regiments from both Union and Confederate Armies fought against each other. It was prior to this battle that Johnson heroically rallied his men, many of whom were discontented over delayed discharges, with a powerful speech invoking honor, loyalty, and the glory of Maryland. Johnson and the 1st Maryland also fought at the First Battle of Winchester and the Battle of Cross Keys. Johnson himself was at the Seven Days Battles, part of the Peninsula Campaign, numerous major battles near Richmond between June and July of 1862, and was eventually promoted to brigadier general of cavalry on June 28, 1864.

Broadside with square discoloration pattern around edges and ink residue faintly visible throughout (perhaps from another document stored with this one). Brittleness at edges, with small area of paper loss at upper left corner.