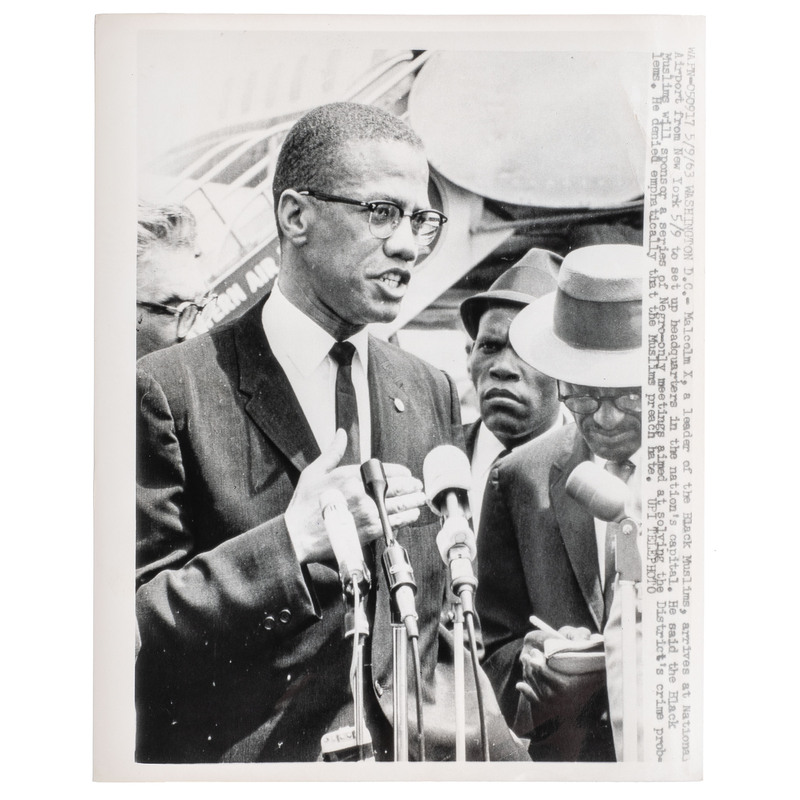 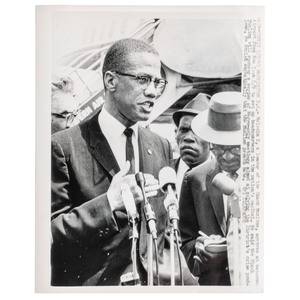 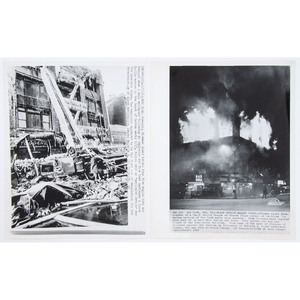 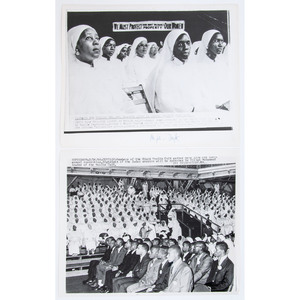 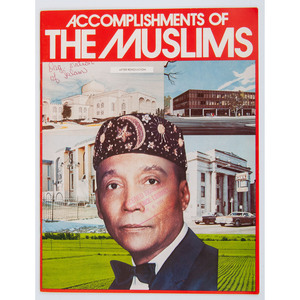 An outdoor portrait of Malcolm X speaking upon his arrival at Washington D.C. on May 9, 1963. An in-negative typed caption from UPI Telephoto reads: "Malcolm X, a leader of the Black Muslims, arrives at national Airport from new York 5/9 to set up headquarters in the nation's capital. he said the Black Muslims will sponsor a series of Negro-only meetings aimed at solving the District's crime problems. He denied emphatically that the Muslims preach hate."

6 images taken throughout 1963 of Black Muslims at the Nation of Islam national convention on February 26 and rallies in June and July. With several images of women in white robes and head coverings. Images from the February convention show large crowds listening to a speaker under a large banner reading: "There Is No God but Allah. Muhammad is His Apostle." An image of a crowd of attentive women is captioned " for release with Four-Part Series on "Black Muslims" June 17, 18, 19, and 20."

14 photographs from February 23rd (11) and February 24th (3), 1865. Ten photos from the 23rd show a Black Muslim mosque in Harlem ablaze and the aftermath of the conflagration. The captions speculate that "an 'explosive device' was the possible cause. The explosion appeared to be the first act of retaliation for the assassination of Black Nationalist leader Malcolm X." One from this series has editorial notations and the newspaper clipping it was used in. Another image from Chicago shows the Nation of Islam's University of Islam with the caption: "City policemen guard Muhammad's Temple #2 and the University of Islam here 2/23 to prevent possible damage to the structures in revenge for the slaying of Malcolm X in New York. A 24-hour guard has been placed on these buildings and several others belonging to Black Muslims." Two more images from the 24th show police examining the premises to search for possible explosive devices. Another from this date shows a Black police officer examining a briefcase with the caption: "Tight Security at Malcolm X Services --The briefcase of a visitor is closely inspected by a police sergeant last night before he is permitted to enter the Harlem funeral where the body of Malcolm X is displayed for public viewing. Two other New York police officers block door as strict security measures are enforced at the funeral home in the wake of this week's slaying of Malcolm X and burning of a Black Muslim Mosque. The funeral for the Black Nationalist leader will be held Saturday." This photo also shows editorial notations and has article affixed to verso.

Also includes 2 images from the Nation of Islam national convention on February 26, 1966, with the inflammatory caption: "Members of the Black Muslim Cult gather here 2/26 for their annual convention. Highlight of the 2-day session well be speeches by Elijah Muhammad leader of the Muslim Cult." With an additional image of an envelope from the Consul General of Peru, postmarked July 24, 1963, the address obscured except for "Mr. and Mrs." and "San Francisco."

[With:] Accomplishments of the Muslims. N.p. [Chicago?]: n.p. [Muhammad Speaks Press?], n.d., circa 1973-1974. The glossy booklet illustrates the institutions and programs run by the Nation of Islam. Stamped with [San Francisco] Examiner Reference Library Stamps dated May 6, 1974. Scarce, OCLC locates only 4 copies.

Occasional creasing and wrinkles, some notations.