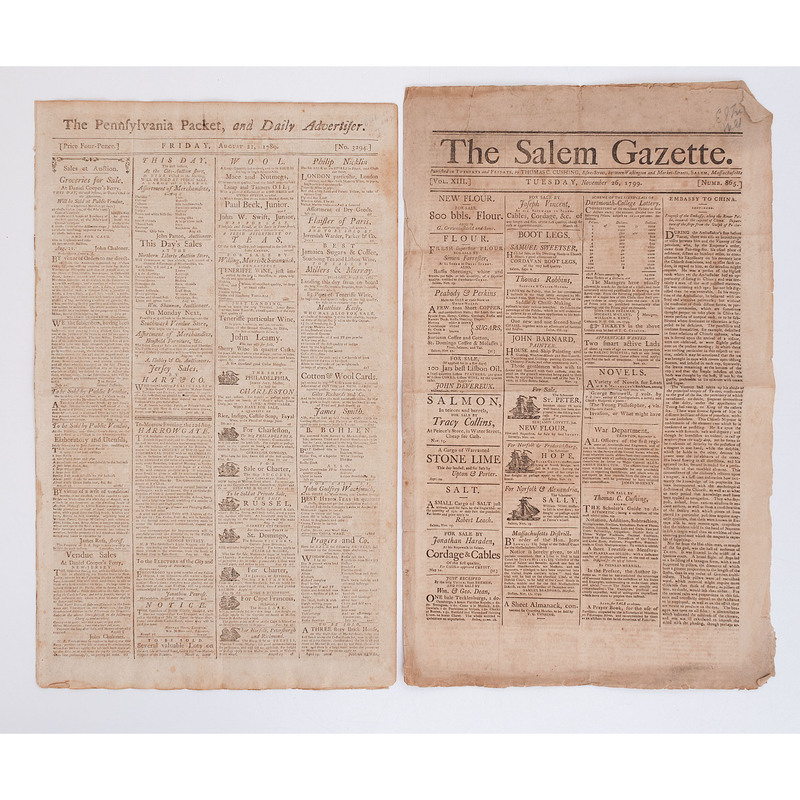 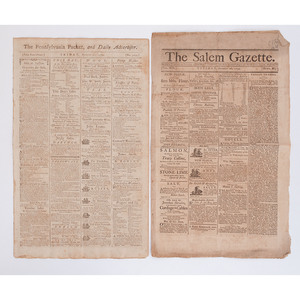 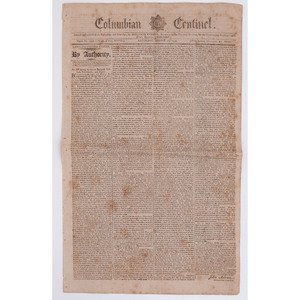 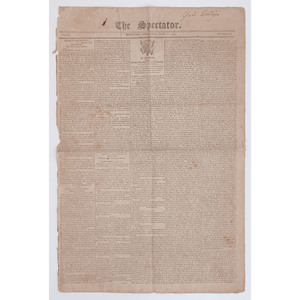 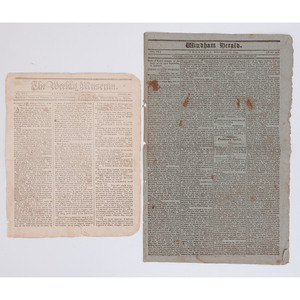 Lot of 6 Original Newspapers Dating from 1789-1799, Including Bill of Rights Debate Reportage

Pennsylvania Packet, and Daily Advertiser. Philadelphia, PA. August 21, 1789. No. 3294. 4pp, 11.5 x 18.25 in. Reports on the Bill of Rights debated in Congress and debates on the amendments of the Constitution in a report from the House of Representatives, August 17, 1789: "Meeting in Committee of the Whole on the Subject of Amendments to the Consitution," draft amendments 8 and 9 approved, as was 10 with changes. Amendments 11-14 “agreed to in their original form.” Elbridge Gerry introduced a motion “That such amendments of the Constitution of the United States as have been proposed by the different states…be referred to the committee of the whole house and that those, with the amendments proposed by that committee, be included in one report.…”  James Madison argued for amendments to guarantee individual rights in a speech in the House on June 8, 1789. Madison’s draft amendments along with proposals from the states were debated in the House and eventually approved by the House and the Senate. In September 1789, a conference committee proposed twelve amendments that were sent to the states. By 15 December 1791, three-fourths of the state legislatures adopted ten of the amendments. Also includes Indian Affairs content with Creek leader Alexander McGillibray writing on peace negotiations: “the chiefs have resolved to put off the meeting for the present…the body of warriors were in arms, owing to the commissioner's letter of last winter… but the Chiefs being ready to listen to just terms of peace, they agreed to meet the commissioners to treat as they requested; but some parties had gone out could not be stopped...having done mischief and killing several people, the...people stopped the Chiefs from proceeding to the Oconee, apprehensive that they may sustain injury and insult form the people of that country, the Chickasaws..."

Windham Herald. Wyndham, CT. December 12, 1789. Vol. IX No. 458. 4pp, 10.5 x 16.5, on blue paper. Front-page text of the speech by President John Adams to Congress in Philadelphia on Dec. 3. He presses Congress for reforms in the judicial system and addresses relations with the French republic, reports on plans to move the national capital. Message signed in type by Adams. Also includes a complete list of all of the vessels in the American Navy.  (Occsional spotting, worn edges, previously bound.)

Colombian Centinel. Boston, MA. August 12, 1797. Vol. XXVII No. 36, Whole No. 1398. 4pp, 11.75 x 19.25 in. Entire front page devoted to the text of a new stamp tax, with news form the Congress in Philadelphia, May 15, 1797. With the full text of “An Act Laying Duties on Stamped Vellum Parchment and Paper" which included duties on a range of documents including certificates of naturalization, letters patent, and wills (which was the effective introduction of an estate tax). Complete text signed in script type by John Adams  as President of the United States. Revenues from requiring a federal stamp on wills in probate and other documents were used to pay off debts incurred during the undeclared naval war with France. Congress repealed the Stamp Act in 1802. Also includes reports on naval conflict with France, with American ships detained at Cape Francois in Haiti by the French, including the schooner Hetty of Charleston. (Some spotting, previously bound)

The Spectator. New York, NY. July 10, 1799 (subscriber’s copy of Yale College). Vol. II No. 187. 4pp, 13.25 x 20 in. Front-page account of an act passed by the Congress on December 3, 1798: "An Act Providing for Compensation for Collectors of Customs throughout the United States" approved and signed in type by President John Adams, March 2, 1799 Reports on the undeclared naval war with France, includes a front-page printing of treasury circular signed in type by Oliver Wolcott suspending commercial trade with France, and complaints of American ship captains reporting on attacks on Americans in the port of Curracoa (Curacao): "We, Masters of American vessels now in this port, do declare that...a number of seamen belonging to our vessels, were without provocation, wantonly attacked, and some of them curelly wounded and beaten, by some French People, armed with knives pistols etc. We their captains and officers hearing of this, went to assist in restoring peace; when we got to the scene…a general scuffle took place; the guard then arrived bringing with them an unusual number of armed Frenchman, mulattos and some slaves…. the guard conveyed the whole of us to prison, suffering the negroes and others to wound, beat and abuse us at pleasure…without giving us the protection that our situation demanded...” Also includes Indian Affairs content with the Creek Indians expressing concerns about the extension of the boundary between the US and Spanish Territory, with Chief Methlogey writing “I being informed only 13 days past, from the mouth of the Spanish officer commanding the Spanish garrisons at St. Mark…that there was a line now running by the Spanish people and the Americans which would run into several of the Indian towns and that all of the Indians that fell on the Spanish side line, the men would be made slaves to work on the ground for the Spaniards…" James Seagrove responding: “You and all the Creek people must know that the great River Mississippi is a line between the Spanish and American settlements on the west side; and that the Spanish nation hath long, and still do possess the seacoast from the Mississippi River to St. Mary's pier. It therefore became absolutely necessary, that it be clearly and well understood how far the territory or government extended back, from the seacoast into the country.… I do declare to you and the whole of the Creek Nation, that I then and still do, consider the running of the said line, as quite harmless to you or your interests, and purely intended to fix the line of territorial jurisdiction between the United States and the Spanish Government.  Seagrove was the former emissary of the US Government to the Creek nation. In 1796, the Treaty of Colerain between the Creeks and United States was signed at the small town Seagrove had founded. Includes a runaway slave notice: “$10 reward RUNAWAY FROM SUBSCRIBER, AN NEGRO MAN NAMED HARRY about 20 years of age; he is near 5 feet eight inches high and wears his hair tied.… Whoever takes in the said Negro and gives information to his master shall have the above reward and all reasonable expenses…" (Occasional spotting, worn edges, previously bound.)

Salem Gazette. Salem, MA. November 26, 1799. Vol. XIII No. 865. 4pp, 11.25 x 18.75. A front-page notice from the War Department: "All officers of the first regiment of artillerists and engineers, and of the first, second, third and fourth regiments of infantry in the service of the United States, who are from whatever cause, absent from their commands, are required with all possible expects addition to report themselves by letter to Maj. Gen. Alexander Hamilton." The case of Jonathan Robbins who had been executed by the British navy for mutiny claiming he was an impressed American citizen. “It is at length proved by evidence…that Robbins was not a Native American…. Americans have been ready to approve and justify his foul unnatural deeds… It is been asserted… That Robbins, alias Thomas Nash was an impressed American seaman. … It is fair to conclude that he took the leading part…in the cruel murder which ensued, solely from thirst for plunder.” Robbins was the leader of a rebellion on an English ship in the midst of the Napoleonic wars. He was hung in chains for his part in the shipboard mutiny and surrendered to British military justice despite his last moment claim that he was an American impressed into the British navy. Robbins’s story provoked a huge argument among Americans. (Worn edges, some soiling.)