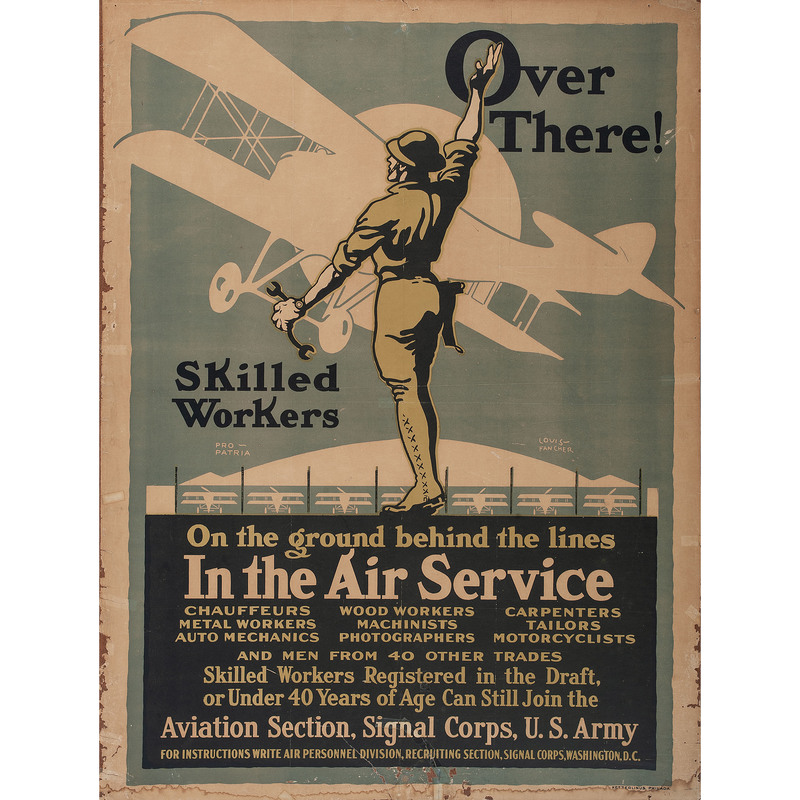 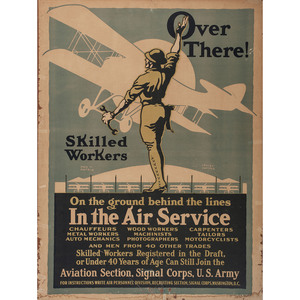 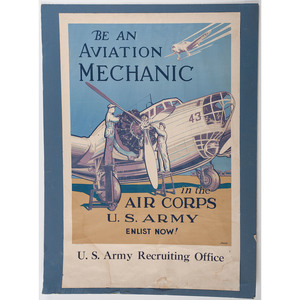 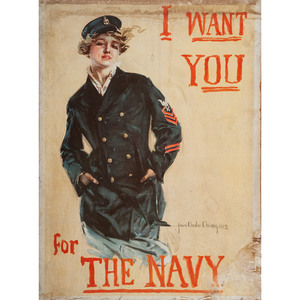 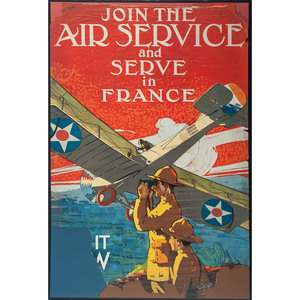 Lot of 4 World War I Posters, Most with Aviation Subject Matter

24.75 x 38 in. (sight), mounted to 29.75 x 40 in., featuring artwork by Spezio depicting two men working on a plane, surrounded by text encouraging young men to "Be an / Aviation / Mechanic / in the Air Corps / U. S. Army / Enlist Now!" Bold text at bottom reads, "U. S. Army Recruiting Office." Poster glued to mount, with discoloration near bottom of poster, minor loss to a few areas, and wear at edges.

30 x 40 in., featuring artwork by Louis Fancher depicting a uniformed soldier holding a wrench in one hand and waving with the other one, with the outline of a large biplane in the background, enticing skilled workers to join the Aviation Section of the Signal Corps. Philadelphia: Ketterlinus, n.d., ca 1914-1918. Illustration with bold surrounding text reading, "Over / There!" and "Skilled / Workers." Text below lists a number of trade jobs including "Machinists," "Chauffers," and "Tailors," to exemplify skills that could be used in the Air Service, along with the following tidbit about enlistment: "Skilled Workers Registered in the Draft, / or Under 40 Years of Age Can Still Join the / Aviation Section, Signal Corps, U.S. Army." Poster with wear including loss to edges and other areas, discoloration near bottom, not examined outside of plastic.

24.25 x 33.5 in., featuring artwork by Howard Chandler Christy depicting a sultry-looking woman in a Navy uniform with red text surrounding her reading, "I Want / You" and "For / The Navy." Ca 1917. Other examples of this poster, including one curated at the Metropolitan Museum of Art, suggest that the original poster had an additional portion at the bottom with large blue text reading, "Promotion For Any One Enlisting / Apply Any Recruiting Station / Or Postmaster." Poster with heavy discoloration, glued to board with marker inscription "Varnum Museum / #0005" on verso.

25 x 36.75 in., featuring artwork by J. Paul Verrees depicting two soldiers, one of whom is using binoculars, with a large American airplane in the background, with bold text above reading, "Join The / Air Service / and / Serve / in / France." N.d., ca 1917. Poster with plentiful loss at bottom, including a portion which should feature text reading "Do It / Now," with only "It" fully visible, and part of Verrees's signature. Some loss to upper corners as well. Not examined outside of plastic covering.

Posters with varying degrees of wear including brittleness, discoloration, and loss.