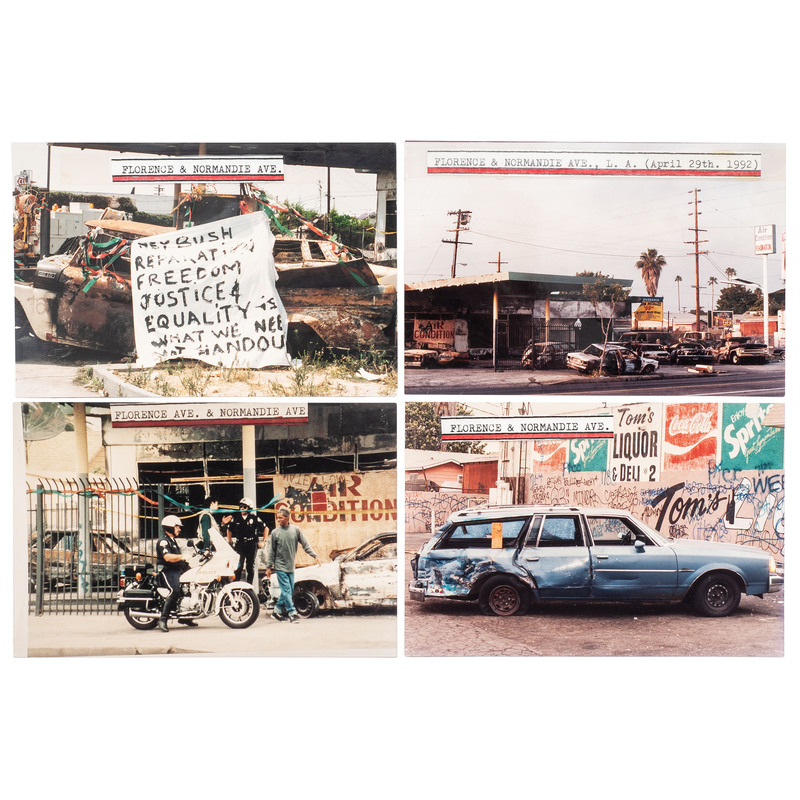 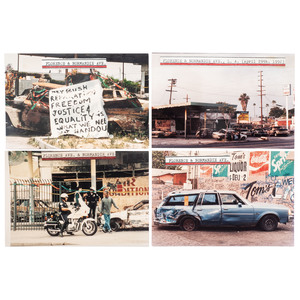 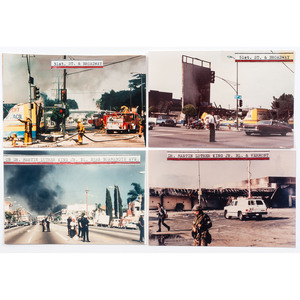 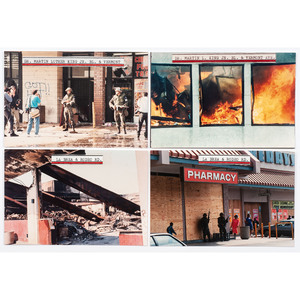 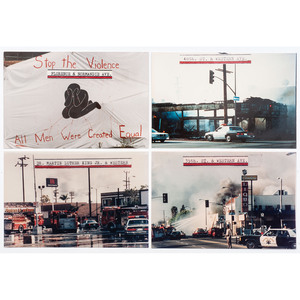 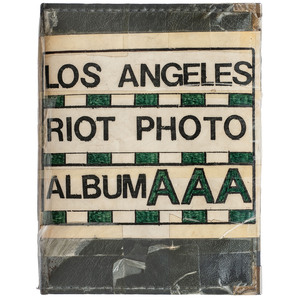 The images capture the effects of the rioting in the wake of the Rodney King building. The photographer captures several buildings on fire or distant smoke, structures reduced to rubble, destroyed cars, and broken windows. Includes before and after images of 120th St & Avalon, showing the original building and the now-charred remains. Heavily armed Military Police are captured talking to reporters and getting photographed. One image shows a bedsheet is painted: "Hey Bush / Reparation / Freedom / Justice & / Equality is / What We Need / Not Handouts." Another is painted with a figure kneeling and holding their head in despair with the phrase, "Stop the Violence / All Men Were Created Equal." Inside front cover with image of blazing building; inside rear cover is a photo of billboard with "We Can Get Along" / Rodney King.

On April 29, 1992, four Los Angeles police officers were acquitted of excessive use of force in the beating of Rodney King (1965-2012). King's arrest and violent beating had been filmed and widely broadcast, and the acquittal was widely viewed as a miscarriage of justice and sparked riots across Los Angeles. A year earlier, Black teenager Latasha Harlins was fatally shot by a Korean-American shopkeeper, who was convicted of voluntary manslaughter. Despite the jury recommending the maximum sentence of 16 years in prison, the judge reduced his sentence to 5 years probation, community service, and a $500 fine. The acquittal lit a metaphorical powder keg of growing mistrust of the justice system and the existing racial inequalities.

The riots, concentrated in South Central Los Angeles with much of the first day's activities on Normandie, pictures of which are included here. The violence lasted for 5 days and necessitated the deployment of the California National Guard, the United States military, and other federal law enforcement agencies. All told, the property damage was estimated at over $1 billion. The human toll counted 63 people dead, almost 2400 injured, and over 12,000 arrested.

Tape on front and rear boards, especially inside.