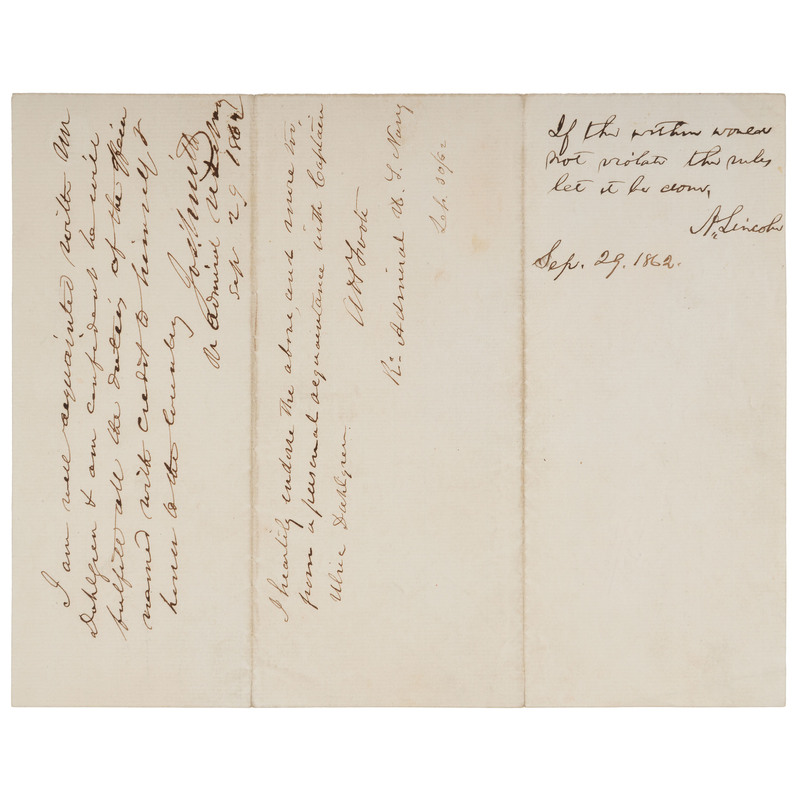 Lincoln writes his approval and endorsement after the recommendations: “If the within would not violate the rules let it be done, / A. Lincoln / Sep. 29. 1862.”.

Commodore Smith had commanded John Dahlgren in 1843 in the Mediterranean Squadron. He recognized Dahlgren’s abilities and got him appointed to the Washington Navy Yard in 1847. Foote, described by one historian as John Dahlgren’s closest friend in the Navy, headed the New York Navy Yard on the eve of war and moved on to command the Mississippi River Squadron. Lincoln, too, had established a personal relationship with John, who did not hesitate to lobby for his son. Ulric had enlisted in the Navy and by July 1861 had become his father’s assistant at the Washington Navy Yard. In the spring of 1862, the Union anticipated a Confederate attack at Harper’s Ferry. Unable to go himself to oversee artillery preparations, John sent Ulric and the guns. Back in Washington on May 24 to secure ordnance supplies, Ulric was taken by his father to the President to report on the situation at Harper’s Ferry. John took the occasion, in the presence of both Stanton and Fox, to suggest that his son would benefit from an “official position.” Fox offered Ulric the position of Acting Master’s Apprentice, but Stanton upped the ante by offering to make him a captain in the Army. This endorsement effectuates the appointment. Ulric fought in a number of important battles including the Second Battle of Bull Run, Fredericksburg, Chancellorsville, Brandy Station, and Gettysburg where he was wounded forcing a leg amputation. He was commissioned as a colonel on 24 July 1863 but was killed in action during “Kirkpatrick’s Raid” on Richmond on 2 March 1864.

Cowan's is pleased to offer the third installment of Richard B. Cohen's collection of Civil War Brown Water Navy photography. Richard was known to many in the field as a "disciplined collector who maintained a relatively narrow focus having built an important, perhaps unsurpassed collection in his area of specialization." From cartes de visite to large format photographs, this portion of the collection features a noteworthy selection of images of Brown Water Navy warships, among them, the USS Benton, Choctaw, Lafayette, and Louisville. Many important identified naval officers are also represented, including an exquisite CDV of the promising young officer, Lieutenant Commander William Gwin, who died of wounds aboard the USS Benton following an artillery duel with Confederate forces at Snyder's Bluff, and an exceptionally large war-date photograph of the controversial commander of the USS Pittsburgh, Egbert Thompson.

This auction also features a premiere selection of autographs and manuscripts from Richard's carefully curated collection. Highlights include a letter from Jefferson Davis to his distant cousin, John J. Pettus, Governor of Mississippi, dated a year before secession, conveying intricate plans for securing armaments in preparation for the war; an Abraham Lincoln signed endorsement; a letter from Admiral D.G. Farragut from New Orleans, offering excellent insight into his "political" thinking as well as his dedication to his work; correspondence from Gideon Welles, David Dixon Porter, U.S. Grant, and W.T. Sherman; and a pair of superb letters with highly descriptive accounts of the Battle of the Monitor and Merrimac. 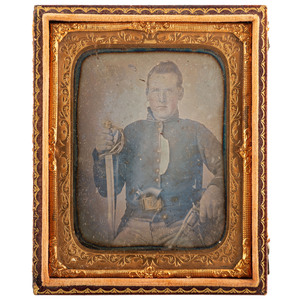 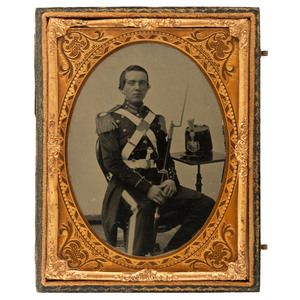 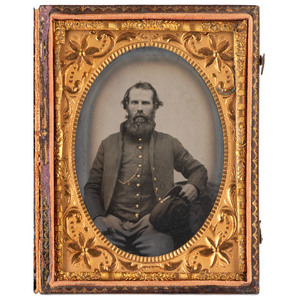 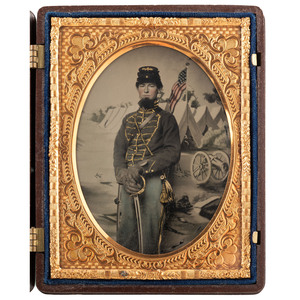