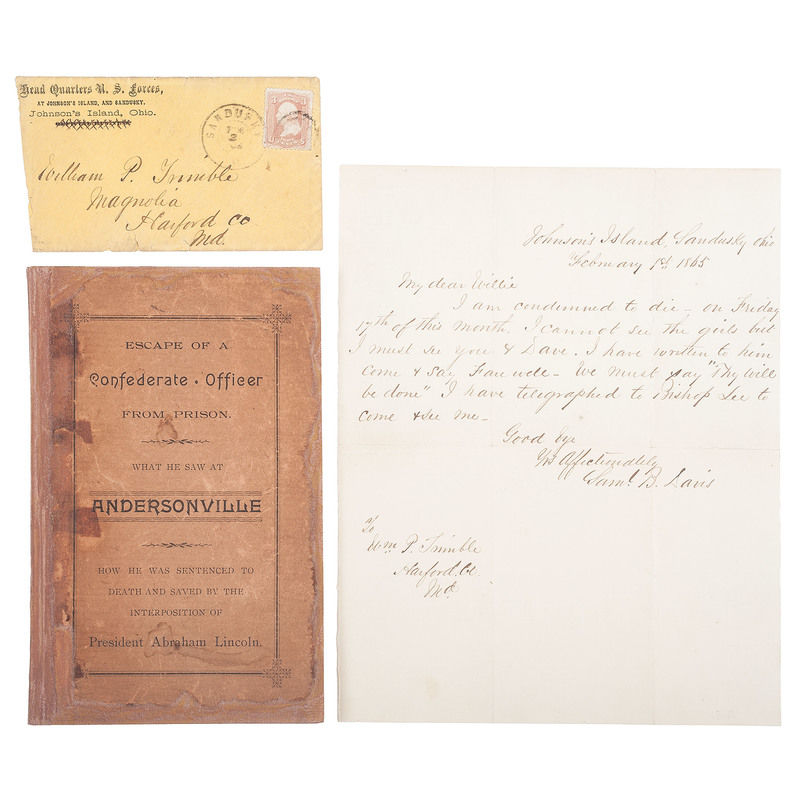 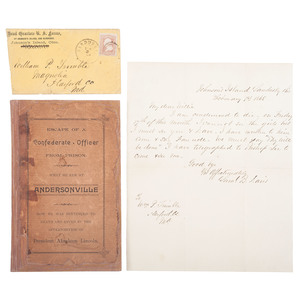 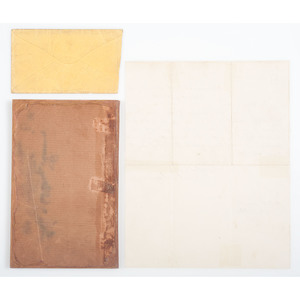 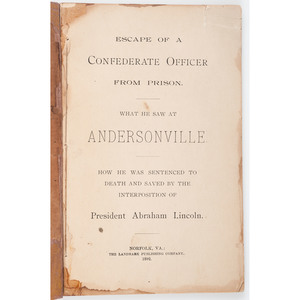 Davis, Samuel Boyer. Confederate spy. ALS, 1p, 7.75 x 9.75 in., "Johnson's Island, Sandusky Ohio." February 1, 1865. Addressed to William P. Trimble, Davis' cousin and son of Major General Isaac Trimble. Written days before he was to be executed for espionage, Davis states in part, "I am condemned to die on Friday 17th of this month. I cannot see the girls but must see you & Dave. . . Good bye."

Lot includes the original envelope, an official Johnson's Island cover, with a "Sandusky O. Feb 2, 65" cancellation, as well as paperback copy of Davis's memoirs, entitled Escape of a Confederate Officer from Prison. What He Saw at Andersonville, How He Was Sentenced to Death and Saved by the Interposition of President Abraham Lincoln. Norfolk, VA: The Landmark Publishing Company, 1892.

Davis was an aide to his uncle, Major General Trimble, and fought alongside him at Gettysburg, where Davis was severely wounded and captured. He managed to escape from the hospital and returned to the South, where he was assigned to duty at Andersonville Prison. In December of 1864, he undertook a secret mission for the Confederacy, wherein he conveyed important documents through the North to a Rebel base in Canada. During his return, with dispatches for Richmond hidden in his coat sleeves, Davis was arrested, placed in irons, and brought to Cincinnati for trial, where he was charged with espionage and condemned to hang.

On February 2, 1865 he was taken to Johnson's Island to await execution. Davis watched the construction of the scaffold and saw men testing the rope for the noose. A few moments before the execution, however, the prison’s commanding officer came to Davis’ cell with the notice that he had been pardoned by President Lincoln. With his sentence commuted, Davis spent time in prison at Fort Delaware and Fort Warren in Boston. He was finally freed in December of 1865.

Letter with creasing as expected.