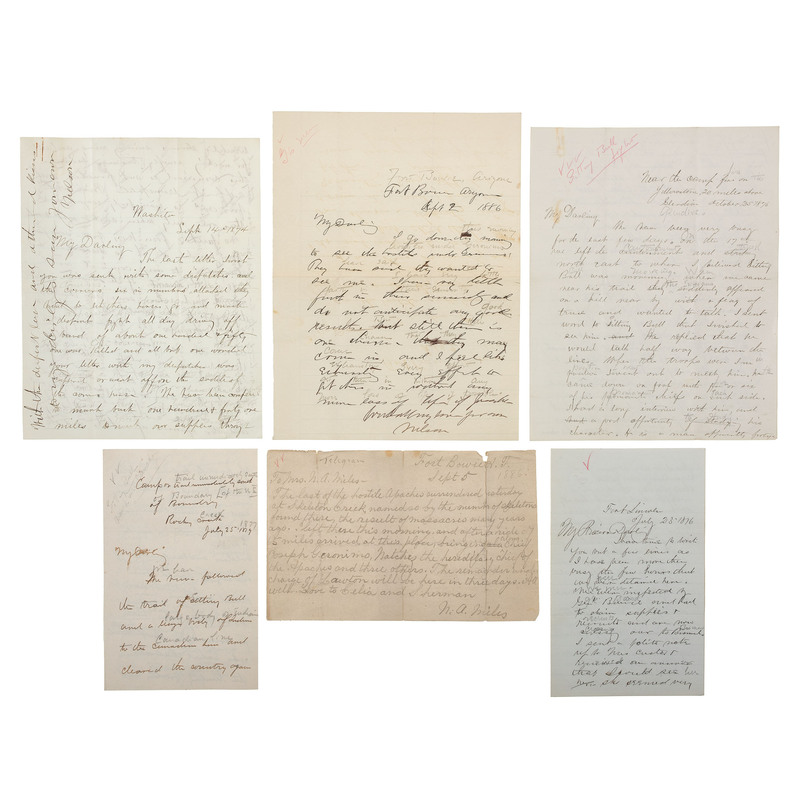 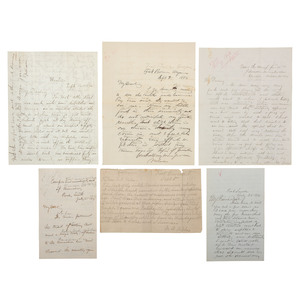 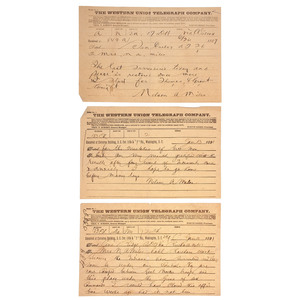 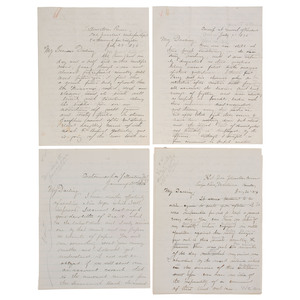 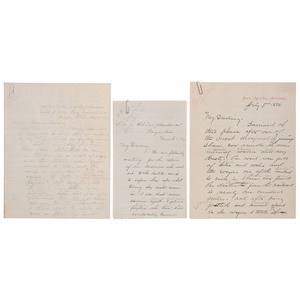 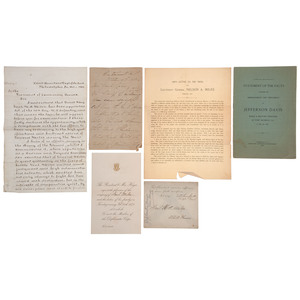 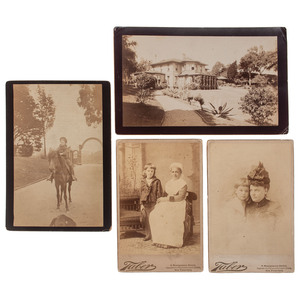 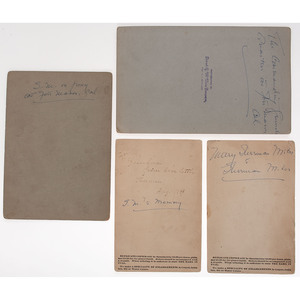 Extraordinary archive of approximately 300 items, including more than 250 original letters written by General Nelson Appleton Miles (1839-1925), Civil War hero, Medal of Honor recipient, leader of major US Army operations during the Indian Wars of the 1870s-1890s, and last Commanding General of the United States Army. Letters are addressed to his wife, Mary Hoyt Sherman (1842-1904), niece of Gen. William Tecumseh Sherman. Archive spans 1863- ca 1913, bulk 1867-1894 including all of Miles's correspondence to his wife. Miles successively commanded the Departments of the Columbia, Missouri, Arizona and Divisions of the Pacific and Missouri. Letters document his decades-long career spent in pursuit of iconic American Indian figures such as Sitting Bull, Chief Joseph, Crazy Horse, and Geronimo, offering a historically significant and unabashedly candid firsthand account of the US military's prosecution of the late Indian Wars.

Recognized as one of the most accomplished and capable soldiers ever to serve in the US Army, Gen. Nelson A. Miles was also known for relentless ambition. Unlike many of his fellow officers who boasted a West Point pedigree, Miles's military career began more humbly as a volunteer infantryman at the onset of the Civil War. From there his courage and leadership would fuel a meteoric rise through the ranks to Major General of Volunteers in 1865. He participated in nearly every major battle of the Army of the Potomac including Antietam, Fredericksburg, Wilderness, Spotsylvania, and Petersburg, and he received the Medal of Honor for "gallantry in holding an advanced position in face of repeated attacks" at Chancellorsville. Reflecting the high esteem with which he was regarded among his fellow officers during and after the war, the earliest documents in the collection are copies of letters of recommendation written on his behalf by Generals Caldwell, Barlow, Howard, Humphreys, Meade and Grant. Miles was appointed colonel in the Regular Army in 1866.

The earliest letter in the collection written by Miles is dated Feb 21st, 1867, and is addressed to his future wife. Nelson Miles and Mary Sherman commenced a courtship that was solidified by marriage on June 30, 1868. Sixteen letters spanning 1867-1869 document the early days of their acquaintance and marriage. Though some have questioned whether Miles's marriage was based on a desire to further his career via Mary Sherman's politically and militarily connected family, these early letters and indeed all of his correspondence reveal a a man who appears to care deeply about his wife and family. Addressing her typically as "My Darling" or "My Own Precious Darling," Miles seemed to find in Mary a true friend and ally. Perhaps most importantly, the subsequent 200+ letters exchanged between them indicate that Mary was a cherished and trusted confidant. Miles's letters to his wife provide detailed discussions of his military campaigns and unvarnished opinions of the personnel involved in them.

Beginning with letters written from Fort Harker, Kansas, in August 1869, nearly every letter in the collection thereafter documents Miles's service in the US Army: the 1874 Red River War against the Comanche, Kiowa, Southern Cheyenne, and Arapaho; 1875 hostilities at Cimarron, NM, involving the Ute and Apache; the 1876-1877 Great Sioux War against the Lakota Sioux and Northern Cheyenne; the 1877 Nez Perce War; the 1886 Apache Wars; the San Carlos, Arizona, Indian uprising of 1887; and the Wounded Knee Massacre of 1890 are all documented.  In well over 1,000 pages of correspondence, Miles details his expeditions throughout the West. He describes Sitting Bull as "a man evidently of great influence and a thinking, reasoning being" (Oct 25, 1876) and Chief Joseph as "a very superior Indian, far above any others I have met in intelligence and ability, and a fine-looking mild-mannered man" (Oct 14, 1879). He describes the aftermath of the Battle of Little Bighorn, and the tragedy at Wounded Knee calling it "the most abominable criminal military blunder and horrible massacre of women and children" (Jan 15, 1891). He describes his distaste for incompetent officers and his anger that the US military has not properly recognized his successes. In his later writings, Miles conveys a recognition that officials in Washington had grievously mishandled Indian affairs: "There has been no branch of our government so corrupt and disgraceful to the Republic as the management of our Indians affairs" (Dec 22, 1890).

Though never appearing at auction before, the Miles family did grant author Virginia Weisel Johnson (1910-1988), wife of Brigadier General William M. Johnson, access to these letters for her book The Unregimented General: A Biography of Nelson A. Miles (1962). According to a letter authored by Major-General Sherman Miles (1882-1966) which appeared in the preface of Johnson's book, the original letters offered here were discovered in "an old army chest" in the 1950s and were given to Johnson "for whatever use you care to make of them in the book on my father you are now writing." Prior to handing the letters over to Johnson, however, Sherman Miles personally edited each letter by transcribing portions of text and making notes as to content. More significantly, in some cases Sherman Miles selected large portions of letters to be omitted from Johnson's book and omitted at least 32 letters in their entirety from publication. This offering therefore marks the first time Gen. Miles's unedited, unrestricted correspondence to his most trusted confidant will be publicly accessible, potentially opening new avenues of research into Miles and his pursuance of the Indian Wars.

While many details omitted from Johnson's book are of a personal nature - tender exchanges between Miles and his wife, for instance - it is clear that not all omissions were made for this same reason. In the aftermath of Custer's disastrous defeat at Little Bighorn, Miles writes to Mary on July 20, 1876, from the steamer E.H. Durfee along the Upper Missouri relaying this rumor which was not published in Johnson's book: "We also learned that runners had been after ammunition and there were reports which do not [appear] to be well founded that Sitting Bull was dead. If this should happen to be true it would have quite an effect upon the result of the campaign." In recounting his successful engagement with Sitting Bull and the Sioux on the Yellowstone, Miles's offered this candid remark on October 25, 1876, which Johnson was not permitted to publish: "...and if it does not result in my favor then there would be no use of the efforts." Following Chief Joseph's surrender and while making the march to headquarters, Miles wrote the following unpublished observations to Mary in a letter of October 20, 1879: "The Indians lost...two dead on the road...40 killed and some 50 or hundred I can not yet tell there are many badly wounded with us, and any number slightly wounded. The number of [Nez Perce] widows & orphans is quite large." One letter omitted in its entirety was written on September 25, 1886 from Albuquerque, N.M. As Sherman Miles noted on the letter itself, his father expresses "Indignation over treatment." Receiving notice that a requested leave was not to be granted, Miles shares his anger and resentment with Mary: "I was not surprised but enraged...This requires no explanation. They [his superiors] have tried every measure to prevent me succeeding. Have...tried to rob my command of the credit of victory and now try to keep me in this country until they can fix matters to suit themselves."

Additional documents in the archive include the following: a letter from Miles to Mary's father requesting her hand in marriage; a letter from Charles Sumner to Mary's father offering his opinion on Nelson Miles as a suitable husband; a guest list for the 1868 wedding of Nelson Miles and Mary Sherman, along with an invitation to their wedding; an invitation to the White House and invitations to ceremonies honoring Miles; letters written by Miles during the 1894 Pullman strike riots in Chicago; letters written during Miles's 1897 military tour through Europe; "A Statement of the Facts Concerning the Imprisonment and Treatment of Jefferson Davis While a Military Prisoner at Fort Monroe, VA in 1865 and 1866" (1901); "Open Letter to the Press from Lieutenant General Nelson A. Miles" (1905); and "In Memoriam" published on the death of Gen. Miles by the Military Order of the Loyal Legion of the United States, Oct 1925.

Archive descended directly in the family. An exceptionally rare and historically important collection documenting one of the most consequential figures in the history of the American West.

Letters are generally in good condition and easily legible. Sherman Miles's pencilled notations appear on nearly every page of every document.