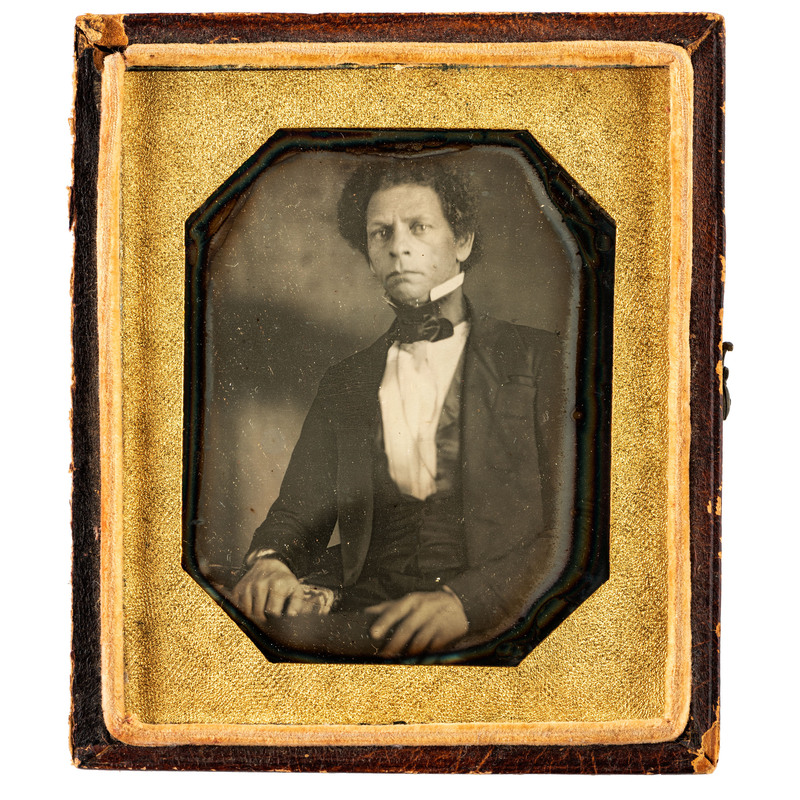 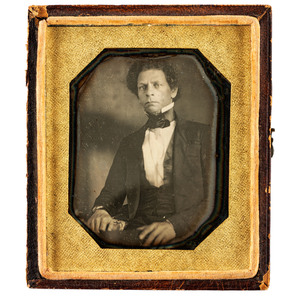 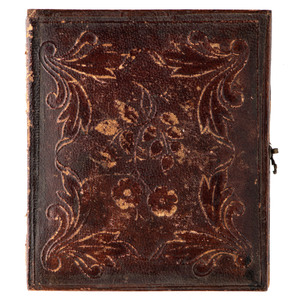 Sixth plate daguerreotype. (Plate with tarnish around the perimeter). Housed in full pressed paper case under mat and glass (no preserver, case separated at hinge and with mismatched recto and verso design imprints). Not removed from case for inspection.

Joseph Jenkins Roberts was born free in Norfolk, Virginia, the son of an unknown father believed to be of Welsh origin and his mother, Amelia, a manumitted woman of mixed-race. Roberts received his surname from his stepfather, James Roberts, a free Black man and prosperous trader who operated a river transport business between Norfolk and Petersburg. The Roberts family relocated to Petersburg in 1815, and it was from there that a twenty-year old Joseph Jenkins Roberts, his first wife, a young child, and many other members of his family, departed for the colony of Liberia in 1829. There Roberts's talents as a businessman and diplomat fueled his rise as a merchant, high sheriff, and eventually vice governor. While the colony was still under the general authority of the American Colonization Society he was appointed the first African American to serve as Governor of Liberia (1841-1847), and when at last the colony secured its independence he was elected to serve as Liberia's first president (1848-1856). As the first president of Liberia, Roberts demonstrated to the world the capacity of African Americans for self-government. He would later serve again as the young nation's seventh president (1872-1876).

Though Roberts's likeness has been reproduced in various forms including lithograph, engraving, and portraiture, OCLC locates only two photographic images of Roberts, both held in the American Colonization Society Records housed at the Library of Congress Prints and Photographs Division. The first photograph (half-length portrait, full face, #LC-USZC4-4609) is a ca 1855 sixth plate daguerreotype of Roberts by New York photographer Rufus Anson and is believed to be a copy of an image taken in Liberia by noted African American daguerreotypist Augustus Washington. The present location of the original Washington image which dates to ca 1854 is unknown. The second photograph of Roberts (head-and-shoulders portrait, slightly to right, #LC-USZ6-1945) is a sixth plate daguerreotype by Augustus McCarty (sometimes "McCartey") which LOC speculates was created between 1840 and 1860. McCarty was born in 1832 meaning that his photograph of Roberts was more than likely created well after the 1840s. The 1853 Washington, DC, city directory lists McCarty as a daguerreotype artist suggesting perhaps a closer approximation of the date near which his Roberts daguerreotype was created.

The image offered here appears to show a younger man than that which is depicted in either the Anson or McCarty photographs, thereby dating this particular photograph to ca 1840s. Roberts returned to the US for the first time in 1844, during his period as Governor, and it may have been during this visit that he sat for this daguerreotype by an unknown artist. As in the other two daguerreotypes Roberts wears formal dress befitting a man of his stature, and simultaneously conveying via his image the promise, capabilities, and strength of free men of color. A rare and significant image of the man who would come to symbolize the new Liberian republic.