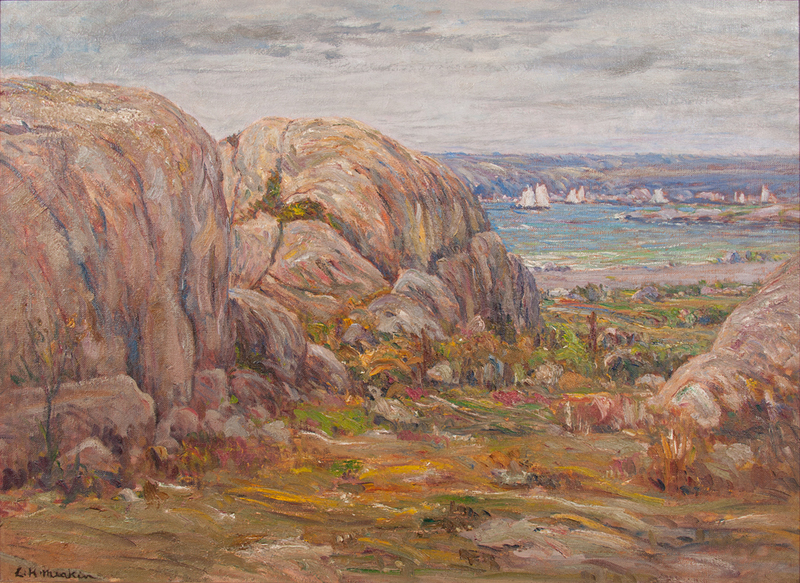 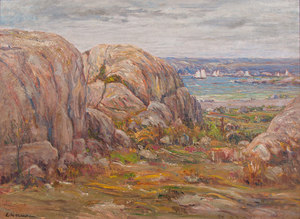 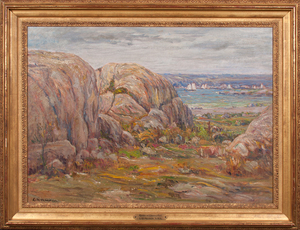 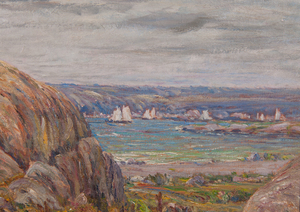 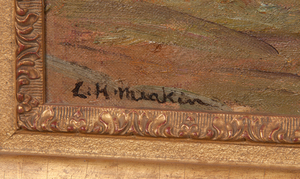 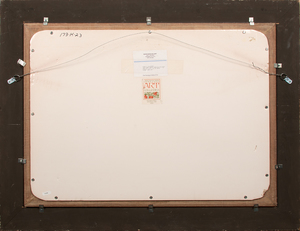 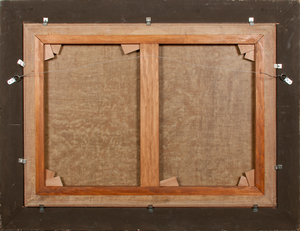 Rocks at Gloucester represents the height of Meakin’s work and has attracted notable critical acclaim. Dr. James J. Sanitato of Cincinnati, OH, author of working manuscript of a biography of Meakin, writes:

During his lifetime, Lewis Henry Meakin (1850-1917) was widely regarded by patrons, art critics, and fellow artists as an important figure in the American art scene. Robert Henri, noted American painter and father of the Ashcan School of artists, praised Meakin remarking:

“We will appreciate Mr. Meakin someday as a highly sensitive artist just as we now, after too much delay, appreciate Twachtman, for Mr. Meakin is an artist of exquisite sensitiveness and great draughtsman, because every stroke represents a consciousness of life, of intense spirit, and intense perception of nature.”

George Wesley Bellows once commented to an art critic during an interview about Cincinnati artists,

“You speak of Duveneck, but how about Meakin? I consider him one of the best landscape painters in America.”

Meakin was the first member of the Society of Western Artists to win the Fine Arts Building Prize twice. He exhibited nationally and was recognized by his peers for his artistic accomplishments by being elected an Associate in the prestigious National Academy of Design.

“Rocks at Gloucester” is a wonderful example of Meakin’s mid-career painting style. This colorful, well-executed painting masterfully captures the bright light the Cape Ann coast was famous for and drew so many artists there each summer during the nineteenth century. The large granite boulders at the mouth of Gloucester harbor are rendered in sun and shadow with a dazzling array of unctuously applied paints. The sunlit surfaces of these massive, craggy rocks are contrasted with the richly colored shadows done in purple, ultramarine, and dabs of vermillion. The foreground coastal scrub vegetation in bright sunlight leads the eye into the gap between the rocks that gently slope down to the beach and waterfront. In the distance lies the entrance to Gloucester’s inner harbor and the many boats and ships with full sail plying the waters of this busy commercial port.

This painting was probably done by Meakin in the summer of 1897 while vacationing at Gloucester with Frank Duveneck. Both men traveled there after the close of the academic year at the Cincinnati Art Academy where both were faculty members. They stayed at the Beachcroft Hotel in East Gloucester overlooking the inner harbor and the picturesque fishing sheds and docks of Rocky Neck jutting into tranquil Smith’s Cove.

In a letter sent late that summer to Joseph Gest, the Director of the Cincinnati Art Museum, Meakin wrote:

“Time here is going very fast with me. Shall bring back some canvasses. Just what they will amount to remains to be seen…Mr. Day, who is an old seaman took Duveneck, [Childe] Hassam, and I out for a sail yesterday. It was very pleasant…I have got interested in rocks here this year, not so much in the water, but in the uplands – with the grass and babybushes, etc. Do not know how they will interest other people but I am enjoying painting them. They are very fine in nature.”

“Rocks at Gloucester” is most likely one of the canvasses described in this letter and brought back to Cincinnati from his summer’s work at Gloucester. It is a noteworthy work and fine example of American Impressionism. This painting is an important work by a major American artist in the prime of his career.

[Meakin] was aware of the importance of ideas, an awareness which distinguished him, for example, from Frank Duveneck. It is what makes Meakin’s Rocks at Gloucester (plate 26) expressive and forceful compared to Duveneck’s Gloucester (fig. 11 collection Cincinnati Art Museum) which seems bland and generalized. “It is…unfortunate,” Meakin once wrote, “that in painting, the representation or imitation of natural objects plays so important a part, the result of which is that the sentiment of nature, the thought, or even the decorative value…is often more or less lost sight of by the observer…thus mistaking the means for the end.”