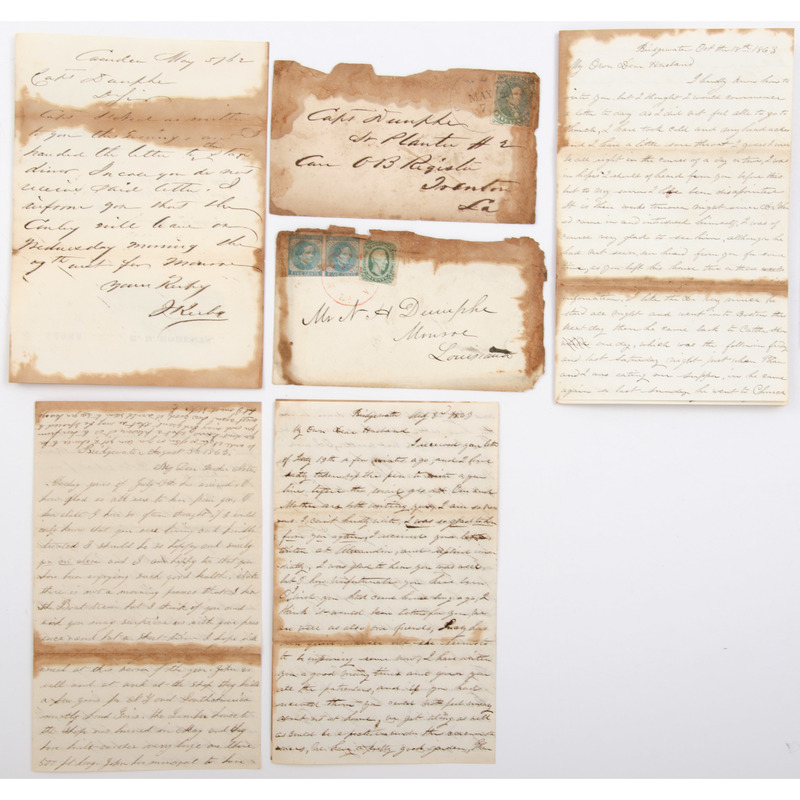 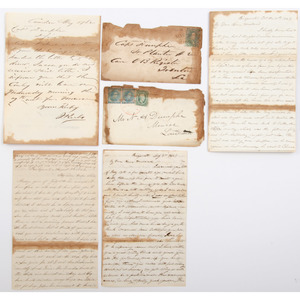 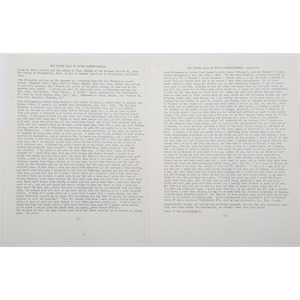 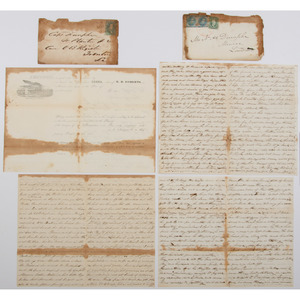 Dunphe was a steamer captain and agent, trading between the northeast cities and the South. He apparently was in the South when war broke out and was trapped there. According to the Congressional Record of 1885, House bill 754 was for the relief of Nathan H. Dunphe of Bridgewater, MA for the loss of a quantity of sugar, seized by Union troops. The record indicates: "This day appeared before me Frederick G. Pope, a resident of Boston ... personally known to me as a gentleman whose statements are entitled to ful credit and belief, and being first duly sworn, declares that during the month of May, 1863, he held the position of captain of Company D, Third Massachusetts Cavalry, and, by special orders from the War Department, had been appointed and was then acting as seizing officer of sugar, cotton, horses, and other property found inside the rebel lines, near Barre's Landing, in the State of Louisiana, where he was stationed as such seizing officer." It goes on to track the sugar to some warehouses, some being used by troops in the area. "The steamer Laurel Hill, then in the service of the United States, came up the river to the landing for cotton, of which there was, at that time, in his charge at this point about 2,000 bales, was ordered by Major-General Banks to load the steamer with cotton. To enable her to carry 300 bales it was necessary to ballast her, and the 30 hogsheads of sugar mentioned above were also, by order of General Banks, put aboard the Laurel Hill for ballast. The Steamer with the above cargo, and with General Banks on board and in command, steamed down the river for New Orleans, and that was the last that he, the deponent, saw of the sugar or cotton. The cargo of sugar and cotton was directed to Colonel Holabird, chief quartermaster of the Department of the Gulf, at New Orleans...."

The Congressional Record goes on to note: "The facts are also abundantly established by the evidence of several other witnesses. Dunphe was a loyal man, a citizen of Massachusetts, engaged in trade in Louisiana when the war broke out. He gave valuable aid and information to the United States, and suffered imprisonment at the hands of the Confederates on account of his loyalty. ... We recommend the passage of the bill."

The first note is on the back of a shipping form for the Steamboat Leona. Camden (Arkansas), May 5/ 62. From J. Kirby informing Capt. Dunphe that he has sent a letter by way of a stage driver and letting him know of the departure of another steamer (Anby? Conley? Canby?) on Wednesday. With cover with one 5 cent Confederate Jefferson Davis stamp, postmarked May 7.

The second is a group of letters, one from Dunphe's wife, Jennie (4pp), his sister Emma (4pp) and "Mother O'Neal," Jennie's mother. All headed Bridgewater, Aug. 3, 1863. "My own dear Husband, I received your letter of July 19th, a few minutes ago, and I have hastily taken up the pen to write you lines before the mail goes out...I was so glad to hear from you again. I received your letter written at Alexandria, and replied immediately. I was glad to hear you was well, but O, how unfortunate you have been. O, I wish you had come home long ago, I think it would [have] been better for you... I have written you a good many times and given you all the paticulars [sic], and if you had received them you could not feel uneasy about us at home... Frank came home from Ohio a year ago last Thanksgiving, and has been in Washington ever since, he gets $50 per month he is in the Sanitary Commission. I had a letter from him day before yesterday, he was well, he wrote me he thought of going down south to look you up. I wrote him in the receipt of your letter, written at Alexandria, and he wrote me that he wrote you immediately. As I look over this letter, I fear you will not understand it, I have written so fast and under excitement too, for I am anxious to get this letter to the office.... how glad I would be if you would come home, my love to Duncan and yourself, Your Jennie."

The second letter in this group is from his sister, Emma. "My Dear Brother Nate, Today yours of July 19th has arrived. O how glad we all were to hear from you. O Dear Nate I have so often thought if I could only know that you were living and kindly treated I should be so happy and surely you are alive and I am happy too that you have been enjoying such good health....John is well and at work at the shop they build a few Gins for NY and South America, mostly hand Gins...Warren is at home now, he has been Whaling but the Bark was taken by the Floridas and all he had was burned, but the crew were spared and have all arrived home... O Dear Nate I wish you could have received all the letters I have written, you don't know how many I directed in the care of Cushings, perhaps you may get some of them yet... I can tell you how I wish I could write as I pleased I don't like this restraint - O there is so much more I would like to say but not a word can I utter for fear of making trouble, never mind perhaps the time will come when you will know all...Nate don't stay there much longer your family is small you had better come home a poor man than not come at all,... - Em

The third in the group is from his mother-in-law, "Mother O'Neal." A shorter letter in a much different tone: "Well, Mr. Dunphe Jane said I must write a little with the rest...I gess [sic] we ware all glad enough to hear that you ware living yet. I don't know as thare has been one night since I have been here but Jane sais Oh I wonder whare Nathan is to night I was so glad she heard from you again....from Mother O'Neal." Most of these letters are full of family news.

The third letter is a long one from Jennie/Jane, 16pages, written between Oct. 18th and Nov. 8th, 1863. "My Own Dear Husband, I hardly know how to write you, but I thought I would commence a letter today...I was in hopes I should of heard from you before this but to my sorrow I have been disapointed. It is three weeks tomorrow night since Dr. Weaver came in and introduced himself, I was of course very glad to see him, although he had not seen, nor heard from you for some time, as you left his house two or three days after wrote me, I could get but little information....when Phanor and I was eating our supper in he came again... he is looking for his folks... It has been a cold disagreeable day so I did not go to Church, it makes me feel sad when I think of the cold winter coming on and what an awful state our country is in. Would to God could peace be restored to all of us once more... if you do not think you will be at home the spring I want you to write me for I shall not try to do anything in the garden, I shall let it if anyone will take it, but if you are ever coming home, I should think you would come in the spring and I do hope and pray you will, for this way of living is horrid.... I do not know as I wrote you that Ezra was wounded at Gettysburg the 3rd of July, and he is still there as he is not able to be moved, the ball was still in his leg in his knee, and the last letter I had from Leroy he was afraid he never would be any better, but he was in very good spirits and his wound discharged very freely, but the Dr. told Leroy that such cases, nine out of ten died. I hope he may live on his mothers account. I think it would go very hard with her....Nov. 8th. I have been to Church to day and when I got home who should be here but Mr. Belcher. I tell you I was glad to see him and I could not keep from crying knowing he had seen you so lately, ...he said you was looking as well as ever, he saw you in July and that seems lately to me when I think of the time you have been gone. O Nathan how glad how glad I would be if you would only come home...Mr. Belcher says he will carry anything I want to send you, I think you will want your coat this winter but I hardly know whether to send it or not, for fear you will not get it and you have two pair of socks I could send, and if I was sure you would get them, I would send them all, if you should not get them I should feel sorry I sent them....I remain your faithful Jennie.

There are two covers with these, both with Confederate stamps - one with one Jefferson Davis 5 cent blue-green stamp with May 7 postmark; the other with two Davis 5 cent and one green 10 cent stamps, with red LA postmark.

All letters and envelopes with uniform water markings, as if they were together and became damp on board a vessel.