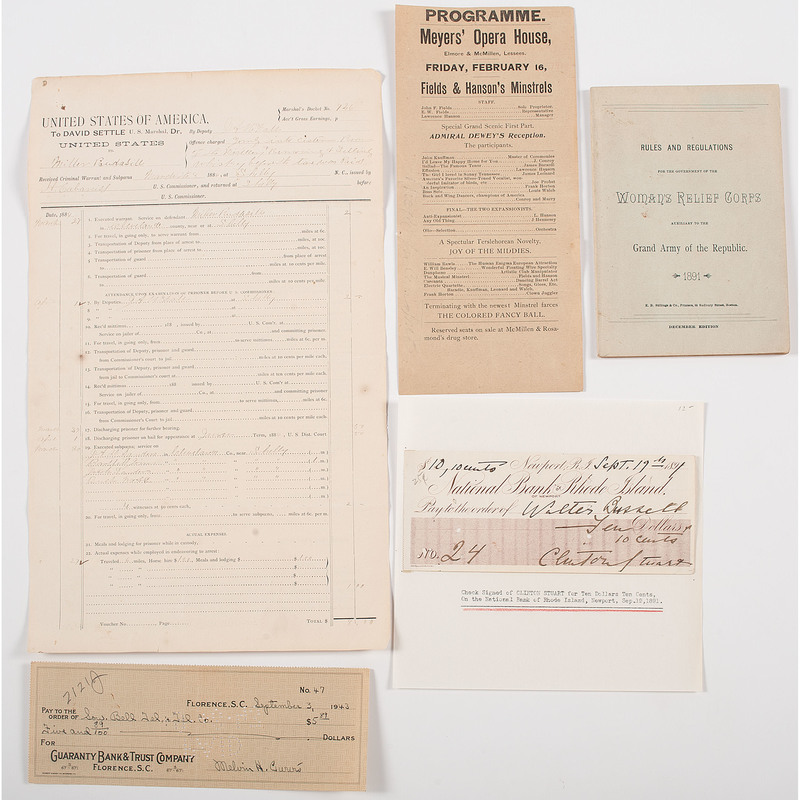 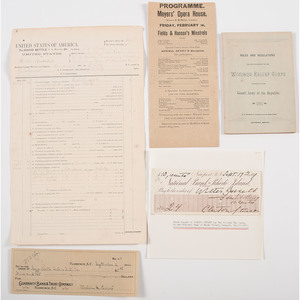 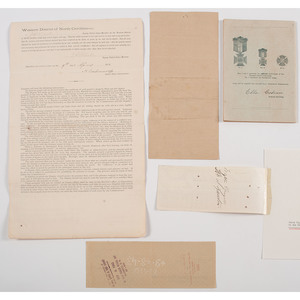 Bill for US Marshal's Service, for numerous services. Approx. 9 x 14.75 in. This one dated March 28, 1886. This one for services related to Miller Rudasill, for "going into cistern Room of the Distillery & Removing & Selling whiskey before the tax due paid." For this one, US Commissioner, H. Cabaniss to execute a warrant, attend the examination of the prisoner, discharging the prisoner for further hearing on posting bail, executing subpoenas on four other people and travel expenses, for a total of $8.00.

Booklet, 4.75 x 7 in., "Rules and Regulations for the Government of the Woman's Relief corps Auxilliary to the Grand Army of the Republic." Boston: E.B. Stillings & Co., December edition for 1891. 40pp in printed paper wraps. Slight toning (wraps and leaves) but overall clean.

Flier/broadside for Meyers' Opera House; program for Friday, Feb. 16, n.y. 4.5 x 10 in. Fields & Hanson's Minstrels. the first part of the show includes "Admiral Dewey's Reception." 1900 was a year when Feb. 16 fell on Friday. The next year in which that happened was 1906, and by then much of the Spanish-American War "hoopla" had quieted down. The last part of the show was "The Colored Fancy Ball."

Check signed by Melvin H. Purvis, drawn on the Guaranty Bank & Trust, Florence, S.C., dated 3 Sept. 1943 (made out the the phone company). Melvin Horace Purvis II (1903 - 1960) was an agent of the Federal Bureau of Investigation (1927-1935), and became known for leading manhunts for a number of the FBI's "most wanted." He claimed to have tracked down Baby Face Nelson, John Dillinger and Pretty Boy Floyd. After Purvis killed Dillinger (1934), J. Edgar Hoover seems to have become jealous of Purvis' name recognition, and apparently Purvis was "sidelined" by Hoover. Purvis resigned in 1935 and turned to the practice of Law in his home state of South Carolina. During WWII he served in Army intelligence and assisted with evidence against the Nazi leaders during the Nuremburg trials.