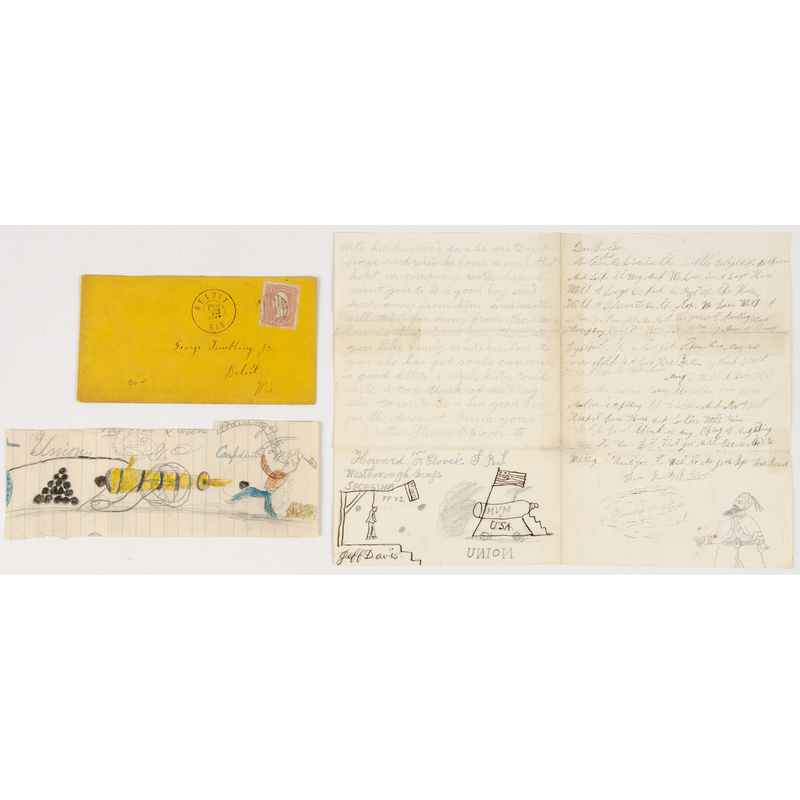 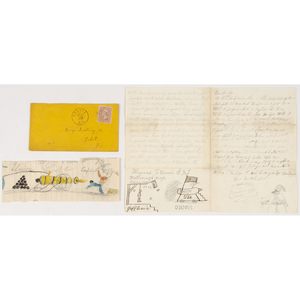 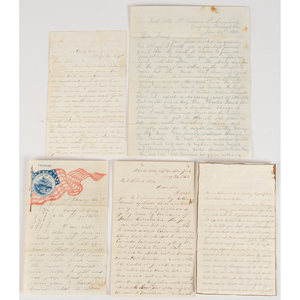 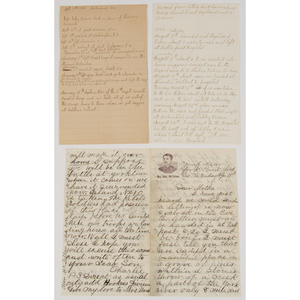 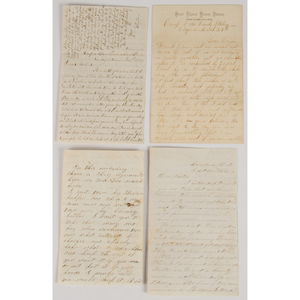 Lot of 75 war-date letters written by Union soldiers and civilians concerning reasons for enlistment, draft dodging and cowardice, patriotism, key battles and campaigns, camp life, and more, 1861-1865. Soldiers belong to regiments from Connecticut, Illinois, Indiana, Maine, Michigan, Missouri, New Hampshire, New Jersey, New York, Rhode Island, Vermont, and Wisconsin, and many are written from camps or hospitals in the South. Letters span the duration of the conflict and, taken together, provide a richly detailed and compelling narrative of the experiences of a Union solider during the Civil War.

Some letters were written just prior to soldiers’ enlistment or just after their arrival at camp and include reflections on patriotism and duty during such a trying time, such as is found in a letter from J.A. Morlan to his parents, written July 20, 1862, wherein he asks their permission to enlist: “. . . It is my duty that my country requires of me to volunteer myself for her service. I have weighed the matter well. . . if the Country needs help bad enough to accept of such men and boys as have went from here. . . that duty calls me to go and also that duty requires you to give me up cheerfully.” Morlan enlisted just a few days later as a private with the 107th Illinois Infantry. John Jessup, a private serving win Co. I, 23rd Michigan Infantry, relates to his family the particulars of his initial examination just after his enlistment, October 4, 1864: “I sit down with feelings I cannot describe to inform you that I am a soldier. I have been examined and [accepted] and got on the soldier regiment after stripping naked and holding up one foot and hopping across the room and back again on the other. And after making several movements such as putting my knee to my head, and bending over to the floor, they looked in my mouth and dismissed me.” In another letter, new recruit Cyrus Ladd, Co. G, 13th Maine Infantry, tells his father of the harsh conditions he has already encountered at Camp Beaufort, August, December 1, 1861: “[Despite the cold], we were not furnished with an overcoat until Thursday night. . .we are not furnished with undershirts. Thursday we did not do anything to eat. We did not get any stove either so we slept in the Arsenal.”

Other letters propose alternative strategies to avoid enlistment, including the hiring of substitutes, as described by draftee A.H. Ryder of New Jersey to cousin Jacobus Lake, Jr., February 23, 1865: “Overtaken by the ‘call’ in Sept. Last, I paid $825., for a one years substitute. . . my consolation under the exigency is, that my man is well paid; and fights accordingly!. . . I trust he is giving big-licks to the belligerent traitors and that the rebels will all be in the ‘last ditch’ and buried before I am called to arms again!” Another interesting piece of correspondence exchanged between two postmasters on August 21, 1862 reveals their rogue attempts to track down Theron Chamberlain, a draft dodger, using letters he has mailed and received: “The Young Man left here [Woodville, New York] Saturday Aug 9th to avoid a draft. Circumstance are strong that he intended to leave for Canada but failed in getting the boat. . . No man subject to a draft should get off in such a way, nor shall they if I can be the means of stopping them.” For those unable to evade conscription but still too poorly prepared for the atrocities of war, “drumming out” was an ignominious punishment for their desertion, as Private William Henry Holmes, Co. E, 6th Vermont Infantry, relates to his father on June 20, 1863 from a camp near Fairfax Station, Virginia: “Before [the 26th New Jersey Infantry] left we drummed out of service 41. . . damned cowards. . . to the tune of the Rogue’s March. They lose all of their pay and go to the ripraps for three years.”

Explicit battle content centers on engagements at Cold Harbor and in Fairfax County, as well as the Siege of Yorktown and the Atlanta Campaign. Also with expository descriptions of Ambrose Burnside’s “Mud March” and a POW’s transport to Libby Prison. On January 2, 1862, Private Daniel Gilson, Co. C, 4th Vermont Infantry, writes to his sister from Camp Griffin about his unit’s twelve-mile trek to aid the 13th Pennsylvania Reserves, commonly known as the Bucktails, in battle: “The Buck Tales [sic] drove [the Rebels] across the bridge and then the Rebels burned the bridge to keep the Buck Tales from a crossing. . .we should have gone across the bridge if they had not burned the bridge.” A letter from April of 1862, sent from a camp near York Point, Virginia by “Charlie” to his mother, tells of his difficult voyage by steamer from Fortress Monroe to Yorktown, noting that “the Rebels had possession of this place only 3 days before we landed here. Our troops are landing here all the time now. . . the Rebels left a nice lot of boats for us, we have 4 in our company.” From a camp near Falmouth the following January, a wagon master named “Charley” share with his friend fascinating details of General Burnside’s ill-fated “Mud March,” which began on January 20, 1863, writing in part, “The Army are again on the move, or rather on the attempt to move, but the Mud Oh! Mud is beyond description. . . the roads present a woeful spectacle: wagons sunk half out of sight, mules tangled and floundering in every shape. . . Mud is Commander in Chief and has ordered the army to halt!” Also with content related to General George McClellan’s attempt to cross the Potomac. Concerning the Battle of Cold Harbor, Captain Fred B. Doten, Co. F, 14th Connecticut Volunteers, shares that his unit is “constantly under fire. At this moment [June 8, 1864] the bullets from the Rebel sharpshooters are rattling through the trees on all sides. . . The whistling of bullets & screaming of shells is more discordant than ever.” Finally, an engrossing account of the Atlanta Campaign, specifically the Battle of Peachtree Creek, comes from Captain James Richard Carnahan, Co. I, 86th Indiana Infantry, from a camp in Georgia on August 5, 1864: “The crossing of [Peachtree Creek] in the face of the enemy, in which engagement the 59th Ohio and our regiment had the advance, crossed the stream and drove the enemy from his works and took possession of them. . . the rebels attacked the line established by our div the day previous. . . [and] massed his whole force against McPherson. . . but in this the Rebels made a most [single] failure with a loss of over six thousand killed. . . We are now investing the enemy’s works directly around Atlanta. . . we are rapidly bringing the lines into such a position that the enemy will be either forced to evacuate or come out of their works and fight us on ground of our own choosing.” Also with vitriolic content concerning the cowardice of wartime “correspondents at the front.”

Other content includes a humorous testament to the medicinal benefits of bourbon, a furlough request to attend to motherless children facing neglect from their current caregivers, dense clouds of blowflies attracted to the corpses of soldiers and horses, hardships facing Southern civilians, and a poignant account of a deceased brother’s final moments alive. Also with keen observations on the native flora, fauna, and citizenry of locales including Georgia, Louisiana, Maryland, South Carolina, and Virginia, as well as reports of encounters with Civil War personalities including Johnny Clem, Ulysses S. Grant, and Lew Wallace. Lot includes two examples of illustrated letters, depicting a Confederate soldier struck by a cannon ball, a Zouave, and Jefferson Davis suspended from the gallows.