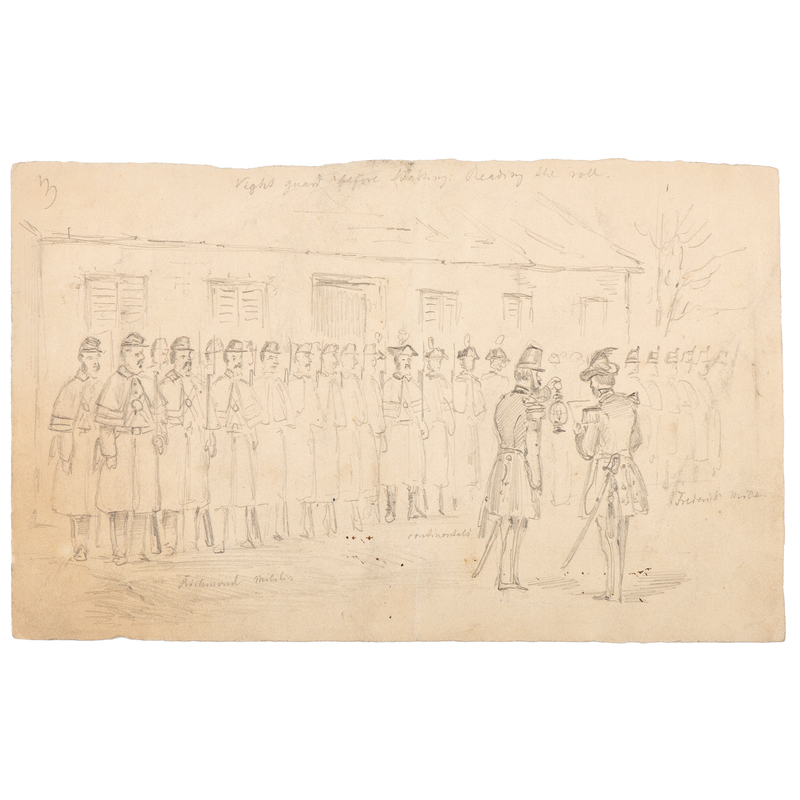 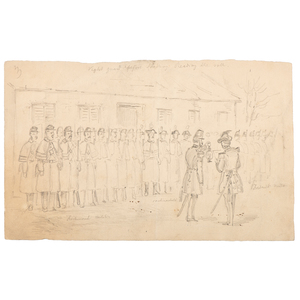 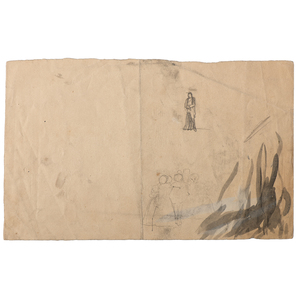 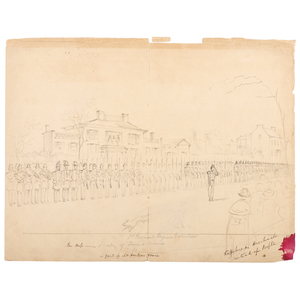 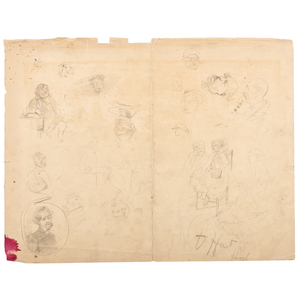 Berghaus was a noted 19th-century lithographer, engraver, and illustrator. He worked as a sketch artist for Frank Leslie's Illustrated Paper when he made these pencil drawings capturing the unfolding saga of John Brown's trial and execution. The first drawing, "Night Guard," was engraved and published in the Dec. 10 issue of Frank Leslie's Illustrated Paper with the caption "Meeting the Picket Guard - The Officer Reading the Roll and Giving his Directions Previous to the Guard Going on Duty for the Night." Unlike the engraving, however, this drawing provides specific names for the Virginia militia detachments forming the picket guard, identifying them left to right as "Richmond Militia" (Richmond Greys), "Continentals" (Continental Morgan Guard), and "Frederick Militia." The larger of the two drawings, "Parade of 1st Regiment Virginia Volunteers," shows the regiment drawn up before "Hunter Hill," a mansion owned by the chief prosecutor of the Brown trial, Andrew Hunter. The scene suggests a festive occasion with field musicians playing to the left of the line, three women in hoop skirts observing the troops from atop the mansion's portico, a crowd of spectators in the lower right foreground, and a frolicking dog in front of the impressive line of militia. Notably, the mansion sketched here was burned to the ground in 1864 by Union General David Hunter, prosecutor Andrew Hunter's own cousin. "Parade of 1st Regiment Virginia Volunteers" is believed to have remained unpublished.

Both drawings have a number of small sketch portraits and doodles on verso, with the portraits seemingly serving as studies of major figures in John Brown's trial. Neither drawing is dated, however, both would have been drawn in the weeks or even days leading up to Brown's execution on December 2, 1859. Though Berghaus did not sign these illustrations, there is little doubt that they are his work given the near identical style and execution of these drawings to the two other known Berghaus views of Brown's execution: "John Brown Brought Out for Execution" (National Portrait Gallery, Smithsonian Institution) and "Execution of John Brown at Charlestown, VA" (Virginia Museum of History and Culture). Berghaus is considered to be one of the most talented wartime illustrators, and his original work is exceptionally scarce.