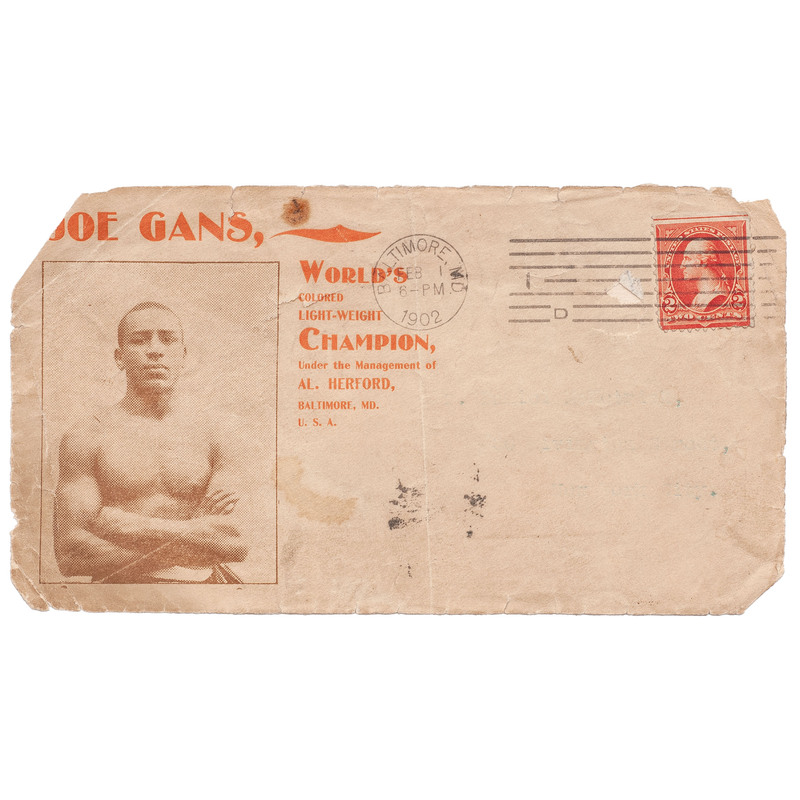 Issued when Gans was recognized as the Colored Light-Weight Champion and just 3 months before he would claim the lineal World Lightweight Title from Swiss Frank Erne in a knockout in just 1 round, becoming the first-ever African American boxing champion. He would defend his title against 13 boxers before losing to Oscar Matthew "Battling" Nelson  (1882-1954) twice in 1908 while suffering from tuberculosis.

Gans began boxing in 1891 in his hometown of Baltimore. He convincingly won the World Lightweight Title in 1902 from Frank Erne. Starting in 1903, Gans began to take fights in the welterweight class and won several fights against excellent boxers including Sam Langford, Barbados Joe Walcott, Jack Blackburn, and more. Indeed, by modern record-keeping standards, Gans would have been considered Welterweight champion. Welterweight was not a marquee class in this period, however, and did not earn large purses. There were several pretenders to the title who claimed that Gans had “abandoned” the title by fighting in the welterweight division. By 1905, Gans was without a manager and dire straits financially. It was in this atmosphere that his most important title defense came with a blockbuster fight against Oscar “Battling” Nelson in the gold rush boomtown Goldfield, Nevada on September 3, 1906.

The Goldfield fight proved to be the pinnacle of his career, as he would succumb to tuberculosis. While no clear diagnosis exists, many historians speculate that he already was infected at the time of his first fight with Nelson, possibly as early as 1904. Gans would continue to successfully defend his title the next two years with his last successful fight against Rudy Unholz on May 14, 1908. Later that year, when he was decidedly suffering from the effects of tuberculosis, he would lose the title in a rematch with Nelson in Colma, California on July 4 and again on September 9. He would die at just 35 on August 10, 1910. Today, a statue of Gans graces the lobby at Madison Square Garden and is rubbed by modern boxers for good luck.

Tanned, chips to edge with loss to upper right. Only front of the envelope is retained. Some ink stains.