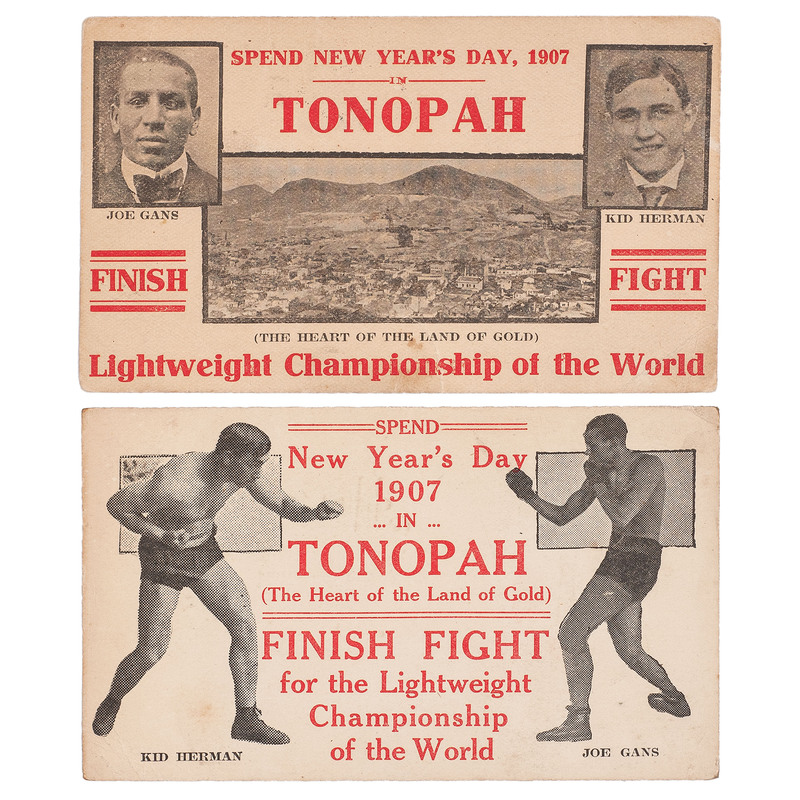 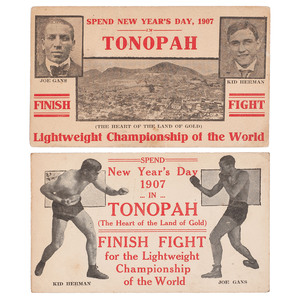 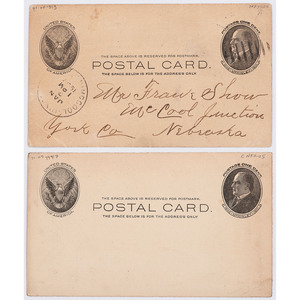 Lot of 2 postcards related to the January 1, 1907 fight between Joe Gans and Kid Herman in Tonopah, Nevada, comprising:

Postcard featuring photographic portraits of Gans and Herman alongside an aerial image of Tonopah captioned "(The Heart of the Land of Gold)." Titled in red: "Spend New Year's Day, 1907 in Tonopah / Finish Fight / Lightweight Championship of the World." Postmarked the day after the fight, Jan. 2, 1907 to Mr. Frank Show (1864-1943) in McCool Junction, Nebraska.  N.p., 1907.

Postcard with photographic images of Gans and Herman in fighting poses. Titled in red: "Spend New Year's Day 1907 in Tonopah (the Heart of the Land of Gold) / Finish Fight for the Lightweight Championship of the World." Postally unused. N.p., 1907.

The bout with Herman "Kid Herman" Landfield (1883-1934) was the first fight for Gans after his victory over Battling Nelson on July 4th the previous year. The Old Master would quickly best the Canadian by TKO in 8 rounds.

The Goldfield fight proved to be the pinnacle of his career, as he would succumb to tuberculosis. While no clear diagnosis exists, many historians speculate that he already was infected at the time of his first fight with Nelson, possibly as early as 1904. Gans would continue to successfully defend his title the next two years with his last successful fight against Rudy Unholz on May 14, 1908. Later that year, when he was decidedly suffering from the effects of tuberculosis, he would lose the title in a rematch with Nelson in Colma, California on July 4 and again on September 9. He would die at just 35 on August 10, 1910. Today, a statue of Gans graces the lobby at Madison Square Garden and is rubbed by modern boxers for good luck.